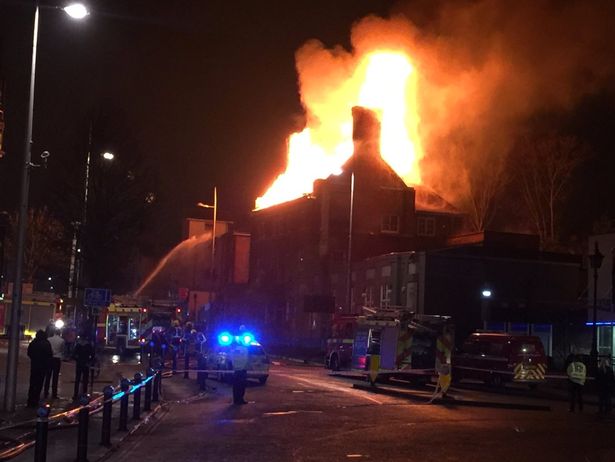 West Acton cabaret venue The Aeronaut was ablaze last night just half an hour after partygoers saw in the New Year.

Around 340 revellers and 12 staff fled the Aeronaut when the alarm was raised. Online footage obtained by the BBC and The Mirror shows the venue alight as over 70 members of the London Fire Brigade tackled the flames. The LFB rescued six people from a first-floor flat above the pub; the neighbouring police station was evacuated too. Three police officers who assisted in tackling the fire are being treated for smoke inhalation. The London Ambulance Service said it took five patients to hospital suffering from ‘minor injuries’.

The venue has been seriously damaged. An LFB spokesman said, “Half of the ground floor of the building is alight. The first and second floors, including the roof of the three-storey building, have been gutted by the fire.” The blaze was finally brought under control by 5am.

The cause of  the fire is not yet known. The police have said the cause was not believed to be suspicious while the LFB have said it was unknown.

We're fine but 2017 has already got off to a bad start. One of our favourite venues that we just played burned down. Everyone is fine.

Manic. We were upstairs, had to get on a roof area and luckily found a ladder we could climb down. Scary stuff.

Today I must shop for a new Luke Reel costume. Gig tomorrow and my other costume is currently ashes.

According to The Metro, Blair said that he had heard that ‘some idiot’ used a candle to light a branch on a Christmas tree but he was unable to verify this.