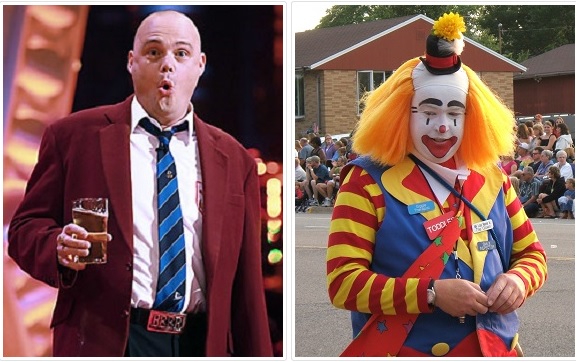 Which of these will be the next MP for South Thanet?

The voters of South Thanet will have a touch choice in May. Should they vote for a clown or a comedian (or someone else entirely)?

Comedian Al Murray today announced that he would be standing against Nigel Farage in the upcoming general election. As his alter ego The Pub Landlord, Murray hosted variety nights last year at the London Wonderground.

The Essex constituency will have a tough choice on their hands. Murray’s opposition are, apparently, are all red-nosed mimes with UKIP labelling other parties as “Westminster clowns” and those other parties using the same epithet back at them.

Whether he will be returning to the London Wonderground after the general election is doubtful: his manifesto makes a compelling case which the voters of South Thanet will find it hard to ignore.

His manifesto comprises many eye-catching policies.

The NHS: “If you come to A&E and it’s neither an accident nor an emergency, then you will be sent to a random hospital department to be practised on. Common sense.”

Foreign policy: “Germany has been too quiet for too long. Just saying.”

Immigration: “Of course the reason they are coming here is because this is the greatest country in the world. The only way to stop them is for a government to change that and make things a whole lot worse. Look no further. However, in the meantime, we brick up the Channel Tunnel. With British bricks. Probably have to get some Poles in to do it. Common sense.”

Education: “I believe the children are the future and there’s no way you’ll get me knocking teachers. Teachers are on the front line, the coalface. Doing their bit to create a level playing field for our kids… although I’m not sure they’re going about it the right way by making sure none of the kids can read and write. So, instead of a postcode lottery, a new improved Street Raffle will determine which schools your kids get in to. Common sense.”

Scotland: “Alex Salmond to be made First Minister for Norwich, so he can get to understand what being ignored by the rest of the country is really like. Common sense.

Europe: “I pledge that the UK will leave Europe by 2025 and the edge of the Solar System by 2050. Common Market sense. In the meantime, Greece to be bought and operated by Kent County Council. Couldn’t be worse. Someone to do the bins at least.”

The environment: “Boris Johnson to be put on an island. He keeps saying that’s what he wants.”

Homes for hardworking families: “Build some houses, but without bringing down house prices. How hard can it be?”

Defence: “National Service, but only for people who don’t want to do it.”

Law and order: “Unemployment causes crime: I propose to lock up the unemployed. Common sense.”

On local issues: “South Thanet to be made the new capital of the UK. Demilitarised zone to be set up between North and South Thanet.”