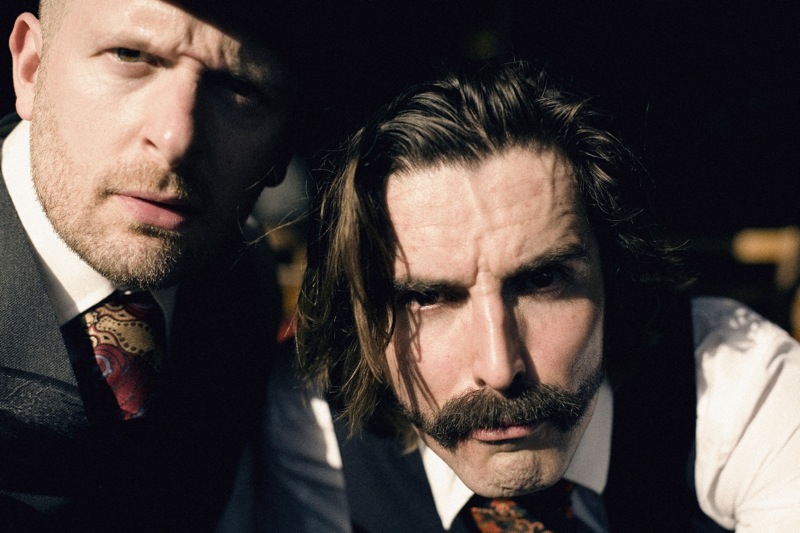 Veteran duo The Moonfish Rhumba may no longer be with us but their legacy includes a classic video for a real earworm of a song.

One of the few acts to successfully bridge the worlds of comedy and cabaret, The Moonfish Rhumba were equally at home at monthly cabaret showcase Finger In The Pie (celebrating its sixth birthday this Sunday) as they were at character comedy chucklefest The Forgery Club.

Filmed on the outside wall of Highbury Girls School, the shoot comes with an intriguing story. “We shot the film very quickly, commando style,” says Dan Lees. “It was a very cold and wet day and the pupils began to notice us as  we were filming. We didn’t want to get arrested dressed as schoolgirls outside an all-girls school. It might have been a little difficult to explain!”

The  origins of the video are no less interesting and, in songwriter Lees’s case, a little embarassing. “I was inspired by my mother who was a feminist activist (here she being interviewed by Ali G). When I was around 10 years old, I wrote a song called ‘We’re Feminists and We’re Proud’ with my best friend. So basically the influence for Lesbians Forever came from the ridiculousness of two primary school boys writing a song about being feminists. I wanted the song to express the same kind of naive idealism.”

Lees and Combes have since moved on to very different projects. Combes left the stage behind for a stab at national politics. He ran for Parliament last year as Mr Mozzarella, an Independent candidate affiliated to the Don’t Cook Party. Here he is, completely stealing the limelight from eventual winner Andy Sawford.

In Lees’s case, he is filming a video for Lowestoft’s Premiere Caravan Park. The song is part of his new project Modern Dreams, a collaboration with Kitten Von Strumpet. Lees explains: “the idea is that we’re a real-life couple who had a string of hits in the 1980s. After our career nosedived and now we run a caravan park in Suffolk.” You can see Lees’ new project tonight for free at  the Lost Theatre.