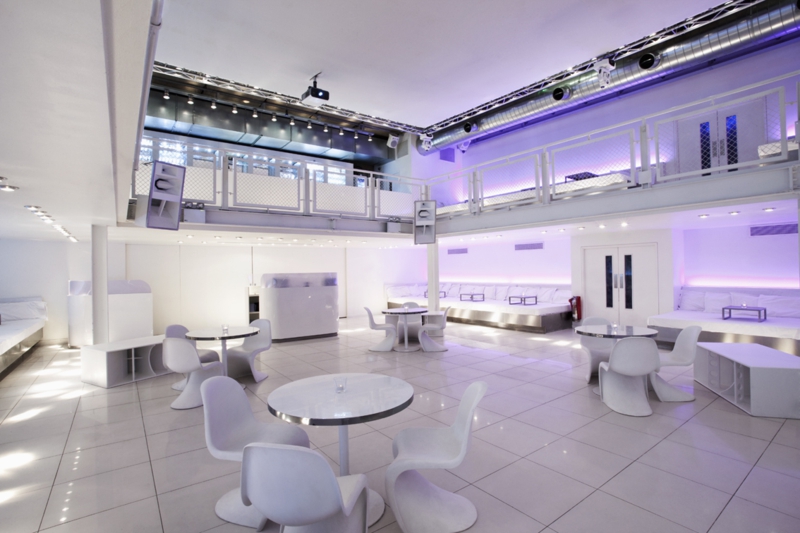 Supperclubs: they’re not just about the live entertainment. Charging considerably more than the average venue, we have seen many attempts by these establishments to marry fine dining and cabaret. In a new series, we pull back the curtain and investigate what’s on offer, who goes there and whether you should too. We start by sending foodie and cabaret lover Janan Jedrzejewski to the iconic Supperclub. 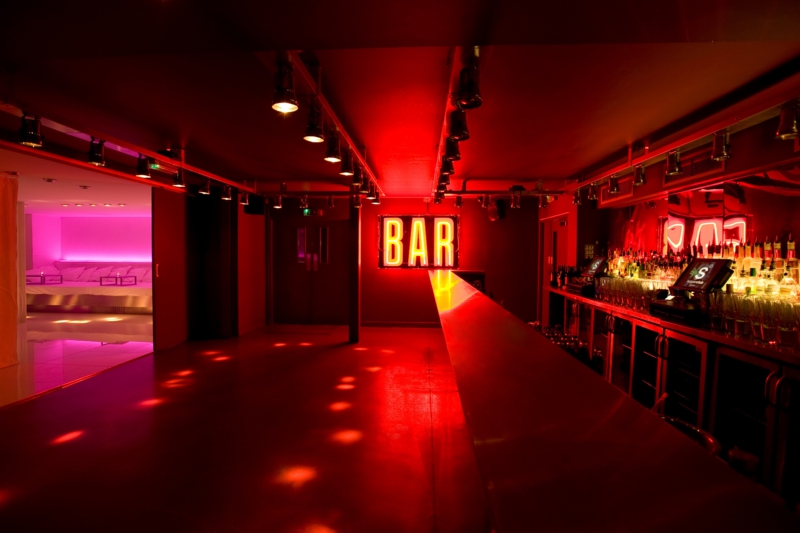 Supperclub’s lobby bar is all about the backless sofas and the dim lighting.

Part of a brand started in Amsterdam a generation ago, the London branch of the Supperclub empire is a hop, skip and jump from Ladbroke Grove station. Nostalgic clubbers may remember the venue as that of the famous 1990s boogieshack Subterreanna which attracted the likes of the Red Hot Chilli Peppers. Built under an A40 flyover, the venue’s unprepossessing exterior couldn’t be greyer or grimmer. Take one step inside, though, and that all changes.

While some clubs make use of disaffected Dalstonite doorwhores to handle arrivals, Supperclub employs one of cabaret’s hidden gems as combined doorman and jester. I never found out whether he’s connected wirelessly to the National Grid but it would explain a lot. His boundless energy carries him from throughout the night as, after seeing in the last of the guests, he joins in the proceedings moving from guest to guest, joking, japing and taking photos for people. Later, I see him dancing around occasionally alone but never without an effervescent and infectious smile.

I wanted to take time out from the biennial borefest that is international football so I venture there to check out their appropriately named evening F**k Football. Arriving early and airlocked in the bar, I sample a Dirty Little Doll – a light, tart champagne-pomegranate Mojito. It’s a narrow space, a block of blazing red, with backless sofas, silver-flecked marble flooring and sultry (unflattering) dim lighting.

The main space is awash with a starkly contrasting white. A long bed runs along the walls in the absence of tables. Derided by the unadventurous as ‘impractical’, it’s extremely comfortable. When eating, the small, elongated dishes can be held, or placed on the little bed- top table. It’s not exactly mission impossible.

The bit in Catcher in the Rye where our hero Holden peers into the other hotel rooms? Yeah. That.

It’s an idiosyncratic and voyeuristic set-up. Girlie groups daintily sip wine. The suited City Boy bubbly fuelled birthday bash is toasting, laughing. It’s a people-watching paradise and no one seems to mind. The atmosphere is so utterly chilled out.

The intimate seating arrangements lend themselves to the cabaret atmosphere once the entertainment starts. Empress Stah is a Supperclub regular and for this show has put together a special routine. For the uninitiated, the Empress is a mixed discipline marvel who has a repertoire of circus skills, burlesque and a joyfully perverse imagination. Arriving in a sexy football outfit, some nifty aerial hoopwork is followed by a quick strip and the production of a large rubber dildo from her underwear. Nearby audience members don’t have time to gasp before they are sprayed with the prosthetic’s watery contents. The routine’s money shot comes courtesy of a can of lager which Stah shakes and poured over her near-naked body. The second act lacks Stah’s lewdness but makes up for this for this with it’s wackiness. Amsterdam’s Electric Meat Duo are a curious couple combining choruses of opera (apparently lipsynced) with a dynamic bull-fighting routine.

In true supperclub style, you get what you’re given. The four-course dinner kicks off with a glass of fizz followed by miso soup, loaded with the traditional tofu and wakame. However, the additional chillies pack a pointlessly distracting punch – If you’re going to mess with my miso, please do something spectacular with it. The foie gras (the cruellest yet most delicious of foods) is wonderfully light and fluffy, perfectly balanced with a side of sweet apple compote. The thinly sliced main of lamb is melty soft, drizzled with a flavourful ratatouille purée. Ice cream bombes are plated up on silver trolleys amongst the shakers on the dance floor. The half shell of delicious dark chocolate filled with tropical foam, balanced on Pina Colada ice cream requires skilful deconstruction, and leaves you with chocofingers, despite how demurely you try. There’s something delightfully naughty about indulging in a messy multi-dimensional dessert on a bed with crisp, white sheets; which makes me half-suspect it was done on purpose. 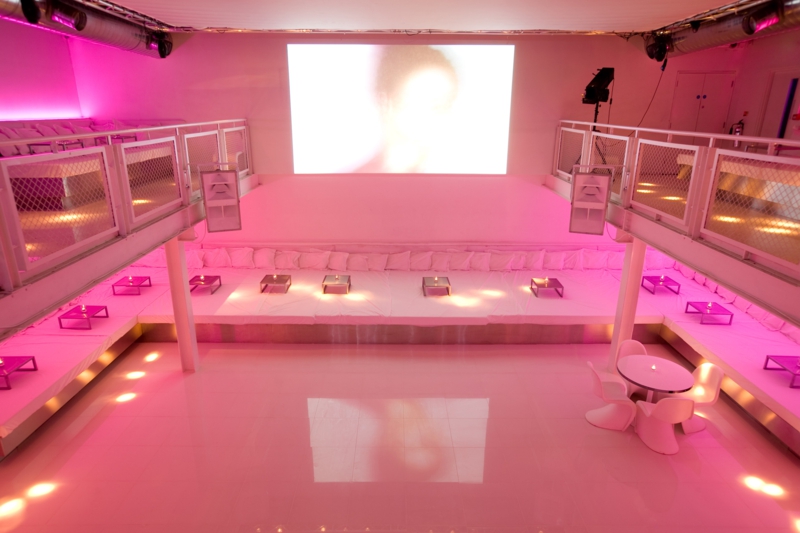 As well as the intimate downstairs space, there are beds and tables in the upstairs balcony area.

The food is top-notch, and it’s no surprise that Michelin star chiefs regularly take up ‘guest spots’ here.  The current entry fee is £49.50 covering cabaret and food while cocktails (I don’t do beer) are around £10 each so this is never going to be a cheap night out but given the quality of the food, entertainment and the convenience stepping off your bed into a nightclub, it is certainly an incredible night out nonetheless.

I’m currently constructing another excuse to go back. Not that I need one…

Photos courtesy of the venue.