Tongue Fu Gets Us Tongue-Tied at London Wonderground’s Spiegeltent 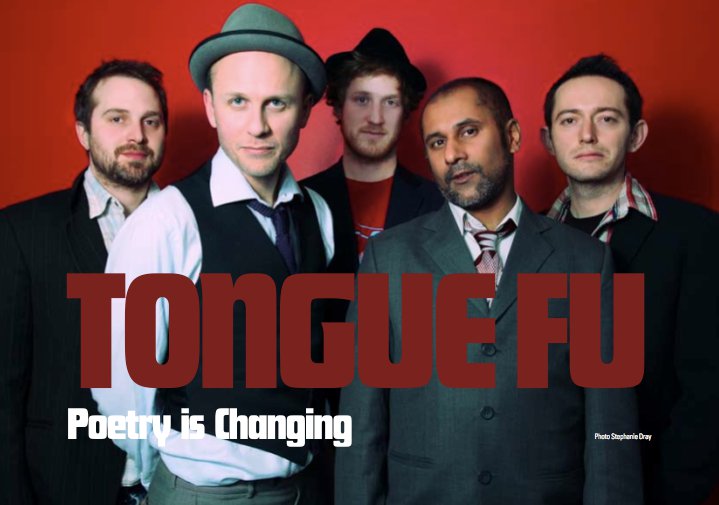 London Wonderground hosts spoken word night Tongue Fu but nobody really knows what is going to happen – not even the performers. 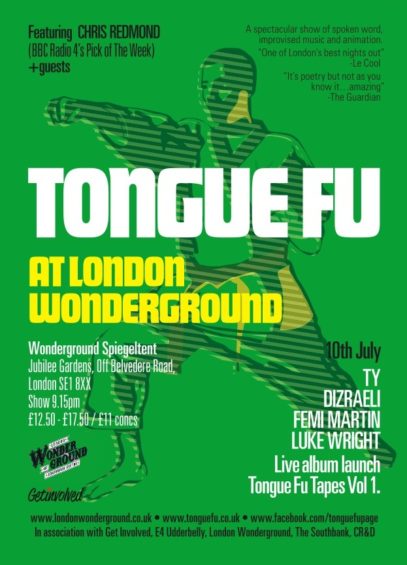 Tongue Fu is one of those nights where you really don’t know what you’re in for. An improvised night of spoken word and music could be a completely nonsensical car crash of an evening. It’s an unrehearsed, improvised spoken word night where each writer comes up on stage to recite their poems, flash fiction, raps, stories – whatever style they write. The three musicians, keyboard, double bass/bass guitar and drums, will play music that suits the piece. Some of the writers, for example British hip-hop artist Ty, will ask for some action music to punctuate their story, whereas some, like rapper Dizraeli will specify something melancholy “and when the drums are meant to come in, you’ll hear it”. Incredibly, the drummer does just that.

The show makes a fine case for how well the musical ear and written word  can work together intuitively. It’s certainly a daunting prospect as a performer and for writers and musicians alike, Tongue Fu makes them work hard and think on their feet.

The evening is hosted by the energetic and ever-beaming poet and musician Chris Redmond. He warms up the crowd with a few spoken word pieces although, as he points out, he is very used to these events (he started Tongue Fu in 2007) and so the improvisational element was not quite so intimidating to him. It is still fun, he asks for the audience to call out various words to describe types of music and the band end up playing “broken ragga gospel” over an amusing piece he has written about Kenny G and jazz. He then performs a piece about needing cheese at 10pm, which is reminiscent of Tim Minchin’s Cheese song but no less funny for it.

Dizraeli is up next and he is open and attentive with the band, something that makes for an interesting spectacle as they merge two separate pieces live on stage. To see this performance being worked out live is exciting from the musical and the wordsmith point of view. Dizraeli raps and sings throughout his set. He opens with an emotional piece about loss, which is a rather jarring pace change from Redmond as it is much more contemplative. He is very talented and engaging to watch, often singing into an audience member’s eyes, but it feels like a lot of emotion to deal with so early on.

Next up is the delightful Femi Martin. She quips about her sore foot and the time it takes her to get to the stage and then, when she fluffs her first piece, she jokes about the mistake being for her mum, who was in the audience and had that day pointed out she’d never seen her daughter mess up before. Martin writes and performs flash fiction, and the band picks up her mood seamlessly, slowing the pace for the sadder parts of each story. Martin’s stories have a habit of lulling you into a cosy narrative and then stabbing you with searing truths and sadness. It is her third time at Tongue Fu and it would be great to see her back for a fourth.

Luke Wright is next and strides on saying “right, I’m going to lower the tone”. He starts with a Noel Coward-style piece, the story of Jeremy who liked to draw cocks on everything, which the band accompanies in a camp and lighthearted way that suited the words well. Irreverent and very funny, Wright gets into his stride with the “B Movie” piece, if anything impressive for his ability to remember so many words that begin with “B”.

And so to the main event, Ty. Mercury Music Prize-nominated artist Ty has a catalogue of famous names that he has worked with so it is expected that he will come on and rap. Ty comes on the stage and quickly apologises for being jet-lagged. He does attempt a few songs but messes up the words and then decides to use the band to accompany stories about his father. These stories are funny and uplifting, and even though at one point he mentions that he is aware he’s “there to rap” he seems more at ease directing the band to play along to his anecdotes. It’s a really relaxed and sweet way to end an enjoyable evening of diverse talent.