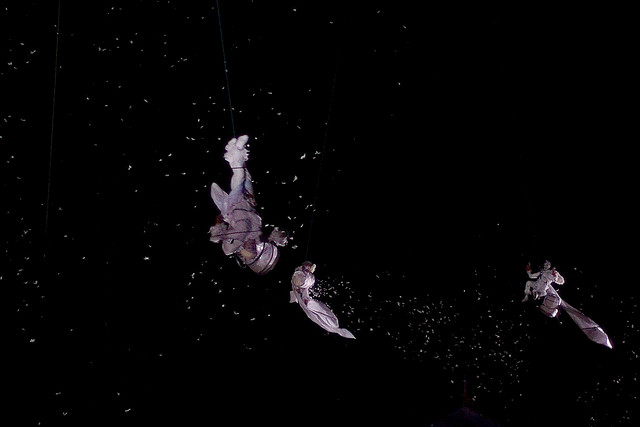 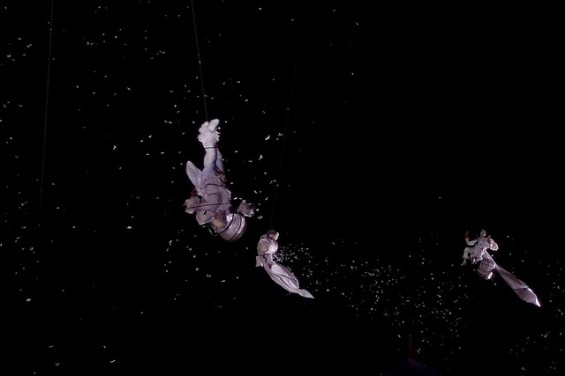 French aerialist troupe Place des Anges will be dropping 1.5 tonnes of feathers on the audience.

As part of the London 2012 Festival, Piccadilly Circus will be transformed today into an outdoor circus arena.

The area around Piccadilly Circus, Regent Street, Lower Regent Street, Waterloo Place and Shaftesbury Avenue will be pedestrianised and over 250 circus artists from 17 nations will be performing across twelve stages have been set up at street level and higher.

From 1pm until 8:40pm, the public are invited to see a kaleidoscope of talent. Aerialists, high wire trapeze artists, tightrope walkers and aerial dance performers will be dominating the skyline. At ground level, there will be a mixture of more traditional big top entertainment like clowns and stilt acrobats alongside musicians (including a beatboxer) and BMX street dance.

London Mayor Boris Johnson will be putting in an appearance as will Culture Secretary Jeremy Hunt and Ruth McKenzie, Director of the London 2012 Festival. Whether BoJo can be persuaded to become an aerialist once more remains to be seen but he and his fellow VIPs can be found at the statue of Eros* at 2:30pm.

From 8pm, Place des Anges take over the area for a special finale to the day’s events. The French aerialist troupe specialise in spectacular outdoor events which can, at first sight, appear to be surreal airborne pillow fights. Soaring 34 metres over the audience on three zip wires strung across Piccadilly Circus, including one on top of the iconic lights themselves, the performers will release around 1.5 tonnes of feathers onto the audience. The video below is a pretty good idea of what to expect.

Piccadilly Circus will be closed to traffic until 5am tomorrow morning for the event.