The Inside Story Of Circus Spectacular Bianco 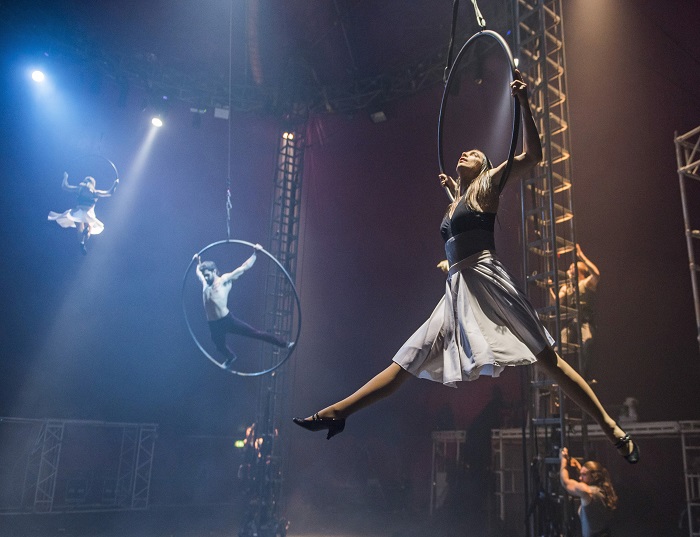 We’ve already told you how much we loved NoFit State Circus’ Bianco. When they invited us to come down to join in their training and meet some of their core crew, we jumped at the chance. Belinda Beveridge reports.

Walking into NoFit State Circus’s Big Top tent and my immediate reaction is “how beautiful!”. In the early afternoon before performance, the empty space is crackling with the atmosphere of things to come.

I’m here for a workshop with Cardiff-based company, NoFit State, whose tent for the contemporary circus show Bianco has landed, spaceship-like, in the Winter Festival at the Southbank. Inside the big top, it is more like one of the gorgeous aliens from new sci-fi flick Arrival: scaffold-like metallic arms stretch upwards, challenging and inviting interaction.

Before I try the counterweight ropes by climbing up these same scaffolds and attempting juggling and hula hooping, I meet Lyndall Merry, head of rigging and performer (trapeze) and the architect of the tent I’m gazing at.

Merry tells me that I am not the only fan of the intricate rigging and I ask where the inspiration for the elaborate setup came from.

The answer he says, is constant collaboration between long-standing NoFit State director, Firenza Guidi, and the riggers. It is Lyndall’s job to translate creative ideas into practice but sometimes they simply don’t happen. This is either because “technical implications far outweigh the benefit of the image” – the classic tension in the creative process between concept and its execution – or, less glamorously, because of safety.

It is this latter aspect that is at the heart of how they operate – something that is not surprising for the dangers inherent in circus – but more interesting is how enthusiastic he is to talk about safety’s role in the creative process.

“There are shows that run on a big production scale and they don’t want their artists to have any information in their brains, because they want their artist to be the best they can possibly be as artists,” he says.

NoFit State takes a contrary view. Their performers must have an in-depth working knowledge of their equipment and the risks across the range of what they are asked to do. During each performance of Bianco, the acrobats double up as performing artists and technical crew: they set up the technical cues, push scenery around the tent and act as counterweights for acrobats.

“The performance exposes the risk.”

This approach to laying bare their show’s innards is to the team an essential aspect of circus, demonstrating the trust and the community element and it is part of the magic for performers and for the audience watching it. “The performance exposes the risk,” explains Lyndall. “And the fact that people do extraordinary things that are risky and but are doing them without bad consequences, that’s the thrill that’s what makes it entertainment.”

“A lot of [our reviews] talk about the feeling of community and support in among the tent that is there between the performers. It’s very much part of the magic of this aesthetic,” he adds.

Circus has actually become safer over the years, even as the creativity and feats have become more inventive. According to technical production manager John Kirk, this is because safety and creativity now work alongside each other whereas, in the past, the two worlds have been very much separate.

For each intricate and considered vision of creativity, there has to be a structure to back it up. Lyndall tells me of examples like “using rigging made of chocolate,” or “making water flow uphill” that he might be asked to create, illustrating the challenge and the ingenuity in his role that is as significant as that required by other members of NoFit State.

Aside from insight into how Bianco’s big top experience has come together, the workshop itself gives me a fine idea of my physical limits and but there’s not enough time to really explore them. We can’t all be in the circus, but we can enjoy feeling part of it in a style that puts us in the thick of it, and which exposes the guts as well as the glory.

Bianco is at London’s Southbank Centre (in the Winter Festival gardens) until 22 January 2017.  https://www.southbankcentre.co.uk/whats-on/117873-nofit-state-circus-presents-bianco-201617