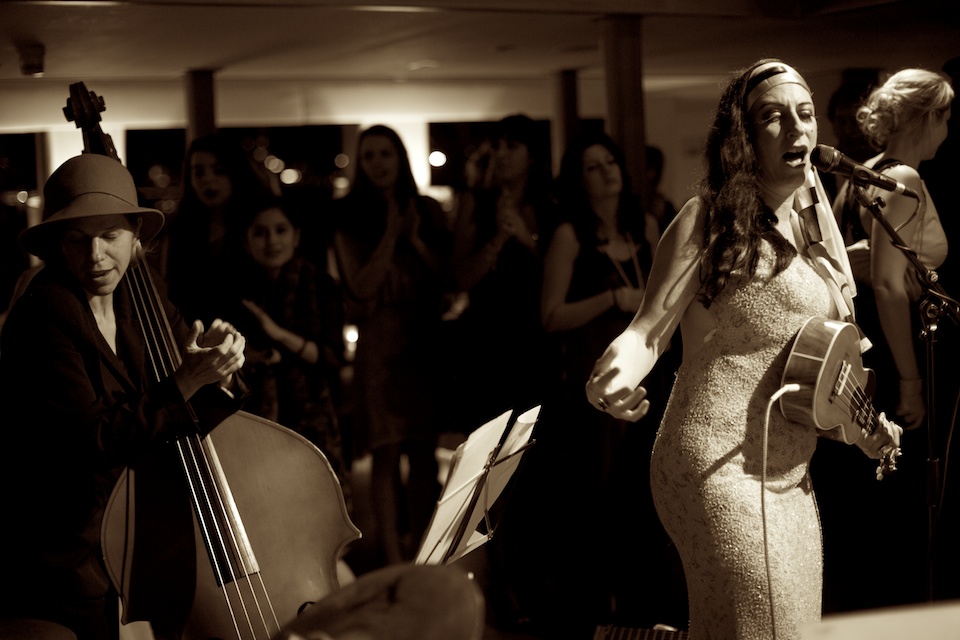 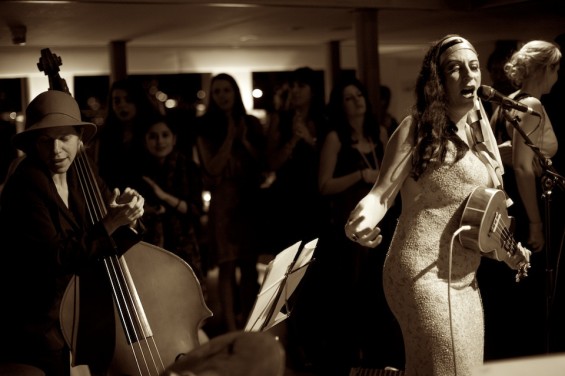 Tricity Vogue and her band (pictured above) were on hand and on board the SS Atlantica.

Few cities around the world can effortlessly blend past, present and future together like London can. Inspired by the American Prohibition era, S.S. Atlantica invites its audience to step into a vintage playground.

Thankfully, the entrance point to this world is not the back of a musty wardrobe but the Savoy pier outside Embankement station. Once aboard, the ship, a tableau is laid out which entices all of the senses. At one end, guests can indulge their decadent side by joining the throng gambling at the casino tables or taking in the live music and burlesque; at the other, they can quaff cocktails while take in views along the Thames and the whiff of the river breeze. Thinking The Great Gatsby meets Bright Young Things and you’re not a million miles (or years) away.

The crowd is predictably biased towards the young but there are a smattering of all ages impeccably dressed up for the occasion with an array of splendid fashion on display: top hats, bow ties, vintage fur coats, pearls, feathers, finger waves as well as the unmistakable allure of Chanel Number 5.

The atmosphere sparkles like the champagne served at the bars by the attentive and smart dressed waiters. There are no awkward silences – far from it, especially when the very sassy and talented Tricity Vogue and her live band start up. They perform two sets of bawdy originals and jazzed-up covers of melodies from the likes of Eurythmics, Red Hot Chilli Peppers and Elton John. 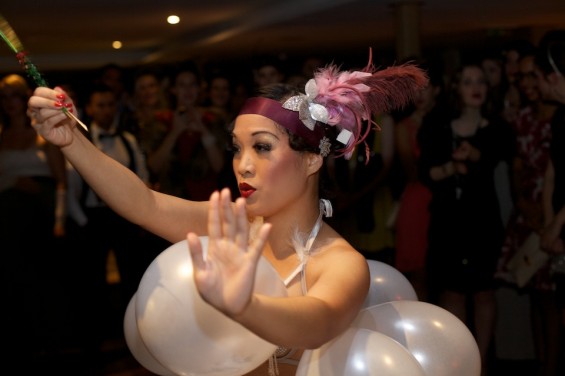 Marianne Cheesecake is a vision with her perfect porcelain skin, carmine bee-stung lips and Charleston frocks.

The floorshow doesn’t stop there. Canadian burlesquer Marianne Cheesecake is a vision with her perfect porcelain skin, carmine bee-stung lips and Charleston frocks. Her classic burlesque routines also complement the night’s mood, a special highlight being her balloon dance with its playful choreography and punchy payoff.

The boat makes its circuit up and down the Thames twice – those looking for an early night (perhaps with a new companion) can scarper ashore when the boat returns to its embarkation point. One of the guests, a well-dressed girl in her late twenties, told me that she enjoyed being part of a world detached from reality for a night. Of course, London does not lack in entertainment and nights out but it is increasingly rare to see retro class infused into a party with the same skill as seen here.

Londoners seeking a night of escapism – not just from their worries but also from the twenty-first century and terra firma, should step aboard SS Atlantica. A night spent beneath the stars and on the waves while supping a beverage of choice and quality is rarely a wasted one. Like the speakeasies of old, Atlantica is a haven away from the everyday and the proscribed. Moreover, don’t be shy – this is the perfect place to practice your lindyhop, find your new favourite cocktail and take selfies as you coast past an illuminated Tower Bridge. The only crash that may happen will have nothing to do with Wall Street and everything to do with energy levels.

More information on SS Atlantica can be found on the official website. The next event is on 30 November.