The Sound Of Sinatra Saunters Back Into Town 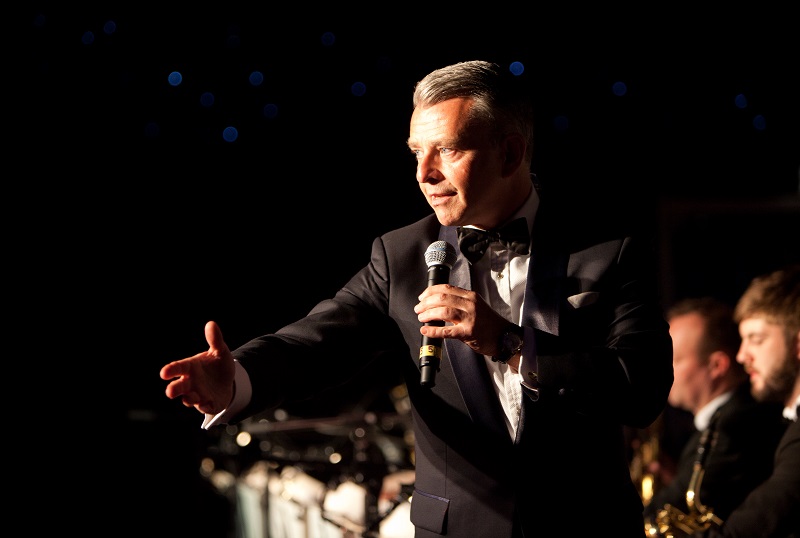 Time to roll back the years as Ol’ Blue Eyes is back in town. Kind of.

His fans call him Francis Albert or The Chairman Of The Board but most know him as Frank Sinatra, the singer-cum-actor who mingled with politicians, mobsters and movie stars when not lending his voice to some of the most iconic tunes of the mid-twentieth century. Even these days, what karaoke night is complete without at last one (possibly not entirely sober) rendition of My Way or New York, New York?

Richard Shelton is an actor-cum-singer and something of a fan of the man whose mellifluous tones inspired many a modern crooner as well as the naming of a certain cartoon dog. He will be familiar to TV audiences as Emmerdale villain Dr Adam Forsythe and, as Sinatra, has appeared in the West End in the award-winning drama Rat Pack Confidential. On 5 and 6 June, he will be taking his Sinatra and Me show to Live At Zedel but before then he stopped by TIC Towers for a quick chat.

Your show “Sinatra and Me” examines 20 similarities between yourself and Frank Sinatra. Which did you find most surprising?

When I played Sinatra in Rat Pack Confidential, it was intriguing to learn that we were exactly the same size. When I put my hands and feet into his imprints on the Hollywood Walk of Fame and they fit identically, it was a great feeling and seeing they were made on my birthday was simply incredible! But when his tuxedo literally walked into my life and it fit as if tailor-made for me, it was just mind-blowing.

Richard Shelton as a child.

What attracted you to Frank Sinatra in the first place?

As you can see from this picture, I noticed a childhood resemblance between me and Frank Sinatra from when I was about six years old so was aware of him from a very young age. I grew up in a house where jazz and big band music was played all the time and when my father bought My Way on cassette in the 1970s, I played it more than he did, learning every phrase and nuance, even though I was only 14 years old. I just “got it”!

You’ve performed with Sinatra’s own band – will there be a live band at your Zedel show?

In some regards, yes!  I’m recording a new song called Sinatra and Me with a 16-piece big band in Studio A at East West Studios where Frank Sinatra recorded My Way and A Very Good Year. I’m bringing the recording with me and will sing to it so, in some ways, I’m bringing the very essence of Sinatra with me too.  One song is sung a capella recreating the moment when Sinatra sang to Ava Gardner over the Hollywood rooftops, so it’s a mixture of big-band and just me with some sensational recorded tracks.

Actors sometimes speak about finding a way into a character, for example through a particular physical or vocal characteristic or an item of clothing. What works for you?

Frank Sinatra had a very specific mouth embrasure and lip movement, which helps me find the shape of a sound. He also had a very groovy way of moving when singing. And of course steady eye contact at the right moment to evoke a certain emotion.

What do you think Sinatra would make of the modern world?

It’s impossible to know, of course, but my impression is that he’d advocate hard work over instant fame. He was from a time when singers learned their trade by performing night after night on the road, which is actually how I did it. To my mind, it’s the best and only way. As for modern day politics, he hated bigotry and discrimination so I think he’d have plenty to say about the state of the world.

You’ve had a long and strong connection with Sinatra. Do you have any plans for his music to be played at your funeral?

Well, not until you asked me that question! But seeing as you ask, perhaps, That’s Life. I completely get the lyric, “I’m riding high in April/shot down in May/but I ‘ain’t gonna let it get me down/because this fine old word keeps spinning around”. It perfectly sums up what a life in showbiz is all about.

There’s a whole treasure trove of trivia around Sinatra. Do you have a favourite item of miscellany about the man?

I love the fact he had an elaborate train set in his house, which he’d play with for hours on end. It must have appealed to the kid in him, which is a lovely counterpoint to the iconic reputation he had globally as a singing superstar and Oscar winning actor.

You can see Richard Shelton at Brasserie Zedel’s Crazy Coqs on 5 and 6 June.