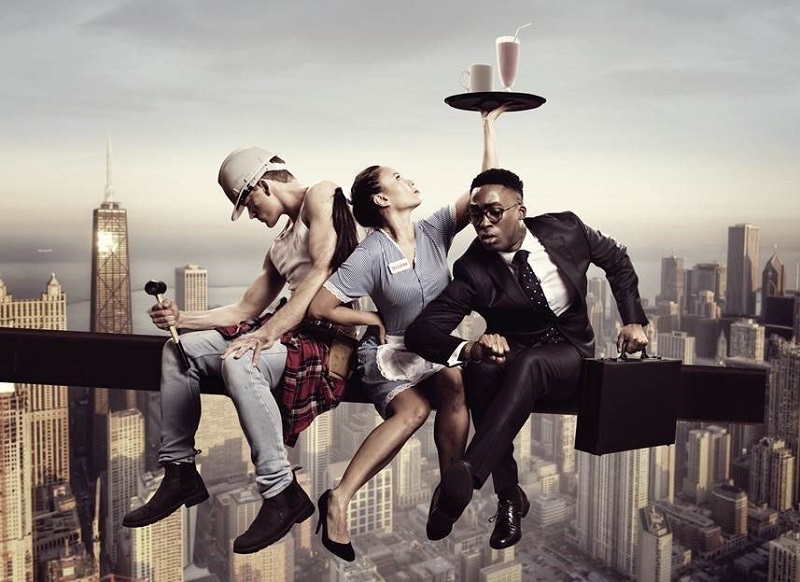 Working: The Musical charts the various ways we experience work and does so with great skill, authenticity and, surprisingly given its revue format, at times with real emotional punch.

Based on a book of interviews with working men and women in the early 1970s by US author Studs Terkel, Working: A Musical might have struggled to rise beyond its solid sociological origins. Brought to the stage by Stephen Schwartz of Wicked fame, we needn’t have worried. It opens in what looks like a mechanics yard and bunch of young people gathered around a TV watching an advert selling the joys of having a job. They dismiss its lofty voice-over with a shrug and kick-off the first rousing song and dance routine. The explosion of energy and tight choreography is repeated throughout and it’s thrilling to see this kind of slick, professional performance up close in the confines of the Southwark Playhouse.

It’s thrilling to see this kind of slick, professional performance up close.

Like a Bruce Springsteen song, the workers of Working are given a voice to sing about aspiration, of work’s dull repetition where, in the words of a builder, “you picks things up, you put things down,” and of their solace in dreams of a better life or staring bitter truths of unfulfilled lives in the eye. The list of professions reads like a nursery rhyme but without the candle-stick maker: cleaner, teacher, brick layer, stay-at-home mum, air hostess, truck driver, the offshore call centre operator, prostitute, wealthy student, even a press agent. With such huge changes to the world of work in the last 40 years, Working has stayed pretty up to date with new voices and songs based on interviews conducted by Schwartz in 2006-7. Even so, though Working is not dated, as the age of analogue gives way to the digital, it does evoke a time when modern social media giants like Facebook and Youtube were stepping into the mainstream.

Capitalism, the play seems to suggest, makes work central to people’s identity and, for the most part, these workers are stuck with it. Contrast the modern project manager who boasts that she has “no loyalty” to her company, to the old school factory worker who explains “I am want I do” and who sees no prospect of change. The latter view tends to prevail: a waitress is proud, singling “I’m a pro, a Michelangelo” while a brick layer phlegmatic in explaining that “stones are my business, stones my life.” Delivery, one of the new songs by Lin-Manuel Miranda (creator of Broadway smash hit Hamilton) featuring a fast-food worker, captures that pleasure of liberation from a workplace when he hops onto a bike to make his rounds, free to roam the city.

“History is made up of little people working to get a better life.”

However committed the authors of Working: The Musical might be to reflect authentic personal experience – and it does – these experiences are woven into a whole that gives a political shape to personal testimony. This might have led to something preachy, but avoids that pitfall by staying resolutely humane in its telling and thrilling in its shifts of tone, from Gillian Bevan’s despairing, yet witty teacher who tells us “I’m expected to change with the times but no-tells me how,” to Dean Chisnall’s cocksure rendition of the James Taylor song Brother Trucker. The Activist character perhaps comes closest to articulating the play’s message when he says “history is made up of little people working to get a better life.”

The final song Something To Point To gives us a further clue. If the work of most workers goes unrecognised, it is not because it is invisible – the results of work are all around us – it is because it is unnamed. The final uplifting song is matched by a steel girder – surely the emblem of the traditional working class – rising above the heads of the cast, a song that lifts us after a previous communal hymn of shared failure and the “I could have been someone” sentiment that haunts many of these worker’s testimonies.

The message of Working is important and, if it contains a fair amount of heartache, the gusto and slick professionalism sweetens the pill because in the end we care about these workers.