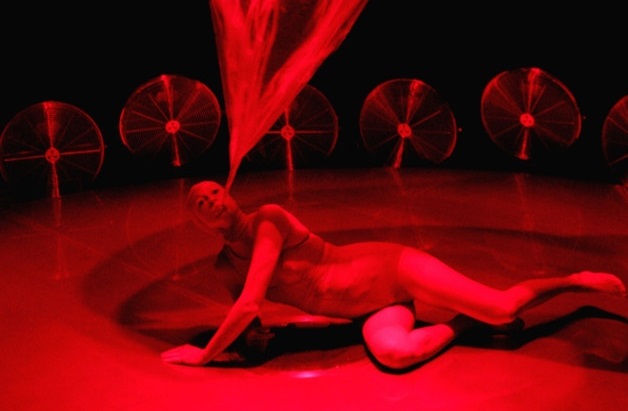 Appearing as part of this year’s London International Mime Festival, Phia Menard’s Vortex is an exquisite, perfectly formed bruise. Technically extraordinary, it dissects our human disguises with a devastatingly deft touch. A single genderless, faceless performer swaddled in layer upon layer of form-altering plastic, stands in a circle of electric fans. As Menard sheds her skins, husks or veneers the performance escalates, spiralling into rawer and more damaged regions of the soul.

A helix of twisted emotion forms around the body and self; the figure writhes to free herself of artificial yet organic looking identities and the process is somehow both liberating and suffocating to watch.  The next to naked human being that emerges by the end of the piece is a subject of both pride and shame – the strange, vulnerable, noble creature we call man.

Vortex is the companion piece to L’Apes-Midi d’un Foehn, a lighter more whimsical affair which has achieved something of a cultish repute; the latter beguiles and delights audiences using the same format of the unassuming office fan ring, giving life and gravity-defying grace to “the plastic bag ballet”. It is the kind of technical virtuosity and original craftsmanship that the mind simply baulks at. Compagnie Non Nova’s control is akin to wizardry – it’s not long before you quit puzzling over how the hell they are doing what they are doing and wholeheartedly slip into the dream. Or in Vortex’s case, the nightmare.

Menard sloughs one guise after another, dancing and jostling with former identities, as unfathomable quantities of plastic “self” are tossed up into the fans’ wind to form demonic clouds and an inescapable, umbilical-like whirlpool. At times she resembles an animal eating her own afterbirth, at others some shamanistic exorcist and the hellish final passage in which she frantically bites skin coloured granny tights from her almost-exposed flesh continues to haunt me.  Getting loose of our outer façade is, for the most part, portrayed as an intensely pained process. The trauma is punctuated in a few images that express the comically artificial nature of such plastic selves: the cringing sound of squeaking rubber, the instant familiarity of fumbling to remove your clothes on a drunken one night stand in awkward, ungainly gestures.

After the very final vestiges are gone we are plunged into darkness, accompanied by a heavy throbbing bass. When the lights come up the audience let out a shriek of suppressed terror. Perhaps we expected to encounter something horrific below the multitude of layers, but instead it is merely a defiant woman staring out at the audience. When she takes her final bow it is a bizarrely alien and unrecognizable act.  As though we’ve lost track of what it means to be naked and human in the confusion of all that air-born plastic.