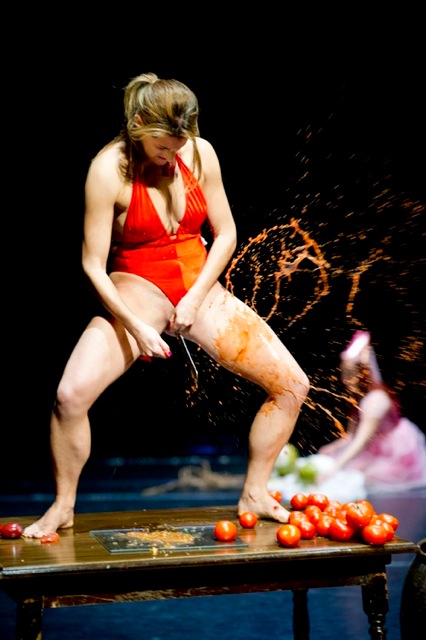 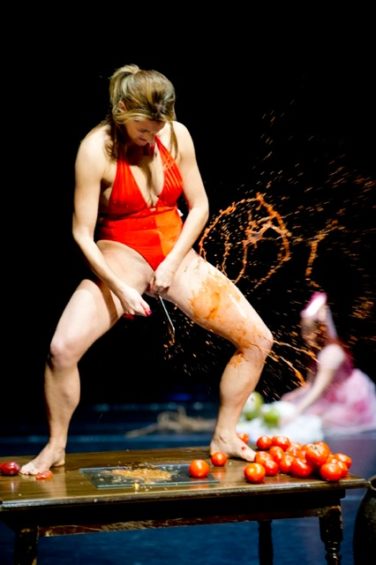 It’s not often you come out of a gig thinking “what just happened in there” but the overload of “The Famous” Lauren Barri Holstein’s cabaret circus, part of the Spill Festival at the Barbican, is designed to confuse and confront. Unable to analyse whilst it was happening, I took to merely noting down the events in the hope they’d make sense later.

We start with a watermelon wearing a blonde wig (almost everyone and everything in the act does) suspended above the vast stage on a wire. For a long time. Then it drops and smashes heralding a phase of broken and pulped fruits and vegetables as she next halves several pounds of tomatoes and tosses them in a cauldron. At the same time, one of her henchwomen with a sinuous body like Madonna and a string bikini is obliged to “rehearse” Barri Holstein’s death scene in a variety of acting styles including Rihanna choking while fellating Chris Brown, but liking it.

The puerile puree theme continues as our heroine mounts the tomato-cutting table and, with a bread knife clenched in her vagina, bursts a succession of testicular-shaped balloons full of red juice.

About this point the performance rang a bell and with a bit of help from Google it was easy to revisit the American feminist visual artist Carolee Schneeman whose Meat Joy covered the same messy ground in 1964.

There’s a Disney moment where Barri Holstein tells a sweet fairy tale, but the central character’s “Little Bitch” and the monsters are, predictably, vaginas with teeth.

In a rare moment of conventional entertainment, Barri Holstein sings, or possibly mimes, the Tori Amos ballad China, then betrays her formal Laban training with a naturalistic ballet before sharply mirroring it with an electro-convulsive piece jerking on trapeze wire to a Nicole Sherzinger track.

For A Whole New World from Aladdin she dons an animal head, scoots unsteadily about the stage on roller skates and urinates. She shoves tubes of bright red liquid inside herself and “ejaculates” masturbatorily over another female assistant. The female assistants spend a lot of time cleaning the stage with wads of paper towels, and the way Barri-Holstein commands them is just another fairly obvious part of her reclaimed-feminist schtick.

There are so many allusions: Yoko Ono, Tracey Emin, Amy Winehouse, Anish Kapoor but just when you’re beginning to think it’s so much self-indulgent and theatrically incoherent crap that even Lady Gaga would reject, she surprises you with a coup de théâtre of sudden and alarming beauty: a lazy singalong to a Leona Lewis number is emblazoned with a stage full of nude and semi-nude dancers writhing and posturing in a fantastic and thrillingly-choreographed display which culminates in elegantly-lit brave white streamers of toilet roll ejaculating over the supine star. It’s warm, and clever, and optimistic, and changes everything you’ve seen up till now.

It’s uncertain whether this will be the talking point at the Barbican’s next Arts Council funding review, or the evening people remember as “you had to be there”. But Barri Holstein is a force to be reckoned with, and a name to watch.