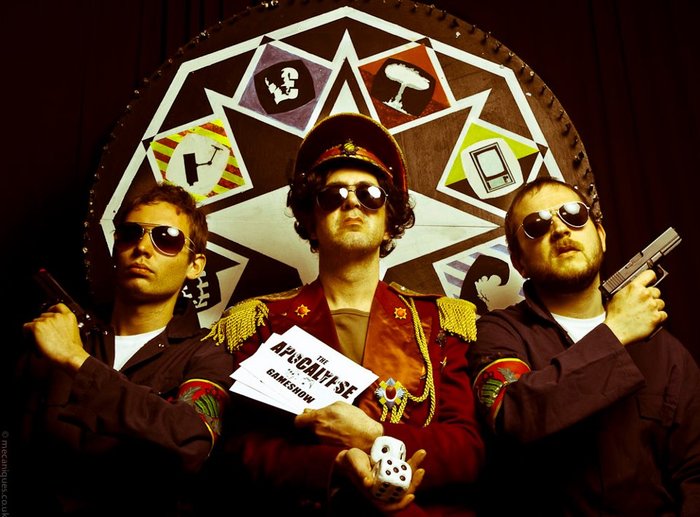 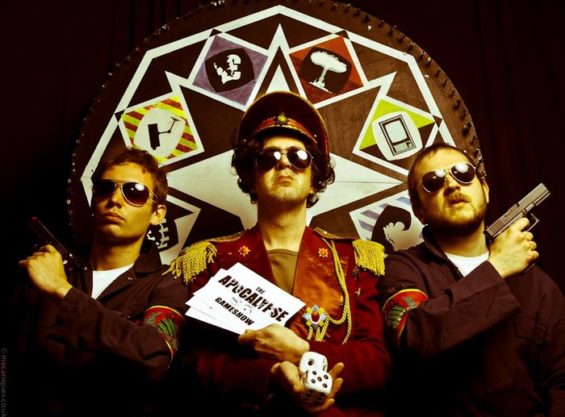 The Apocalypse Gameshow: a fun night of chaos and nihilistic pleasure?

When you were young, did you ever get duped into attending one of those after-school activities with circus skills and parachute games only to discover it was a secret Christian indoctrination programme? The BIGBIN club had a lot to answer for (it stands for Believe In God, Believe It Now – but how is a seven year old supposed to know that).

The Apocalypse Gameshow owes something to that heritage, but with left-wing conspiracy theorists instead of god-botherers. On paper it’s a fun, interactive romp through apocalyptic scenarios which audience members are asked to re-enact in an attempt to build the perfect end-times society. It’s beautifully set aboard the intimidatingly warlike ship, the MS Stubnitz. This floating arts-hub, probably the highlight of the evening, has been sailing the seas for 20 years and housed many intercultural performances, but is now moored in Canary Wharf, bastion of big business and “the man”.

As gamers arrive, they’re hassled by bouncers and put through their paces by a selection process to determine how likely they are to get involved with the show. It’s a reasonably entertaining, if horribly lengthy pre-amble (two hours) to the main event, but also means the same showy people get dragged up, rather than the oddly surprising hidden gem of an audience member you sometimes find at butt-clenchingly tense interactive cabaret.

Once a victim is selected, they are brought on stage and spin a wheel to determine which game will be played. The games included a guy pretending to sneeze over alien invaders, someone trying to unwrap a sellotaped bomb and a sort of blind-date style breeding program where the hapless selectees were made to gyrate for a few minutes. The performers didn’t really do much but the Winehouse-lookalikes amongst their number maintained their wobbly characters quite well.

The promise of a fun night of chaos and nihilistic pleasure is gradually steamrollered by the realisation that this whole night is a mask for preachy hippy-crap: corporations are bad, CCTV is bad, pollution is bad and so forth. Pseudo-facts are thrown around by the host in a bid to turn us all into revolutionaries, but the audience aren’t that stupid and soon lose interest.

If you’re fortunate enough to remember to bring cash, you can exchange it for their own currency, which you have to use to get much needed drinks. Except the exchange rate alters throughout the night to screw you over more and more – leading to a pricey interval. The message is obviously that banks are evil, but the effect is: “you’re all dicks, give me back my real money, we need booze because this show is so awful”.

As a gameshow, it lacks any element of skill. As a piece of cabaret, it lacks talent. As a sign that the end is near, after four hours of watching a man “host” a show by reading hyperbole off bits of paper, we couldn’t care less.