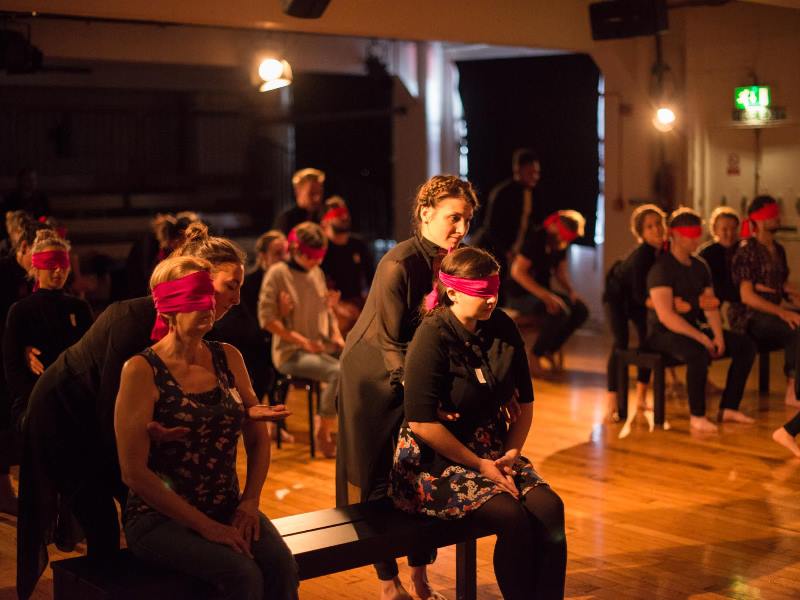 What does music taste like? What is its scent? How does it feel on your skin? With their new production Tapestries, BitterSuite seek to provide the answers and much more in a uniquely engaging and hugely uplifting performance, that will change the way you hear – and indeed touch, smell and taste – music ever again.

At the beginning of the performance each audience member meets their guide, who is there to help them throughout the experience. Then, they are blindfolded. From here, each guide helps their own member walk, bare footed, into the concert space, where a string quartet awaits. Just the short walk towards this beginning, blind as a bat, brings up questions of trust and feelings of vulnerability which are played upon, in a positive way, throughout the performance. The complete loss of sight is extremely effective in re-tuning the everyday order of the senses – particularly important for an art form for which so much of the experience is based around listening. When visual distractions are impossible, it’s amazing what you can hear. 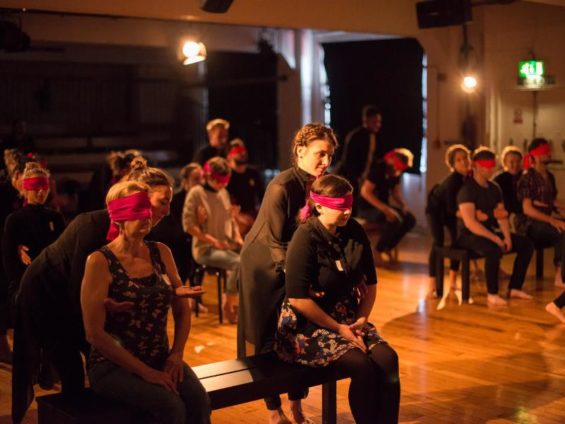 As the music begins so too is each audience member (for there are several within the space) submerged deeper into the music by their guides. It’s a very physical experience – audience members are tapped, pressed, massaged in rhythm or in feeling with the piece of music playing at that time, their arms raised and dropped, and at one point, their bodies actually lifted in the air. Never has the musical term “movement” been so apt.

But members are guided to feel the music, not just through their ears or touch, but through every sense. A tap to the chin by a disembodied hand means it’s time to open mouths and taste whatever secret treat is waiting for them.  At certain points a scent is sprayed and slowly fills the room. It’s a strange and disorientating musical isolation tank, which encourages a different and certainly more intimate approach to appreciating music than your average concert.

The music itself is a collaboration between composer Fred Thomas and poet Kayo Cingonyi, using compositions from composer Leos Janacek. It’s at intervals frantic and chilling – but there are moments of peace. One of the most soothing parts in the whole experience comes when hearing Cingonyi’s voice drifting in-between strings. In fact, as much as relying so heavily on a stranger can at first be disconcerting, the experience in itself becomes oddly therapeutic. Very few performances require the audience members to themselves give so much to the act, but in doing so there is an unspoken bond felt between everyone in the room, as everyone works together to bring this piece of music to life.

These moments are let down occasionally by the obscurity of what is needed by the guides. There are no words or verbal commands given – members simply have to follow their movements and guess whether their guides mean them to sit or stand up or walk about the room – which at times can distract from the music being played. Equally, the food surprises don’t work quite as well as other elements in translating across to the music and seem to exist purely to add another sensory dimension to proceedings.

Nevertheless with “Tapestries” BitterSuite has managed to put on a thoughtful and unusual way for audiences to get more out of their music. At the end, as the blindfolds are slipped off, it’s almost surprising to find ourselves in just an ordinary performing space. We’ve been immersed so deeply into another world that reality feels, tastes, smells and sounds a long way away.

Tapestries will be performed in New York in December and then from January onwards in the UK in 2017. Find out more at www.bittersuite.org.uk