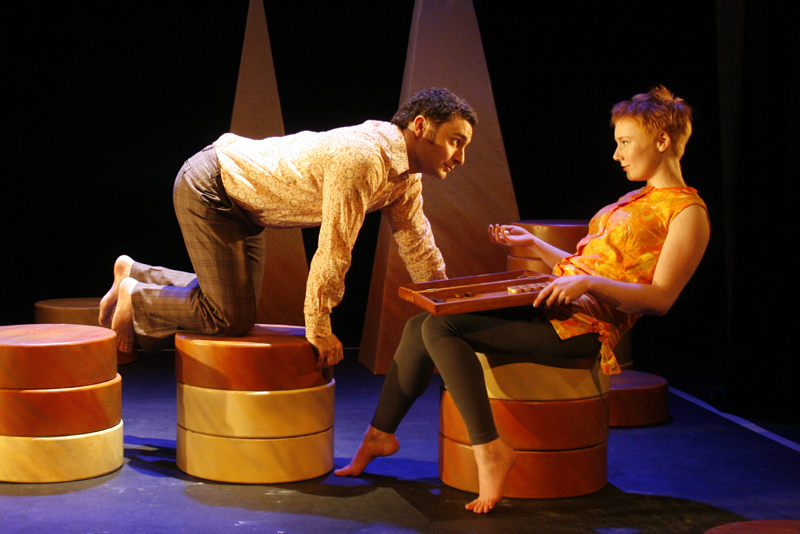 It would be simpler if it were just a foreign country. In Backgammon for Beginners, the past is a mythical land of legend, hearsay and conjecture. Taking inspiration from Iranian fairy tales, which traditionally state their unreliability in their very opening line, So and So Circus enact a poignant biographical investigation as fragmented as its canny hybrid language of acrobatics, dance, drama and storytelling.

Little is known about protagonist Roshan Rahnama other than his skill in backgammon and his migration to London in the 70s, before the Islamic Revolution that changed the face of Iran. Pieced together from contradictory information, the resulting story quickly becomes a collage of cramped bedsits, madcap visions and different generations of defiant tomboys (yes, Muslim countries also have those).

Playing with truth: So and So Circus dabble in a slippery past with Backgammon for Beginners

Performers Lauren Hendry and Kaveh Rahnama play different characters, interacting with stacks of giant backgammon checkers around the stage in a succession of athletic feats. Their inventive use of carpets, suitcases and other props evokes images like an elephant or a monster, all of which illustrate the text in visually striking sketches.

As the tentative facts of Roshan’s history fall down like dead leaves, the emotional truths of his life emerge through nimble choreographic depictions of vivid poetry. Gently he tries to push his inquisitive daughter away, but she keeps coming back, relentless like a spring toy, crawling literally all over him. Later, all the sorrow and frustration of his wife transpire in a formidably aggressive slap-and-stomp fight sequence. Filling in the gaps that surround their elusive target, So and So Circus’s intense brand of physical theatre speak much louder than words.

Equally evocative is the show’s soundtrack, performed live by Roshi Nasehi (of excellent electronic duo Roshi Featuring Pars Radio). In addition to contributing a few lines of dialogue, the composer sings in Farsi and plays keyboard, building textures through a loop pedal. The play’s musical accompaniment articulates the tensions of the slippery quest with subdued melancholy murmurs and danceable syncopated beats of inebriating beauty.

Some of the play’s key themes, like Roshan’s romances or even the role of backgammon in his life, vanish at times in the post-modern crossfire, but the picture painted keeps its potent colours. Assembling an arresting story with humour, candour and ravishing acrobatics, Backgammon for Beginners is never factual, but always truthful.