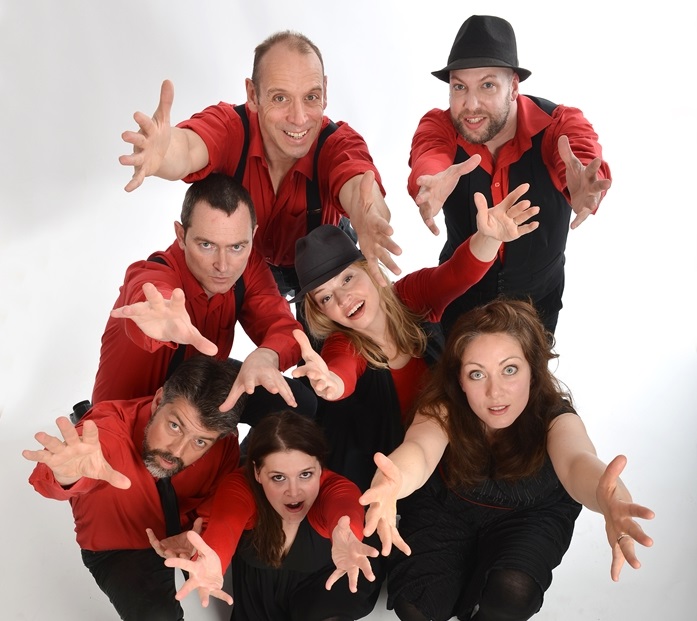 Anyone for virtuoso fast-paced improv with added jazz hands? 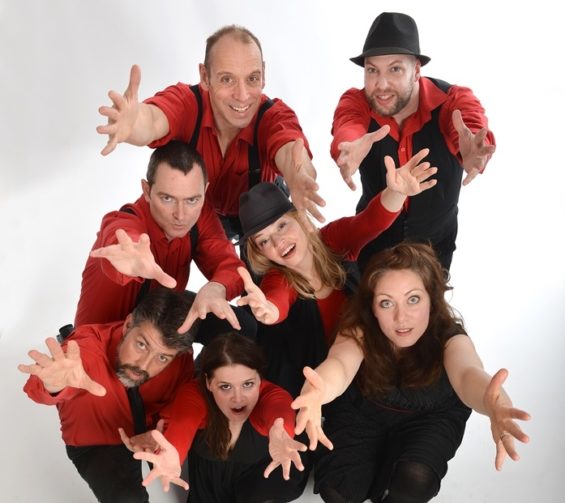 The Showstoppers return to the Leicester Square theatre tomorrow night.

The award-winning musical comedy improv troupe The Showstoppers are back in London at the Leicester Square Theatre for a short residency following their successful Edinburgh Fringe run and recent UK tour.

The show attracts a large crowd, including confirmed fans, West End Wendies and drama students, filling the main house for this late night one-hour show. The Showstoppers guarantee that everything they perform is improvised but, apparently, some people don’t believe them. Their website lists some of the funnier conspiracy theories and the show programme invites audiences to send in more. So, how do The Showstoppers put on a totally different improvised musical each night?

Host and one of the company’s producer-directors Dylan Emery mans the onstage telephone hotline to “a West End producer”.  With the help of shouted-out audience suggestions, he puts together a treatment for a new musical show. The audience then vote via a cheer-o-meter from the shortlist of suggestions to decide the show’s setting, musical styles and title. The assembled company of six actor-singers – part of a full squad of fourteen that reads like a “Who’s Who” of musical theatre – are then given the challenge of improvising an entire new show complete with song and dance production numbers. A highly accomplished trio of musicians, led by their musical director Duncan Walsh-Atkins, allows the performers to take flight confidently, supporting and driving the musical numbers. The band also get to showcase their talent, improvising a selection of clever pastiche songs in the random genres and styles suggested by the audience, ranging from experimental classical composer Stravinsky to 1940s Swing.

Tonight’s show, set in Swansea and entitled Swansea Lake, gives a great opportunity for comedy South Wales accents and character names (Dai, Cariad, Myvanwy etc). The actors are heavily relying on stereotypes of course, though this is switched around by having the main protagonists as a pair of female professional rugby players, brilliantly portrayed with huge physical commitment by Pippa Evans and Ruth Bratt. Evans instigates a sing-a-long consonant crunching chorus in fake Welsh, harmonised on the spot by the company, and Bratt’s ad-libbed monologue about the virtues of grapes (delivered at word perfect breakneck speed) is another highlight. Andrew Pugsley and producer-director Adam Meggido are hilarious as the identical twins swapping identities to woo Myvanwy, but it’s Justin Brett and Philip Pellew who steal the show throughout as the swans of Swansea Lake, never over-playing, yet prompting audience hysterics every time they cross the stage.

The structure of the improvised show is kept fresh by our host, who pauses, rewinds and prompts the action at intervals, sometimes asking for more audience input, other times setting new challenges for the performers to realise – and the company deliver every time. This is fast-paced, virtuoso improv from world-class performers and musicians. It is no wonder there are those who assume they must be cheating – the Showstoppers crew really are that good and present a fantastic opportunity for an audience to watch real talent in action, as well as being able to contribute to the entertainment.