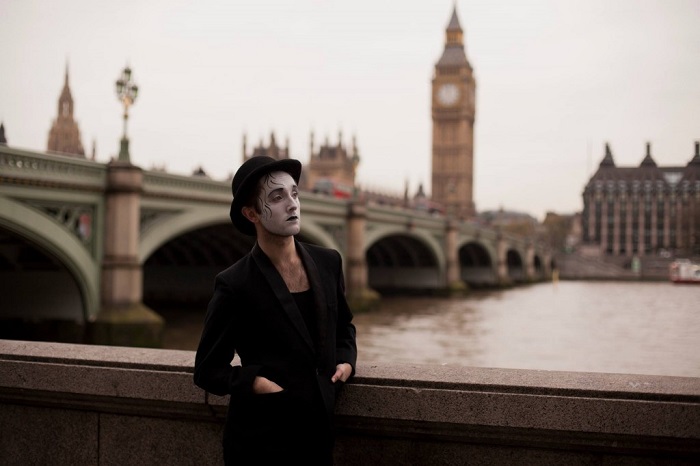 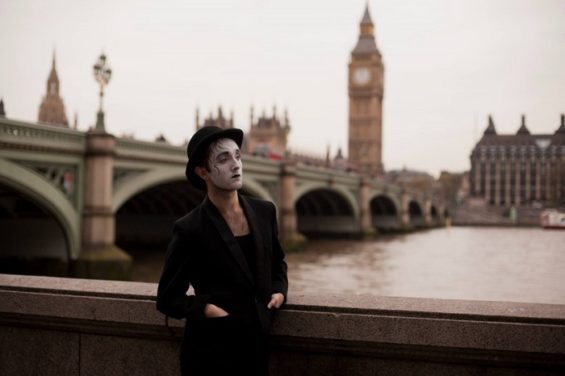 Pi The Mime was created especially for Mimetic Festival 2013. The following year, the character could be seen at the festival’s Pi’s Bar.

Un Cas De Nostalgie is a story about one mime’s affairs with his imagined friends, from fantasies he carries in a tiny suitcase.

Looking at Pi performing on stage it’s hard to imagine that the character was created only a year ago by actor Alexander Luttley. I was first introduced to Pi when when I saw his performance of 9 to Pi at Cabaret Roulette (a show held at the late Madame Jojo’s). His mime/boylesque routine had remarkable depth and told a beautiful story about breaking free from mundanity.

In Un Cas De Nostalgie we see Pi continuing to play with identities. The beauty of his show is that there is so much more than mime – puppetry, dance and burlesque intersect in the hour-long show embodied by different characters. Pi flirts with the roles with ease and charm, creating likeable characters including a commanding geisha and an alcoholic burlesque dancer. Having said that, the multitude of styles and personalities is at times achieved at the expense of the characters’ depth – some characters could do with a bit of polishing to steer away from stereotypes or cliches.

At the heart of the performance is one mime’s willingness to go all out to please the audience, even if that involves digging deep into his fantasies and nostalgia. The audience is taken on a moving journey through beautiful song choices and a good mix of humour and innocence. It’s a shame that the venue’s lack of sound insulation fragmented the delicate emotional journey with claps and cheers clearly heard from the adjacent room. Nonetheless Pi works hard to create connection between himself and the audience, for example when he gets them to hilariously participate in the geisha’s dance.

Un Cas De Nostalgie is remarkable in its ambition and ingenuity. It’s certainly refreshing to see a mime who does ballet and strips, but it is the look of innocence and vulnerability that lingers. It is difficult to forget those eyes that seem to say: what would you choose if you could be anyone you want to be?