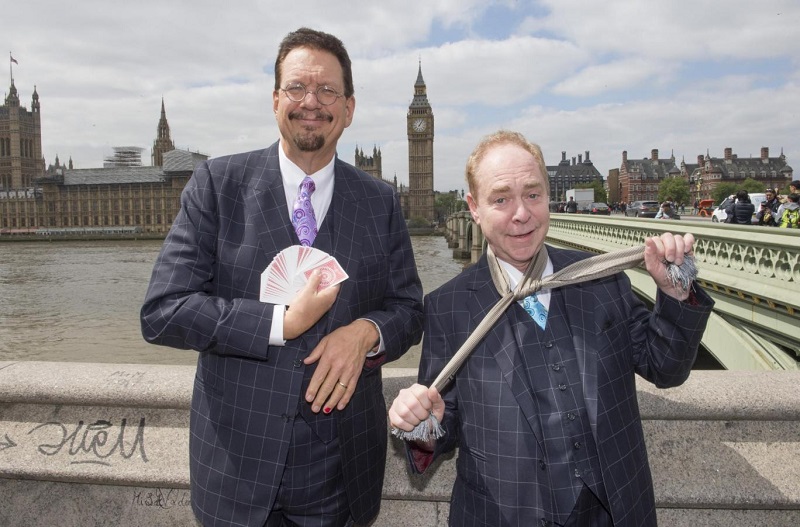 Talk about an appearing act: Penn & Teller return to the UK but is this their last visit?

Penn & Teller have become modern bywords for world-class magic and it is easy to see why. They have been working together since the 1970s and have scaled the heights of their art form. Few acts can claim to have had residencies on shows the size of Saturday Night Live or in places like Las Vegas, especially acts that don’t rely on big budget sorcery to make or keep their name.

In terms of physicality and personality, they could not be more different. The tall and avuncular Penn Jillette has lost seven stones in weight since their last UK appearance but he is still by far the larger of two both in terms of both size and presence compared to his (comparatively) minute and mute partner Teller. Jillette isn’t someone afraid to tell it as it is: in one sequence, he disses one of his industry’s grandest bodies, the Magic Circle. Then again, as someone who named his son Zolten and his daughter Moxie CrimeFighter, he is clearly a man running rather low on fucks.

That’s not to say Teller is in any way the lesser of the two. His classic Shadows routine may be one of his oldest tricks but it is still a stunning piece of magic. Watching him snip and prune away at a silhouette plant and seeing his actions happen to an actual plant behind him, it is easy to understand why three years ago he went to the courts to protect it.

Now legally known just by his birth surname, the man with the mononym has a beautifully expressive face; Teller’s casual grin as he feeds what appears to be a live rabbit into a grinder is something to behold. That’s not the only animal to get “maltreated”: in a twist on the old “sawing an assistant in half” trick, a snake is snipped in two before miraculously slithering away in one piece. Later, the tables are turned as Teller dices with a stage full of primed animal traps.

The pair have been working together for around 40 years and, while they aren’t afraid to repeat themselves, they are still finding new ways to amaze with illusions both large and small. A mind-reading trick is nothing novel nowadays when mentalists (not least Doug Segal, Peter Antoniou, Neil Henry and Ben Dali) are becoming more and more common but Penn and Teller find new and surprising ways to create a sense of intimacy and make it something unique to them.

Talking of intimacy, their crowning triumph here is their connection with the audience. That is not something particularly easy in a venue the size of the Eventim and their Las Vegas experience shines through in the way that, even in that cavern of a joint, they can make their close-up magic just as compelling as the larger stunts.

Given their ages (Penn is 62 and Teller turns 70 next February), there’s a question over just how many more times the duo will appear on this side of the pond. If these Las Vegas magicians have cast a spell on you, go grab tickets before they disappear.

Penn & Teller will be at Eventim Apollo until Sunday 25 June.