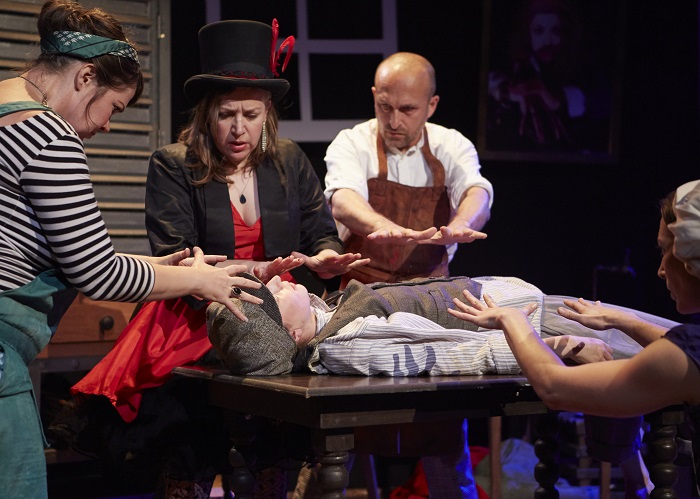 Five years since we last saw them, the Night Kitchen Cabaret crew are back with Family Tree (appearing at RADA until 2 July). This latest episode is called Family Tree and is like the best kind of school reunion: it has all the people you know and love without the usual divorce stories and baby photos.

This time around, there’s trouble afoot, ahead and above. Ruby Kitchen (Roses Urquhart) is planning a cabaret show but is a couple of acts short while her scientist colleague Mabel Trinkett (Jo Bowis) is searching for love when she’s not perfecting the ultimate cabaret lubricant (that’s gin to you).

Ruby’s orphan protegee The Boy Bun (Jordon Stevens) is living in mortal fear of a 7-foot tall demon and Sapphire Cuisine (Clare Barrett) is becoming more and more jealous of Mabel’s culinary prowess. Cousin Moldavite (Sophie Page Hall) is out there amongst the stars and running late her once-per-decade visit. And that’s just for starters.

As might be guessed from its famous surroundings, this show is more theatre than cabaret but you could be forgiven for thinking otherwise. As well as drama, there is puppet storytelling, Bowis and Simon Frankish’s musical contributions, juggling care of Night Kitchen Cabaret alumnus Mat Ricardo and aerial circus from Page Hall. There’s no audience participation but Urquhart frequently breaks the fourth wall with her monologues and, as Circularity Thinking’s Shona and Margaret, she and Page Hall even get to put on a spot of hula hooping. Beckett this isn’t.

With all those plotlines, it would be easy to lose sight of the characters but the script allows each to flourish and grow before our eyes. Each one gets their turn in the spotlight, allowing the cast to grow together during the 80-minute runtime.

As both Ruby the “mistress of the revels” and Family Tree’s writer and director, Urquhart does a beautiful job of keeping the various strands separate but involving.  She recycles old Night Kitchen routines and gives them fresh life in this new setting, as well adding in plenty of cheeky wit in line with her past productions.

If theatre is going to rise above the current spate of re-re-revivals that plague stages up and down the country – especially in this anniversary year when every thesp and their understudy is Shakespearing like they’ve never Shakespeared before – this is the kind of production which should be put on a pedestal and admired. Family Tree is not perfect but there is much here which reaches hearts and minds in ways most modern theatre simply doesn’t.