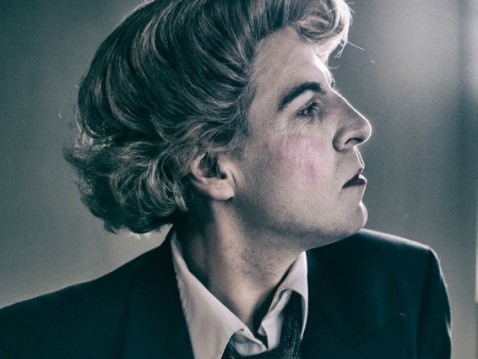 I met Quentin Crisp on his first book tour after John Hurt’s daring portrayal in the 1975 TV movie The Naked Civil Servant turned him into an overnight celebrity at the tender age of 66. What struck me was that off-stage he was gentle and charming and calm, but on-stage he was caustic, and arch, and dangerous and that both aspects came quite naturally to him.

Apart from the whiff of mothball that Quentin’s Oxfam-donated clothing exuded up close, Mark Farrelly successfully captures the essence of both the warrior and the wounded sides of Crisp.

Having said that, the material is an easy cut-and-paste from both the TV movie and the script of Crisp’s own How To Have A Lifestyle one-man show and stays comfortably close to the familiar quotations – “dust never gets deeper after four years”, “I am one of the Stately Homos of England” and “never keep up with the Joneses, drag them down to your level, it’s cheaper”.

There’s a touching sequence where Crisp reminisces about his search for romance in the form of the “great dark man” and Farrelly’s interpretation suggests his romantic homosexual longing to be perhaps more genuine than his professed distaste for sex as “the last refuge of the miserable”.

The quips land squarely and work particularly well for audiences completely unfamiliar with the character, but there’s none of the jeopardy you felt in a real audience with the fearless old rogue and the production needs sharper direction than Linda Marlowe’s affectionate touch. The darker side to Crisp’s opinions and personality is rarely explored and could make for a much edgier cabaret evening particularly if he manages audience reaction and participation by improvising more waspishly as Quentin.

With the perspective of hindsight, and because Farrelly’s likeability could carry it, it would be good now to extend the piece with Crisp’s opinion on Princess Diana – “I always thought she was such trash and got what she deserved” – or his unexpected affection for Margaret Thatcher revealed in his 1993 Alternative Queen’s Christmas Message on Channel 4.

Crisp’s languorous drawl is hard to emulate without putting the audience to sleep – there’s a recording of his American stage show where he talks about the divorce potential in a couple when one partner continually places “a cake of soap” on the wrong side of the basin, in which he manages to give “soap” three separate vowels. Farrelly wisely compacts this while retaining the timbre of both the younger and the very much more infirm man: Quentin continued performing until almost his 91st birthday.

It’s worth pointing out that while this could be seen as a fairly soft option for an elderly actor coasting through his near-retirement, Farrelly is a robust and handsome thirty-something seen recently in the excellent Whose Afraid of Virginia Woolf transfer to Trafalgar Studios with Matthew Kelly, and his transformation into the frail old waif is all the more remarkable.