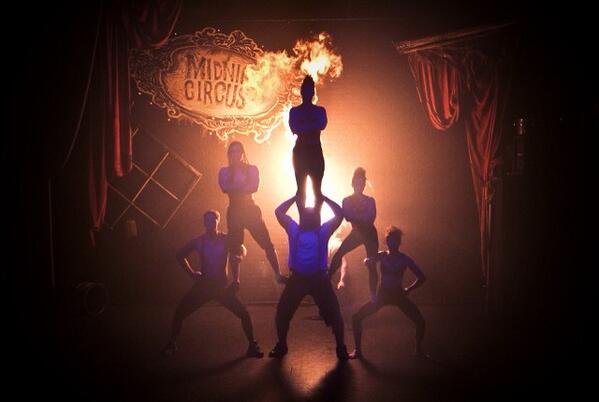 AirCraft Circus are back with a newly incarnated Midnight Circus, transforming the usual theatre space of Jacksons Lane into an underground glam-rock night spot where sparks and performers fly. 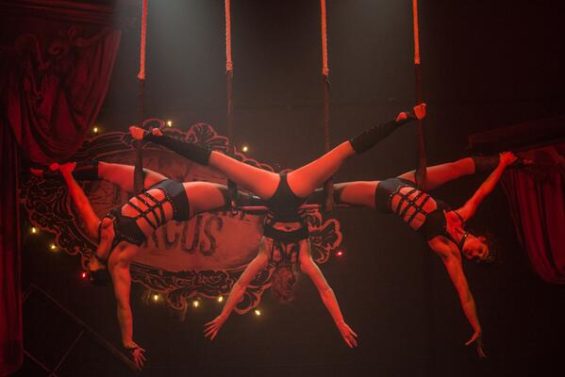 In a move away from the industrial spaces of their Hangar Arts Trust warehouse home, and warship MS Stubnitz where last year’s production appeared, the AirCraft Circus have bought a little of their hard edges and bare steel to North London’s top circus production house. The usual raked seating has been removed for naked boards and rostra, and we are separated from the performance areas by only thin lines of hazard tape. An invitation to move around the intimate space gives a feeling of freedom, although the whole show can be appreciated from any view-point and there is little inclination towards movement once we settle into our initial places. With a turn of the head we can take in the leopard-skin and lace of Hannah Tomkins crawling over our heads in a raised cargo net, Alex Frith appearing from behind with an oversized zippo lighter, or Adrian Martel swirling above the main stage in a red aerial net. Artistic Director Frith opens the show to the pulsing strains of Nirvana’s Smells Like Teen Spirit, strutting and posturing in his business suit and trainers in a way that suggests a Prospero-like newcomer discovering his mastery of these new surroundings. 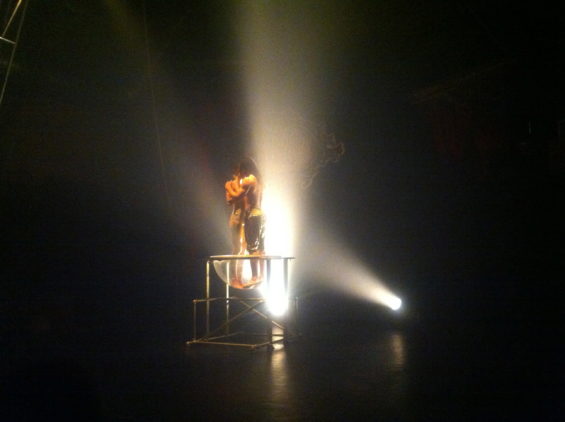 Charlie Hain‘s excellent lighting design provides both magic and rock-club grit and, combined with Dave Kemp‘s live sound from the overhead band-stage, immerses us fully as voyeurs in the intense Midnight Circus world. Frith serves as our connection point to the other performers, who execute their acts as though no-one is watching, as if this spectacle is no more than a part of their odd nightly routine that we have stumbled upon together. Katy Coleman, Moira’s Campbell and Tomkins appear on three cordes lisse, and the moments when they manage to synchronise give a powerful image. Many of the artists tonight are performing at the edge of their ability, which lends an added tension as we watch their wobbles, strains and almost-slips up close. It’s not always comfortable, but that is fitting with the dark and dangerous atmosphere Midnight Circus cultivates. The sensual double silks routine from Kat Lilwall and Matt Hurry is the closest any of the numbers come to providing a storyline, as their passionate holds and bold disrobing suggest a tender one-night stand. The pedestrian modern dress and blue silks seems incongruous against the general Moulin Rouge-pirate aesthetic, but the technique is strong. A brief pole number from Lucy Francis-Litton – (co-director and choreographer) is full of attitude, and leads into Cornelius Atkinson‘s superb aerial straps. He spins out above the audience’s heads in pointy-toed feral beauty, and his nodded communications with the pulley operator – half-hidden in the shadows – keep us grounded in the realities and risks of the company’s work. Jonny Grimwade manipulates living fireworks in a twist on traditional fire sticks; the electro-bass of Kemp’s Eigenharp vibrates through the floor and walls; and the short 35 minute first half ends with an ensemble acrobalance routine. There’s something deliciously surreal about these teetering night creatures performing synchronised choreography. 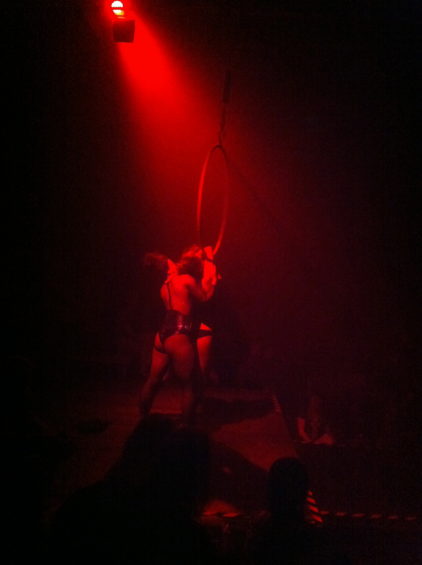 25 minutes later we return to the thrilling fumes of petrol permeating the hazy theatre, and are treated to a homoerotic aerial hoop duo from Teresa Callan and Francis-Litton, dropping BDSM hints with their intriguing mirror choreography and shining leather-strapped costumes. Callan appears again later with some striking LED hula hoops and, as I stand and move to take a picture (we are all encouraged at the start of the show to take non-flash photos and share them through social media), I notice that it feels good to be on my feet, more a part of the vibe. Aerosmith’s Nine Lives accompanies a doubles trapeze number from Campbell and Coleman; Atkinson and Lilwall present an acro routine in and around a large Perspex bowl (that, sadly, has little function other than set dressing); a strangely superfluous blackout leads into triple trapeze from Callan, Francis-Litton, and Tomkins, showing victorious smiles and physical effort to Marilyn Manson’s iconic Sweet Dreams. The flame filled finale of angle grinding and fire-toys is a rousing end that leaves me excited for more. It strikes me that this is a socialist kind of circus; the performers seem less interested in showing off personal prowess than in creating an atmospheric experience for their audience. And it’s an experience unlike any thing else I’ve encountered.