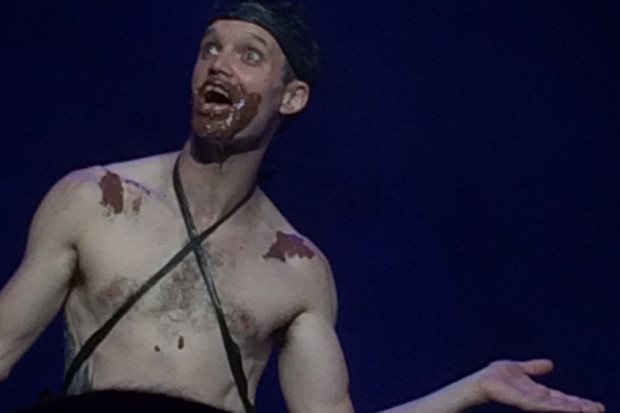 I realised I must have officially become a fangirl when I found myself inadvertently joining in with Famous Seamus and SeanTastic‘s arm-flinging, hip-grinding introductory catchphrase: ‘Lords – Of -Strut! (Mmmmmmm)’. I don’t often find myself with favourites, but this show at Edinburgh Fringe marks the 4th time I’ve seen the lads perform – which is only once less than I’ve seen the beguiling Camille O’Sullivan, so they must have something pretty special – and not once have I failed to laugh so hard I cry.

A bit of backstory here. Seamus (Cormac Mohally) was a child star, whose dancing made the world have emotions. His younger brother, Sean (Cian Kinsella), dances too, though usually bullied into a supporting role to allow Seamus’ star to shoine. (I’ll keep the typo. It fits the show).

Through character clowning, with the occasional wee bit of circus technique thrown in, the pair drag us into their own personal, hilarious hell, desperately trying to maintain a perfect showbiz front at all times.

The Lords Of Strut began as a street show, and the universal appeal and boundless energy needed for pavement success is also visible across their entertainment empire of online videos, theatre performances and now, ladies and gentleman, their own late night TV talk show, as they continue in their mission to Change the World Through the Power of Dance. Of all their shows, this is the least suitable for a family audience, mind. Unless you want your nippers to see a member of the public fisting the boys’ ma (played by Sean in a full-on lady suit) to try and retrieve her bottle of vodka.

We also see special guests Michael Flatley, Father Billy Nomates, and a rock. Plus the surprise appearance of a fetching bin-bag mankini costume for Seamus. An infomercial does NOT feature ironic juggling (‘There’s no such thing SEAN’); fragments of acro-movement in their choreography look even more precarious than usual in the tiny black box space; there’s some lip-synching to power anthems and we, as the studio audience, get to clap and cheer our way through the beautifully bonkers hour.

Having followed the brothers’ previous work, it’s also fun to see Sean standing up for himself for a change. He’s determined to bring politics into this talk show, and that’s what he does. The connection between terrorism and cats has never been clearer.

The Edinburgh Fringe run is now over, but Seamus and Sean are appearing at Dublin Fringe next month, and regularly tour. Worth tracking down if you notice them around, the Lords of Strut well deserve the celebrity they think they already have.