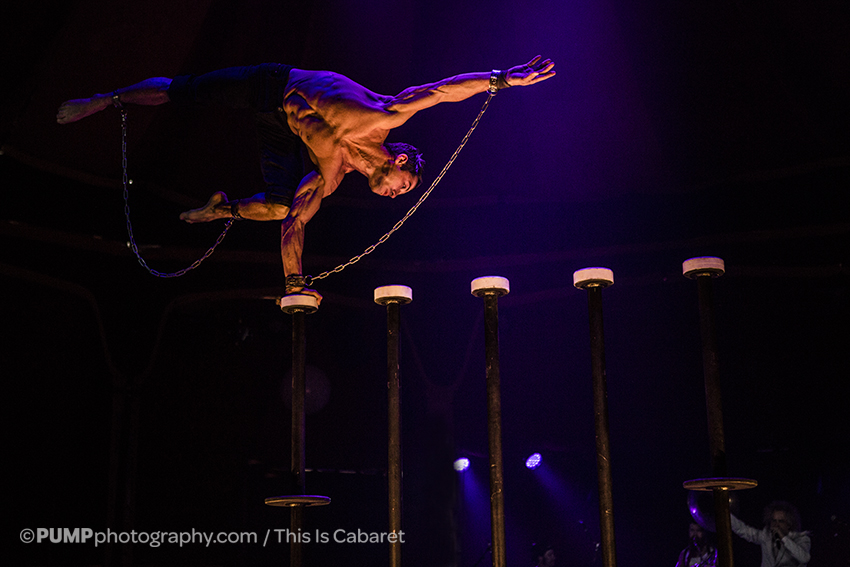 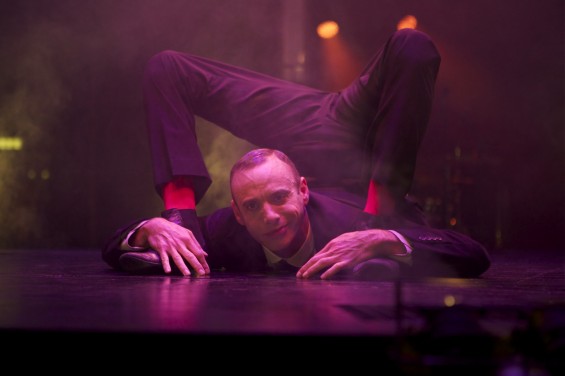 After a successful run in last year, Limbo is set to be the biggest circus show in town this summer again. It was designed specifically for a 1920s-style Spiegeltent so it’s a good job that they’re appearing in one at the South Bank’s London Wonderground. It’s hard not to feel awed walking into such a spectacular venue before the action’s even begun, so we’re off to a good start.

Jonathan Nosan opens the show with a contortion act. It’s impressive, although a little too long, so it’s lucky that Hilton Denis is next in line with some enthusiastic tap dancing to keep our energy levels up. It’s a great routine: polished and joyful with a bit of audience participation, which we jump into willingly thanks to Denis’s warmth and incredibly expressive face. This isn’t the time or place for jazz hands, but I bet he’s got great ones.

Bandleader Sxip Shirey‘s music is a feature piece of the show as much as the circus routines and its constant presence on stage, with its rotating line-up of musicians as different cast members pick up a wide variety of instruments, ensures the pace never slows even during scene changes. Kind of funky, kind of drum and bass, the band could carry a show on their own – I mean you can’t get bored when there’s a guy just over there playing some marbles in a bowl, right? Working the score into the show really drives home the message that you are watching a company rather than a line-up of solo artists – it makes a cohesive piece of the show, and much more effectively than the recurring trope of feathers that we see throughout the evening, although this gimmick pays off for Mikael Bres, whose feather deployment adds a lovely touch to his Chinese pole routine.

It’s a shame that the two women of the troupe don’t get to feature more, and in a more imaginative way. True, they have their moments to shine – Heather Holliday‘s lightsabre-esque sword swallowing was a highlight, drawing gasps of appreciation from the audience – but it often felt like they were there to support the men; in one act, quite literally. Much of Holliday and aerialist Evelyne Allard‘s stage time sees them playing the glamorous assistant role, selling their sexiness, which is fine, but it’s also done, and sort of pointless. These women are physically fit and highly-skilled – they’re never going to not be sexy.

Limbo is a dynamic, atmospheric and enjoyable show with some incredible stand-out performances, not least Danik Abishev‘s hand-balancing, executed wearing chains and assisted by some excellent lighting to give the illusion of a jail cell, or the group routine involving tall, bendy poles with cast members swaying above the audience. I don’t even know what it’s called, but I want a go.

For the latest on what’s going on in the Spiegeltent, read our Ultimate Guide to The London Wonderground 2014.

Cover image: PUMP Photography, exclusively for This Is Cabaret

Article image: Lisa Thomson, exclusively for This Is Cabaret