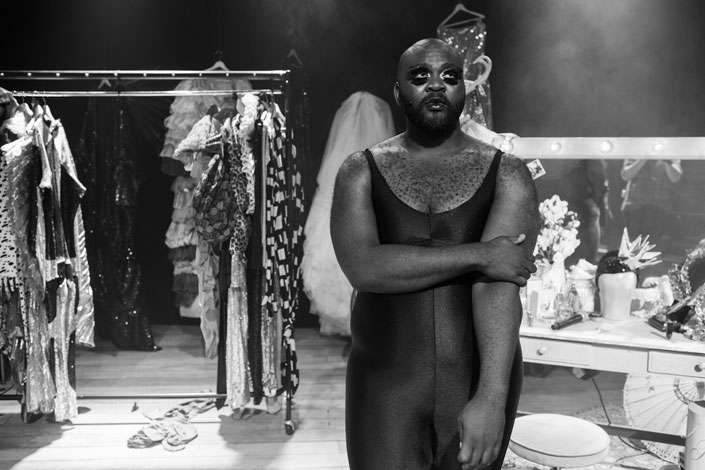 The Purcell Room, the Queen Elizabeth Hall’s recital space at the Southbank, is for classical singers a landmark venue, having been the stage for many a distinguished artist’s debut. As part of the Southbank’s Queering Voices festival, the Purcell Room presents a recital from Le Gateau Chocolat, the Nigerian-born baritone with benefits – sparkly false eyelashes and voluminous ball dresses along with the de rigeur lycra onesie.

Accompanied by his “Coco Orchestra” playing the Purcell Room’s stunning Steinway piano with cello and woodwind soloists, the Rubinesque singer makes a diva’s entrance, resplendent in a ruffled black taffeta gown and long wig. His opening aria, Wagner’s Dich, teure Halle from the opera Tannhäuser, is a joyful greeting to a beloved hall, originally written for a female character to sing as part of a contest is to be held in the hall. Le Gateau Chocolat’s impassioned interpretation of the aria serves as a fitting introduction to tonight’s theme – the different meanings of the word “drag”, both semantically and as a living, breathing concept.

Listening to him are a mixed audience of gay couples, glamorous women in groups, elderly ladies and a handful of drag queens have squeezed into the hall for a hot and sticky hour with Le Gateau Chocolat, on one of the hottest days of the year. This sweet treat of an act follows up the Wagner with a riotous medley of Pure Imagination (Willy Wonka) and Chocolate Salty Balls (South Park), a combination we would guess has not been seen too often in the Purcell Room.

Throughout the performance, Le Gateau Chocolat finds time for several changes of frock during his renditions from his varied and very personal repertoire. Between songs, he tells stories of his early life in Nigeria, growing up and realizing he was gay in a country where it is a punishable criminal offence. The poignancy of his version of Radiohead’s Creep, with the opening sung to a sparse accompaniment with plucked cello strings, has a deeply personal resonance for him. This is emphasised when he later reveals that he feels unable to tell his own mother about tonight’s Purcell Room debut. In fact, because of the draconian Nigerian laws on same sex marriage, cross-dressing and gay sex, she knows nothing about her son’s stage career.

Wearing his heart on his flouncy sleeve, the flamboyant singer performs a sublime rendition of Ol’ Man River from Showboat. He amusingly points out the cliché that the song has become for many black male singing actors; regardless, it is a lovely showcase for his rich voice, showing here its basso undertones.

The pace of the concert does stagnate a little during a series of several slow ballads. Having said that, Make Our Garden Grow from Bernstein’s Candide is an excellent choice with its poignant lyrics about conventionality – “we’ll get married, we’ll build a house”, tinged with sadness in this interpretation, and significantly, Le Gateau Chocolat sings it after removing his make-up, lashes and wig, dressed in a man’s suit.

Some of the musical interludes during costume changes are a little schmaltzy, with a Disney-style West Side Story instrumental medley that we could see Bernstein himself cringing over. A short snippet of South Pacific’s Some Enchanted Evening is just glorious though; Rodgers & Hammerstein could only have dreamed of a voice like this singing their song when they first wrote it, and the audience shout for more.

Top marks to the Southbank Centre for their innovative and pioneering Queering Voices season, though it is rather bad form that they couldn’t find room to name all of the shows musicians on the A4 handout that constituted a programme.

Le Gateau Chocolat’s In Drag is truly a unique, enriching and moving experience. If you haven’t had a taste of this chocolate dessert yet, it’s time to indulge.