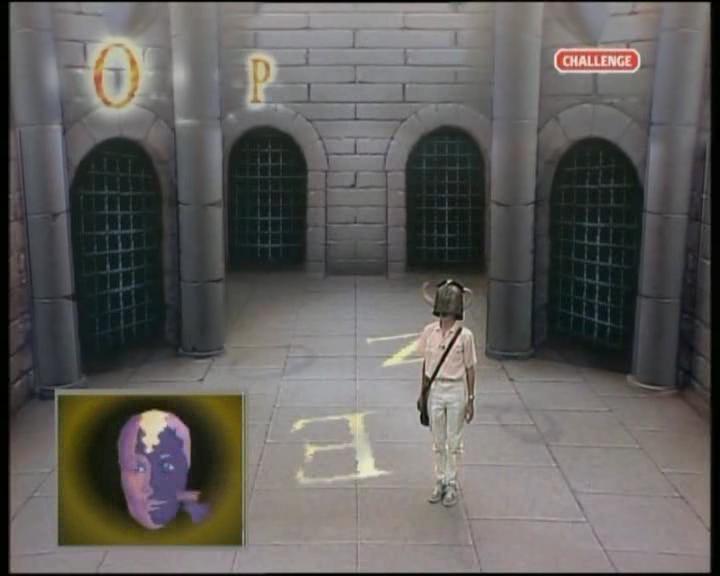 Just like the iconic kids’ TV challenge show from the 90’s that lends this event its name, ‘Knightmare Live‘ is an entertaining quest in the company of Treguard, fantasy characters, an evil-but-comfortably-safe-really villain, and some goblins. Unlike the original, the brave challengers who volunteer to don the horned helmet are guided through the adventure by special guest comedians seated around an onstage mic. The frisson of excitement and investment in the quest are still tangible – although, like when watching as a child, that investment can sometimes be in the desire to see things go wrong.

Our guides today are from the legendary Australian comedy band Axis of Awesome and if, like them, you have never heard of the original gameshow before, here’s what to expect. A series of audience members are invited onstage to wear the famous helmet that renders them sightless, then they are directed through a series of challenges to move through rooms in a dungeon and complete a quest that is announced beforehand. There is a high amount of comedy, which comes from the spontaneous audience interactions, improvisation among the regular cast of performers, and the attempts to collectively achieve a ridiculously wonderful goal.

As a child, I remember feeling physical sensations of clenched fists and leaping stomach as I watched my young counterparts on the telly try to escape their doom. The stakes in the Live show are not so high, and this is a clever move. Because, watch the tv version back now, and you’ll notice the low budget props and costumes, the dated CGI graphics, the adult generosity and tongue-in-cheek recognition that this, really, is all rather silly but jolly good fun. And that is exactly what they give us here.

Yet, if you’re lucky enough to be selected as a challenger as I am, that electric physical nervousness will hit again as you try to follow directions in the dark and avoid decapitation, complete puzzles, or win allies. Under that helmet, my face is fixed in a delighted grin throughout, wrapped up in the euphoria of fulfilling a deeply held childhood dream.

And so, knowing how desperately I yearned to play the game as a kid, my heart goes out to all those raising their hands in the audience who never get a chance to walk the dungeon themselves. My begging email in advance paid off this time but, had I gone along on the off-chance, I may have been disappointed again. Not that the rest of the show wasn’t thoroughly entertaining in its own right (and Paul Flannery captures the spirit of Hugo Myatt‘s original Treguard perfectly) but, be aware, we can’t all be the chosen one, so check out their website to apply in advance if getting inside the hat is a make or break issue for you.

My schedule won’t allow me to sit inside the Pleasance every night this month to watch the whole series, with its constantly changing guest guides and revolving roles among the cast. But if I could bundle them all into a live boxset and take them home with me to show my friends, I definitely would. Word is that the show will return again to London, and my eyes will be peeled for when tickets go on sale.