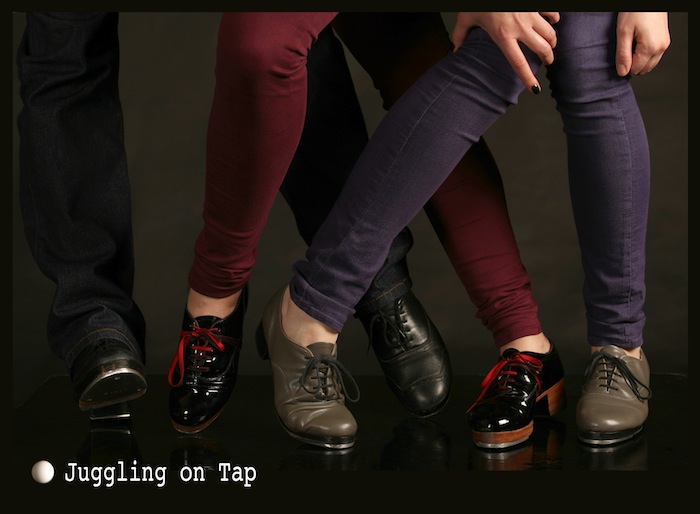 Juggling On Tap rock the Rosemary Branch Theatre, as this five piece cast put on a five star show. 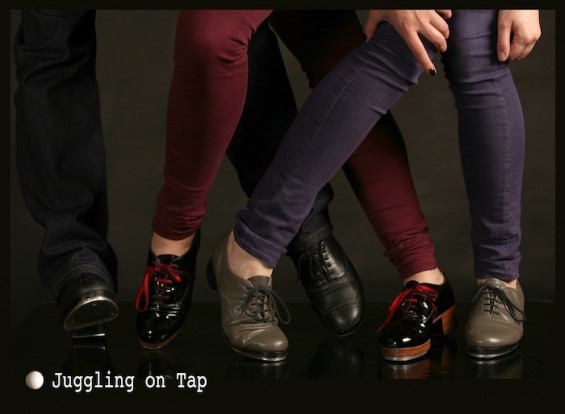 The quaint but bustling Rosemary Branch Theatre plays host to a new production devised by Juggling On Tap. The show comes with the support from Circus Space’s Lab Time, the training academy’s programme for new graduates of all disciplines. Music from around the world flavours a show which couples impressive tap dancing with creative juggling routines for a jam packed display.

The cast of five push the boat out and exploit a variety of talents to make this newly-devised show a mix of tunes, comedy and skill.  There is apparently no end to Magnus Mehta‘s percussive talents which see him moving swiftly from instrument to instrument and throwing around crossed and complicated rhythms. Avalon Rathgeb steps up to the plate by mimicking the rhythms in tap, and launching into a range of complex footwork with effortless ease while Eimear McGeown brings an Irish flavour to the show with her Irish dance and range of flutes. McGeown also demonstrates her talents as a composer in a segment entitled The Island (Inis). Her performance is relaxed and has a natural flow that quietens the mood. With further harmonic hints at world music her work ties in brilliantly with the show’s ambience.

Marie Gabrielle Marty shows all round skill, contributing tap, soulful vocals and guitar to the show. When the juggling finally makes it’s way into the show, Stewart Pemberton delivers a knockout set of mesmerising tricks and combinations, constantly changing and evolving. The juggling aspect enters a little late considering its implied prominence in the production’s title.

However, once it arrives, the whole cast pull out all the stops and work together to create a funny, eye-catching display of concentration and imagination. With balls flying here, there and everywhere, and some being bounced for percussive sound purposes, the skill and rhythm become part of the music. With the addition of dance beats, it all combines to form a wall of intricate rhythms.

The show, still in its infancy, is not without its teething problems. The show deserves more space than the venue allows, as individuals squeeze and tiptoe around the tiny stage. A few segments are drawn out slightly too long, such as the imitation section that sees Mehta and Rathgeb in a call and response style jam. Nevertheless, the buildup in tension in each element of the show is commendable and each chunk of material builds to include most of the cast. This is particularly impressive when four of the cast members tap in unison while Mehta accompanies on percussion.

Under Peta Lily’s able direction, this collaboration of individuals has produced an exciting and stimulating show.With a name like Juggling On Tap, it feels like the juggling aspect arrives a little late to the party but, overall, there are some wonderful moments and this brand new show is sure to develop and grow.