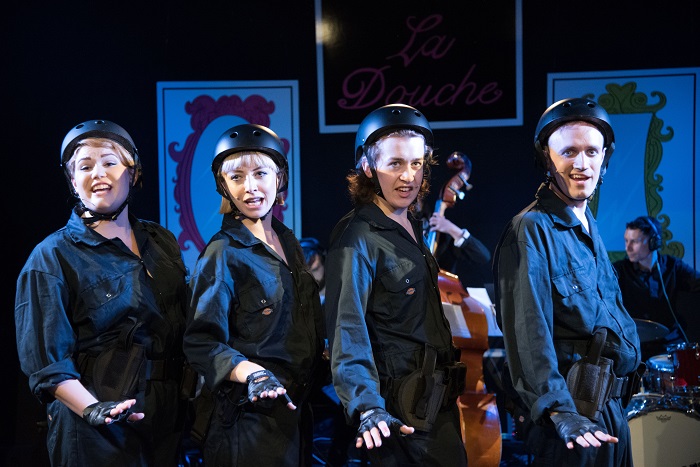 Seven years in the making, self-billed “drag action musical” Heels of Glory arrives for a three week run at Chelsea Theatre as one of the headliners of this year’s London Pride Festival.

Heels of Glory follows the story of Honey (Matthew Floyd Jones), a young drag queen and her Bond-obsessed best friend Jay (Susan Harrison) as they sneak into drag club La Douche to see legendary drag queen Splendorella (Topsie Redfern). Amidst the chaos they uncover the evil plan of villain Allura Supreme (Sarah-Louise Young), and the pair become all that stands between her and the fate of all drag queens in the world…

The drag musical offers a screwball rendition of action movies we know all too well – there is a villain, the underdog hero, the sidekick and of course chase and fight scenes – except that the hero is now a closeted drag queen on her first night out and all the other characters are queer as folk. 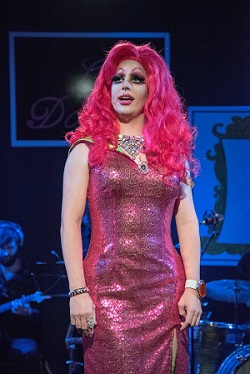 Do not go in expecting a glitzy, self-important West End musical – with a cast and creative team made up of seasoned cabaret artists, the show does not take itself too seriously. The set is made up of comic book inspired print outs from the chandelier in the ceiling to the rotary dial telephone on the wall while the plot is dotted with farcical but hilarious dei ex machina: the chase scene between Allura’s henchmen and Honey is interrupted by “union rules” – just as the henchmen are about to apprehend our hero, their shift is over and they are off to grab an interval drink.

The show is an unapologetic celebration of everything we love about LGBTQ+ culture, featuring RuPaul’s Drag Race references, sing-alongs, and in the great tradition of Paris is Burning, a reading session thrown in for good measure. In a way Heels of Glory is an extended cabaret show featuring some of the UK’s finest drag/cabaret talent. Topsie Redfern, Drag Idol UK 2013 runner-up and Best Drag Newcomer of Boyz Scene Awards 2014, blows the audience away with her vocal finesse and inimitable stage presence.

Young, member of Olivier award-winning The Showstoppers, brings to life the villain that we hate to love and love to hate. Not to forget Jones (of Frisky & Mannish fame), who charms the audience with his impeccable comic timing and innate hilarity. His first time performing in full, high camp drag, Jones is almost unrecognisable and couldn’t be more different from his balaclava clad drag alter ego Ruth Less.

Writer and creator Tricity Vogue has said she hoped that Heels of Glory would not be a “niche thing” but, instead, something that would appeal to the LGBTQ+ community and beyond. In light of what happened in Orlando and what is still happening to the community around the world, it is all the more important that we protect queer spaces like this, a place that celebrates and embraces differences, regardless of one’s sexual and gender identity. The grand finale is a perfect example of this: the company breaks into song and dance, the audience are invited to join them on the dance floor and everyone is encouraged to sing along to the final number, the aptly titled Don’t Let Them Drag You Down.

Packed with action, comedy, feel-good songs and the all-important message of self-acceptance, Heels Of Glory is the show to see this Pride Season.

More information on Heels Of Glory can be seen here: http://www.heelsofglory.com

Images: James Millar. Do not use with permission.