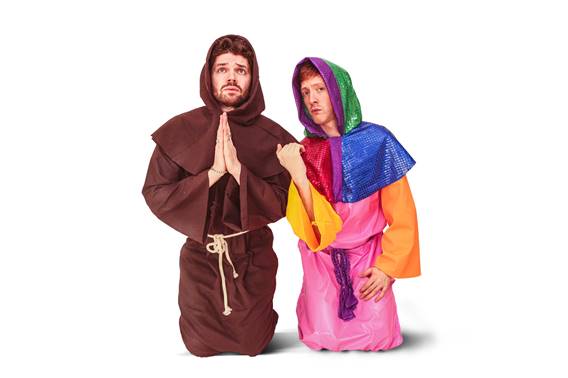 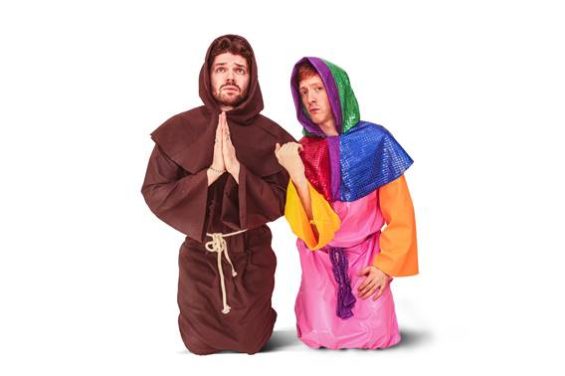 Guilt & Shame: Going Straight is the latest offering from comedy duo Robert Cawsey and Gabriel Bisset-Smith showing at the Soho Theatre. It tells the story of two friends, Rob who is gay and Gabe who is straight, who until recently partied together on the gay scene. Unfortunately, Gabe, who frequents the gay scene for the “desperate women” has an experience that shakes the core of his masculine sexuality. Following an epiphany in Jeremy Clarkson’s passenger seat he starts a new cult religion, Clarkstianity, complete with a gay-curing programme guaranteed to “turn Graham Norton into Tom F*cking Cruise”.

Both Cawsey and Bisset-Smith are relatively experienced. Both have done a gamut of minor television roles and have several small film roles under their belts. Cawsey has trained at the reputable École Phillipe Gaulier while Bisset-Smith has won an Off West End Award for Most Promising Playwright. These credentials make this production all the more perplexing: it is dismal.

On walking in we are handed hair nets in gender-traditional colours – why? The only thing more frustrating than wearing a hair net in the stifling heat of the studio room at the Soho Theatre, is never learning the reason behind it. Even at the end when the nets are exchanged for paper tiaras the explanation is unclear. And it’s downhill from here…

Jeremy Clarkson is a popular figure in British culture; his non-PC approach is often novel and amusing. He is not, however, an obvious hook on which to hang a plot about sexuality and gender stereotyping. Even the obscurity of the reference loses all comic effect once Bisset-Smith finishes the introductory parody. The Clarkson reference is a harbinger of the adolescent humour of the whole play. From steps to cure homosexuality such as “stimulating the female vagina” (the tautology is the least irritating thing about it) to the waspishly camp barman in the gay club, the jokes are crudely constructed and often lazy.

The studio room at The Soho Theatre is not the easiest venue: stifling heat, stifling proximity to the audience, and stifling lack of staging options. Combine this with woefully cheap costumes and props – we’re talking magic marker on a placard – and the whole show starts to look more than a bit sixth-form-drama-group or, worse, a pilot for an E4 show that should never get off the ground.

It’s not all bad. Cawsey is an actor with a talent for comic timing and facial expression. Bisset-Smith displays good characterisation and an ability to interact convincingly with the audience. There are some comic routines – the duo’s dance routine, the dubbed family members in the audience – that hit the mark and, though strained, the plot deals with a relevant issue. Both actors clearly put a lot into the performance and appear deserving of a success but this play is not it.