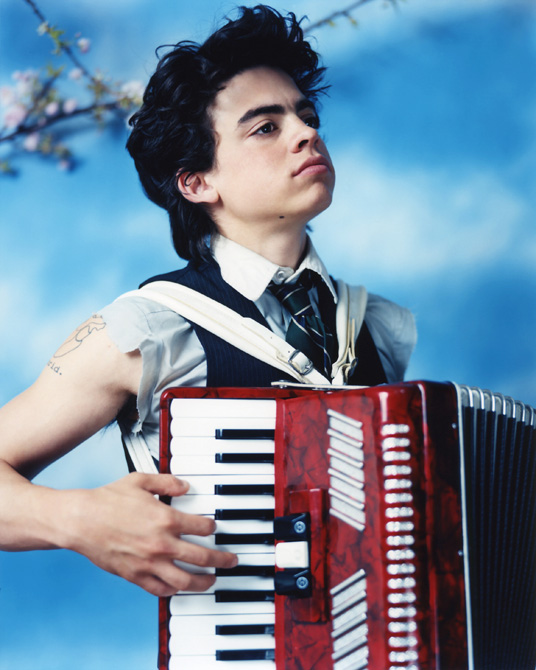 Crawling into a cellophane tent at the behest of a half-naked rogue who sings descriptive lyrics about puke might sound like the sort of experimental theatre you’d rather dine in hell than go see, but first impressions can be deceiving. Back in the Soho Theatre for a four-day run, New York multi-instrumentalist Geo Wyeth wins crowds over with the most unlikely of repertoires and natural charisma.

The short season marks his return to the venue after a guest spot at fellow queer performer Justin Vivian Bond’s Lustre. Wyeth himself is a female-to-male transsexual, but the repertoire of this solo outing goes beyond the usual fare of autobiographical meditations on sex and relationships from most queer-themed shows.

Wyeth is impossibly charming with his scruffy urchin looks and doleful expressions. Increasing intimacy with disarming oddball humour and many asides, he’s soon leading a mass of raised arms in time to the techno beat of his keyboard.

The biggest triumph of Geo Wyeth AKA Novice Theory are the songs themselves. Wyeth’s voice is not the most melodious – it sounds like something out of Alvin and the Chipmunks. But his singing comes from somewhere real and emotional, which makes for a moving listen and perfectly matches the many wonderful slices of music played. In one moment he’s doing a fabulously deranged zombie song, launching then into the gorgeous colonialism-inspired accordion ballad About the Dream, seen both in Lustre and on BBC’s Later with Jools Holland.

Creating art out of the obscure, the sloppy and the jarringly offbeat, Wyeth is undoubtedly a genius. Geo Wyeth AKA Novice Theory is a welcome opportunity to see some riveting performance art, in theory and practice.