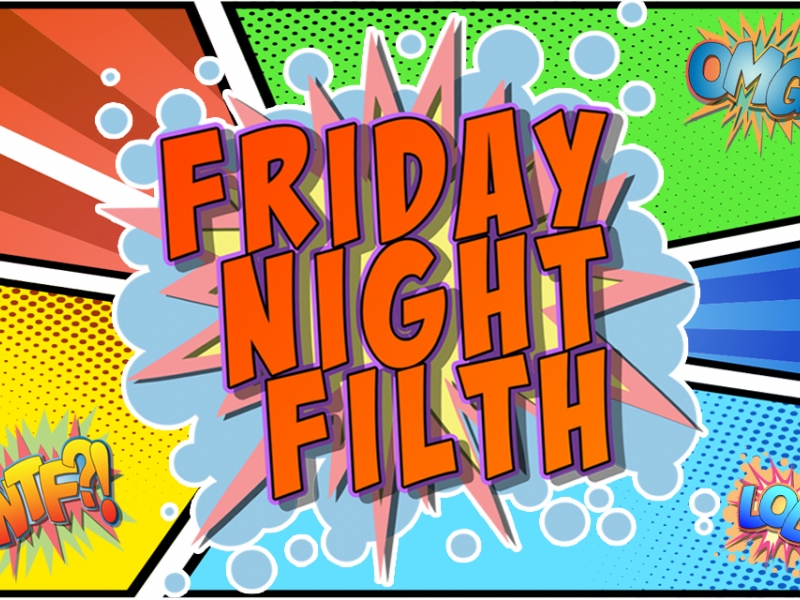 Now this is a rarity: a variety night with stand-up comics as a regular part of the bill. And that’s comics plural as regular Underbelly Festival event Friday Night Filth takes not one but two comedians away from their usual microphone stands and puts them in a tent alongside some fine cabaret stars.

I don’t have anything against individual stand-up comics per se but too many these days are pushing out tired and mentally undemanding material. From the lazy crowd control (“give me a roar if you’ve breathed in and out today!”, “is anyone in the audience from the town I’m in right now?”, “who here likes chocolate?” etc etc) to the painfully obvious observations (“everyone in Edinburgh sounds like someone out of Trainspotting!”) and the tedious tales (“today I went down to the Post Office and they tried to sell me some stamps – the cheeky bastards! What’s that all about, eh?” etc etc), their success seems to rely more on their personality and how pissed the punters are than actual talent or material.

The stand-ups on opening night (Chris Betts and Bobby Mair) are not the finest examples of their genre but, appearing as they do quite a few hours after gin o’clock, they give a presumably well-lubed audience a few chuckles and not much else.

Host Dusty Limits is happily still alive and kicking having been around the London cabaret circuit since Jesus was in shorts. The Australian’s vocal talent is phenomenal, apparently reaching three-and-a-half octaves at full stretch, and he still knows how to expertly work a crowd with equal parts insouciance and charm.

His banter, though, has become stale and has barely changed since he ruled the Café de Paris all those years ago; even if he was laid flat on a pub table with drinks placed on him, in this respect he wouldn’t be more of a coaster. Thankfully, his voice is still as fine as it ever was and his neo-Weimarean shtick remains lively and funny. Well, funnier than Messrs Betts and Mair.

Rounding off the bill is the thinking woman’s burlesque dancer, Lolo Brow. Renowned for her award-winning Lizard act, her recent routines have focused on gaslighting and gender identity. For this night, however, she returned to an older award-winning act, a delightfully debauched take on the ultimate kitchen saucepot Nigella Lawson.

For filthseekers everywhere looking for the way to shed the work week and move casually into the weekend proper, this night is the perfect way to do so.

Dusty Limits returns to the London Underbelly with his show Mandrogyny on 20 September.

The Ruby Darlings have a regular residency at Moors Bar. See their Facebook page for more information.

Lolo Brow will be part of House Of Burlesque 2.0 at Underbelly Festival and also hosts LADS, an all-female burlesque/cabaret night at Her Upstairs.

More information on all Underbelly Festival shows can be found here.