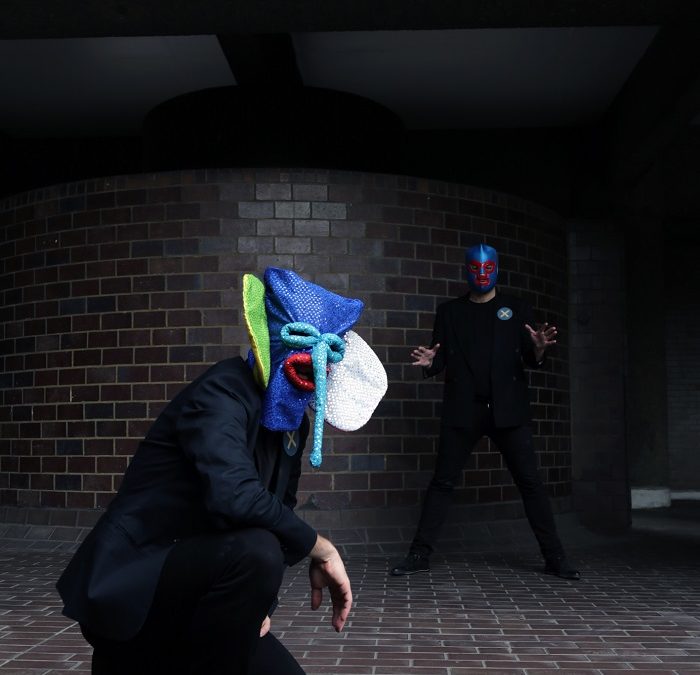 It is with measured trepidation that we venture out east to Haggerston’s The Glory to take part in Dis Place, a self-proclaimed “theatre game about immigration and democracy”.

The 8pm start time proves a little optimistic but, once descended to theatre level, it becomes clear that our time will be strictly regimented from here on in. Ten boxes with names including Stephanos, Nina, Mulonga, Sameer, Francesco and Jan sit atop bar stools, behind white lines which we aren’t allowed to cross. Yes, exactly like at passport control.

There is an intercom speech ­- met with guffaws from the audience – about “putting our great country back on track with properly controlled immigration” before our two hosts, faces covered in a Mexican wrestling mask and a Colombian Marimonda mask respectively, arrive. There’s some cringe-worthy dancing and the gameshow scenario is set up.

The boxes each represent an artist and, after hearing testimonies based on those given by real foreign artists currently working and living in London, the audience is asked to decide on which one of these gets to stays who has to leave.

Frankly, if you wanted to run from Dis Place right now you’d be forgiven.  Should you stay, it is impossible to predict whether you’ll enjoy the following hour as so much will hinge on the views of your potentially inebriated fellow audience members (we are in an East End pub, after all).

“Just because she wears Converse, has read ‘The Prophet’ and you reckon she’d be a fun hang, she gets to stay whilst a married woman in her late 40s must leave her husband and child of 14 years to go back to North Korea?! You home-wrecker! No, you…LIFE wrecker!”

Once whittled down to two finalists, there are strong soliloquies from our hosts, particularly tonight from Alejandro de Mesa who seems in his element as a Colombian drag queen. Victor Esses (who devised the show with de Mesa) shines in another of the five characters he must encapsulate, but it is a poignant highlight of the evening to actually witness talented actors onstage.

Sadly, bickering resumes. There is a brief and glorious moment when we stand in a circle, hands held, hell-bent on revolution. It doesn’t last long. A snap decision is made by our appointed audience leader who says one thing, then acts differently. Et voila folks: democracy.

We feel somehow disappointed in ourselves. We feel like the wheatgrass you couldn’t really taste in a thoroughly blitzed moral nutribullet. Perhaps the thing to be learned here is that popular belief is not necessarily the correct belief, and the most considered opinion is rarely the one yelled the loudest.  In his victory speech, our winner simply states “There are monsters, but they are few. We need to watch for those who make quick decisions without reading everything first.”

Downing a large drink upstairs afterwards, a sheepish member of our group approaches with cashew nuts as a peace-offering, saying they actually feel they made the wrong decision about the Korean mother. Next time they’d vote differently.

Dis Place continues at The Glory on 16th, 17th and 23rd of May. Tickets are £10 and are available online.