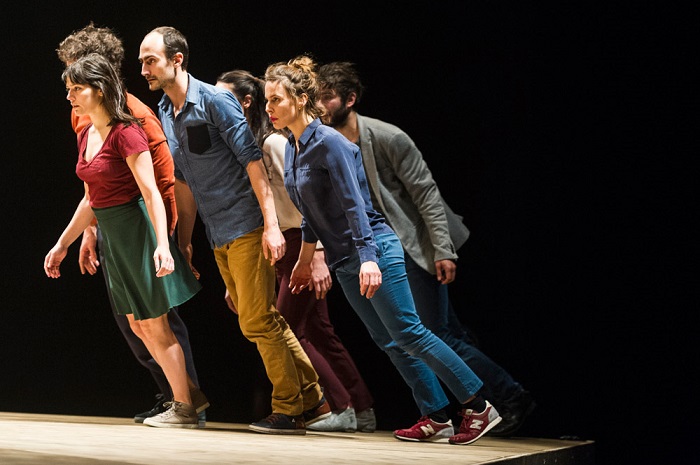 Six performers struggle to hold on to a platform that spins, shakes and tilts them in experimental dance theatre He Who Falls at the Barbican as part of the London International Mime Festival

The marketing for the show hints at the action unfolding through elements of acrobatics and in interviews director Yoann Bourgeois talks about sticking to “an essential principle of the circus”. The trailer and poster both show performers using their bodies and the centrifugal forces to stay upright. In truth though, this is much more a piece of contemporary dance and the action of the show is incredibly stripped down and the small section in the trailer might be the only instance of this really occurring.

It seems like if you want to create this kind of work, there are certain elements that become necessary, not least lack of obvious or discernible costumes, stark lighting, lack of set or props, doing less and staring into the void at intervals. This show has a huge spinning platform, but by employing all of the above elements it feels like much of the potential of this unique piece of apparatus is lost. It feels like he has missed a trick getting this amazing machine and then having performers shuffle about on it seeing through each other rather than really exploring the full capacity of what it could do. He talks about “tentative approaches to the point of suspension”, but after an hour I really wished the performers were a little more decisive in their approach.

There are some vivid tableaux and visual ideas. Essentially a metaphor for society, the performers on the platform do their best to stay upright confronting forces much bigger than themselves. This is a worthy idea to explore; trying to live with the presence of globalisation and the ever-increasing complexity of a world that seems to get faster and faster is the very essence of modern life. Like Circa’s The Return which played here prior to this show, associations with the ongoing refugee crisis also feel apparent.

Being “overwhelmed” is at the heart of this piece and the struggle the performers face is clear. The prop often evokes elements of childhood, of swings and roundabouts and monkey bars. It is watched and controlled by some kind of technician at the back of the stage – are they the victim of Gods playing with their mortality? are they they victims of other humans? the gods of global capitalism perhaps? Dictators? Who knows. It’s pretty open to interpretation. But the picture it paints is quite bleak. By working together they do manage to overcome some of the challenges they face, but only for a short while before it too overwhelms them.

He Who Falls is almost a really interesting show, but it somehow fails to feel fully realised; it clearly has depth, but fails to touch on an emotional level. It has good elements, but feels like there is some wasted opportunity. I can imagine that it will appeal to more to those expecting contemporary dance, rather than anything more high flying, so it may be worth seeing for yourself and trying to make sense of it.

Four years into this work Bourgeois says he feels “it is taking shape” – perhaps if it ever reaches its final state it will have developed into a more captivating experience. As it stands, for all of the themes of being “overwhelmed” the performers experience – I felt quite the opposite as a member of the audience.

He Who Falls appeared as part of London International Mime Festival.