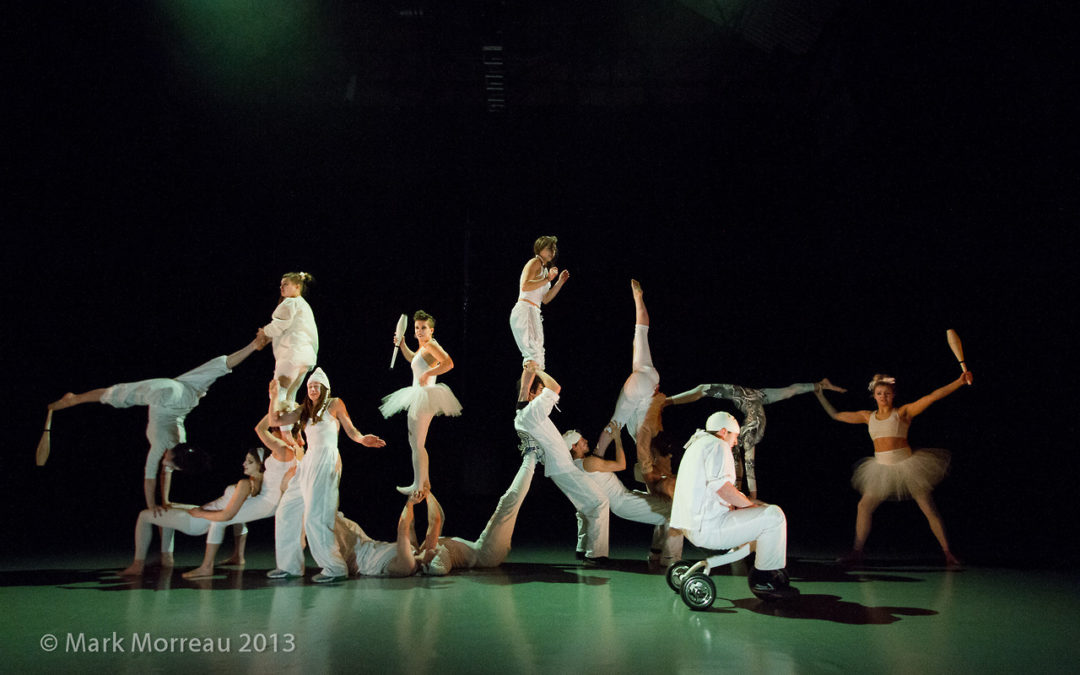 Ever wondered where circus performers come from? North London’s Circus Space runs a degree programme and we were there to see the latest batch graduate. 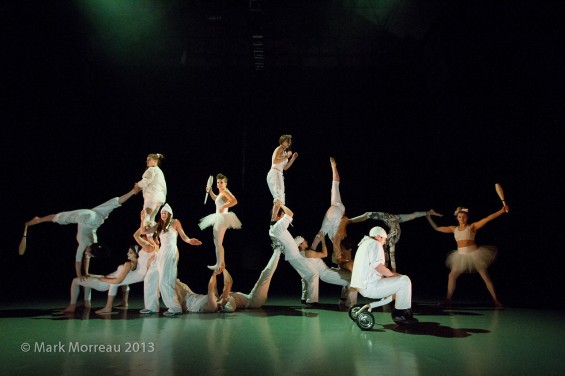 The combustion chamber at Circus Space is transformed with fixed seating and black drapes for their BA Hons 3rd year degree show. With a wide range of disciplines on show, the final year students pull out all of the stops and some truly dazzling routines.

Between solo acts, a large chorus of performers bring a range of scenes to the stage, mixing comedy, hilarity and a sort of sick humour to the transitions. We hardly notice the equipment changes as they poke fun at circus cliques.

Arce López Gutiérrez opens the show on the chinese pole. With a comic Mexican twist, this charming performer delights the audience with some suggestive glances. He shows off great skill on the pole and provides an entertaining routine with some impressive move combinations. Gutiérrez certainly understands and appreciates the idea of pace in his routine, taking time to connect with the audience and make us laugh. This routine is well rehearsed and a perfect opener to the show.

Lydia Harper takes to the static cloud with grace and fluidity. Her routine shows control and poise as she moves between the two apparatus with smooth transitions, showing flexibility and strength in a delicate yet enthralling routine. Keeping the performance polished right through to the end, she finishes off beautifully by spinning on the wrist strap as she is slowly lowered her to the floor.

Lynn Scott’s juggling routine is, although comic in points, a little disappointing. It is unclear whether the continuous missing of catches are for comic value or whether the performer is just having a bad day. She rounds off the routine, however, with an impressive foot throw, landing a ball in a suitcase and prompting relieved applause from the audience.

Gonzalo Basualdo presents a contemporary vertical rope routine with a matching soundtrack, filled with spectacular moves. From graceful slides down the rope to controlled falls, the range of skills is both entertaining and well structured. He certainly knows how to grab the audience’s attention, as he falls to reveal the rope knotted around his ankles. With a great building and release of tension throughout, Basualdo has the audience waiting with bated breath.

Dressed as a boy scout, Tom Ball has the audience giggling at his tongue in cheek static trapeze act. Working his way through some immensely camp dance steps and up the ladder to his equipment, he descends upon the rigging and squeezes through it, wiggling as if stuck. He goes on to fill every last second of the enthralling routine with fluid movement, impressing us with his constant movement in this clean, polished and excellently presented piece. Complete with balances, controlled falls and catches and coupled with excitable and infection energy, this routine and its performer are rewarded with rapturous applause.

Razzle-­dazzle is the name of the game in Helen Orford’s routine, with sparkles in overdrive and some mighty shiny hula hoops. She presents an energetic and fast paced act displaying a vast range of skills. With superb hoop control, Helen works the hoops using almost every part of her body, including her feet, hands, legs and torso. This spectacle is designed to wow and is polished off by an impressive multi-hoop split. Helen dominates the stage in a whirl of colour and shine, with hoops spinning at impressive speeds here, there and everywhere, providing a perfect flashy finish to the first half of the show.

James McCambridge’s tightwire set opens the solo acts of the second half. When his tricks go well they are well received and applauded by the audience. Unfortunately there are a lot of falls and the routine lacks flow. The hard electronic soundtrack gives the set energy, but this drive is broken by several falls.

A beautiful performer with stunning movement, Beth Williams presents a clean and stylish act, teeming with gorgeous flow and grace. She is a joy to watch as she creates beautiful shapes with ease – the choreography matches the music brilliantly and there is a real musicality about her performance.

Heidi Hickling­‐Moore’s rope set is interspersed with insightful comic touches. Throughout her ropework, a spoken audio track reveals such worries as “I hope they’ve noticed my outfit” and “I can’t honestly remember what the next move is”. It’s an interesting mix of the spectacle of performance and the hilarity of her innermost thought. She completes the set in some impressively high silver heels as confetti rains down on her in her finale move.

Matthew Green’s impressive juggling routine blends humour, skill, technical moves and great dance sections. Matthew works with all of the materials available, juggling the clubs one-handed and then blind in a back-to-front jumper with the hood up over his head. With choreography that teams up brilliantly with the music, he keeps a dark and infectious energy going through each difficult move combination.

One of the high points of the entire show, the aerial hoop and bungee act presented by Ben Brown shows off his acrobatic qualities and flexibility. Brown works with the hoop and moves around it with dexterity and finesse. Swinging and bouncing the hoop towards the end of the routine, he creates some gorgeous shapes and shows off a glossy and elegant style.

Louis Gift and Berem Damico work together in a hand-­to-­hand acrobatics act that leaves the audience gasping with tension and amazement. Including a trick in which Damico spins on Gift’s head by his stomach, they piece together a variety of balancing and throwing movements to a live harp music accompaniment. They smoothly transition from one trick to the next, leaving valuable time in between blocks of movement to allow an appreciation of their craft.

Circus Space is showing off some amazing talent in this show, with many performers showing great future potential. Keep an eye out for these performers on the circus scene.