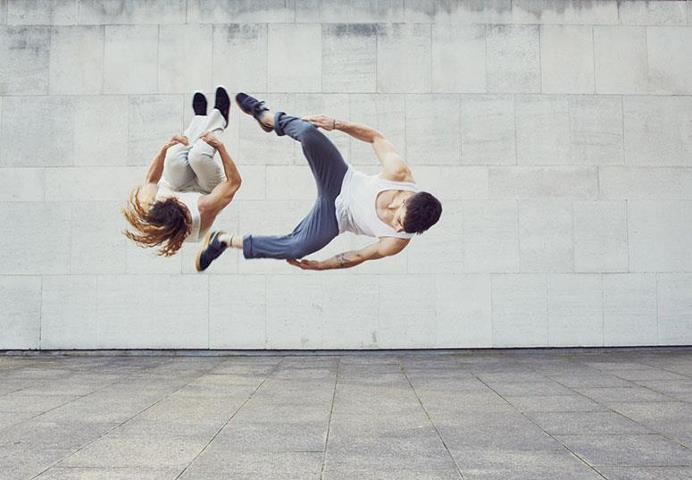 Those looking to experience the amazing diversity of modern circus have a new show to whet their appetite. 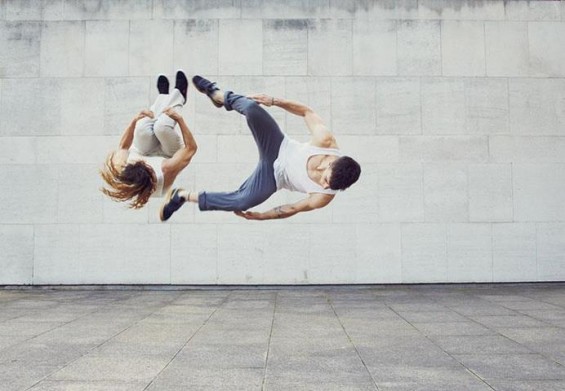 Louis and Beren combine parkour with a singalong.

A new collaboration by The Albany and circus company Upswing offers up miniature “bites” of circus. With each act given only a short set to shine, the evening strips back the glamour and glitz. There is no set stage area. Instead, the hall is simply a large circular void surrounded by chairs and tables which gives the audience a great view of the proceedings. While this is by no means an intimate venue, the openness of the space definitely brings the crowd closer to the action.

Circus Bites showcases some of the best in upcoming and established London circus talent. Linn Broden’s slack rope routine is stick and flawless, full of balance and splits, assaulting the rope with swings and impressive rolls. Two Men present a slightly unsure, but still comically sturdy, two-person juggling routine. Despite the occasional problem, we admire their persistence and concentration.

A highlight of the evening is Sebastian Khan’s aerial hoop set entitled Counting. It is an emotional routine with animalist jerking that is choreographed well to the music. Any act would find it difficult to follow that strong display of agility. Joli Vyann, a hand-to-hand quartet mixing circus, dance and theatre, goes from funny to harsh and dramatic in quick succession but the act lacks substance and the group definition. Are they a dance group or a circus act? On the basis of the act, we’re not sure.

Lost In Translation Circus erected a Korean Cradle as part of their act which opens the second half. With an industrial feel, the routine is swift and slick. Aislinn Mulligan follows with a silks routine that successfully keeps the audience glued throughout. She has mastered the art of working the climbs into her routine, choreographing her movements so we almost don’t even realise she is simply working her way back up the silks. Some sleek falls leading to a big finish get her a rapturous applause.

Aside from the circus, the audience is treated to music from DJ Jean Genie, with hosting and audience distraction duties for the evening handed to Dusty Limits and Tricity Vogue. Though the pair entertain the crowd with jokes and sing-a-longs (mostly surrounding the subject of alcohol), there are noticeably large gaps between acts. The sheer amount of equipment and stage changes breaks up the evening and disrupts the flow.

The true finale was a set by Louis and Beren. The duo met at Circus Space and since then have combined parkour (free running) with tricking to create this mellow set. The exhilarating routine entertains with very little musical accompaniment, a testament to their commendably designed and structured routine. Unfortunately, the chosen closing to the show was a typical brash sing-a-long which, although entertaining, was superfluous.

Overall, the evening is thoughtfully composed. The stripped-down raw nature of the venue and lack of decoration is a welcome change from the standard circus environment. The episodic nature allows the better acts to shine yet the evening is let down slightly by a lack of flow and some unsure performers who are either had a difficult time when it was their turn or did not suiting the theme of the evening.