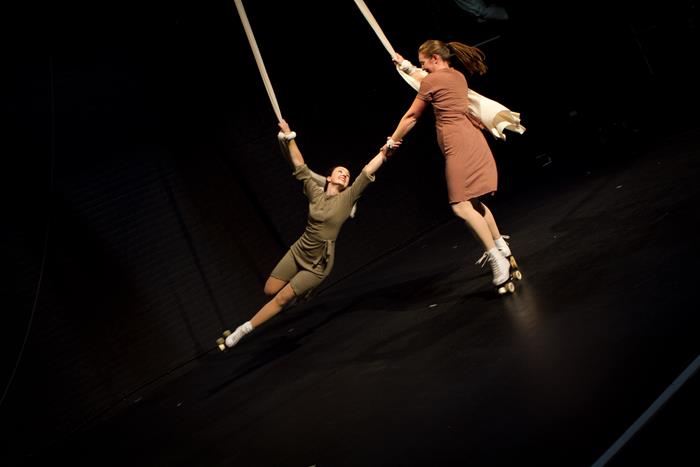 Heard the one about the big top show hidden away in a local arts centre? Circus Bites does away with the fineries of the fairground to focus on London’s plethora of skilled physical performers. 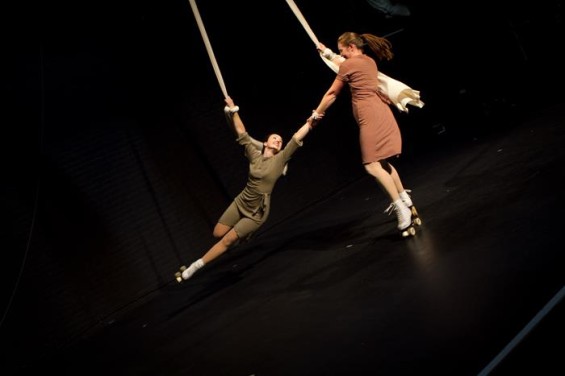 For North Londoners who will find any excuse not to cross the river unless dragged kicking and screaming, it may come as a shock to them to discover that there is a reason to go to (of all places) Deptford. Those of you who don’t believe me should take a trip to the Albany, surely one of the most unique and interesting venues in London. The space allows for tables and chairs all around, with an upper balcony that means the audience there can see the action comfortably. The very reasonably priced bar helps to make this an experience immeasurably better than the vast majority of circus venues. It also gives loads of room for the performances. It’s great to find new places in London that feel like neighbourhood secrets.

Circus Bites has a strong line-up of corde lisse, hand-balancing, roller-skating acrobatics, acrobalance, and static trapeze. The majority of acts feature artists in a stripped down role, without character or costume alongside music without vocals. Belle Kinetica‘s inclusion in this bill is a questionable decision because, while their duo piece Life on Wheels (a small section of their one hour show set in the 1940s about friendship between two women) is good, it doesn’t really fit in with the rest of the evening’s show.

Another aspect that sits strangely is the dynamic between compères Tricity Vogue and Jamie Anderson and the acts they are introducing. Vogue twice calls one of the acts “flying trapeze” when it is quite clearly static, a mistake which would be inconceivable to anyone with even a basic knowledge of aerial arts. This is modern circus, a pure exhibition of skill that is both raw and human, whereas cabaret singers Anderson and Vogue are slapstick, camp and playful. The contrast is a little bizarre, to be sure.Again the two of them seem confident and comfortable on stage, but it comes across at odds with the show’s concept.

All of the acts tonight are skilled and performed to a high level. Nikki and Jean Daniel‘s acrobalance routine is a particular highlight. Their My Angel Rocks Back And Forth is a hesitant piece that is well choreographed and makes informed use of the space. A mixture of well executed transitions and something quite gentle and soft, the ebb and flow of the movements echoes the title and draws you in as the two move from beautifully accomplished handstand lifts, to subtle holds that are sensual and somehow incomplete.

Paul Evans‘s I’m A Human is another wonderful turn filled with dynamic moves making a complex piece that is filled with movement while Ana Perez De Manuel‘s rope act To Be Born is unsettling and confrontational, though it feels slightly unfinished. The silence in its first half amplifies her breathing, creating an atmosphere of struggle mixed with fear, but when the music comes in the piece becomes too disjointed.

Arete by Zoe Jones is strong and only one slight wobble stops this from being perfectly executed. Her background in gymnastics is obvious as her hand-balancing is clear evidence of someone with a huge wealth of experience to draw on.

Circus Bites then, is a show featuring plenty of talent, but feels incomplete. As it stands, it hasn’t quite got its own identity as it lacks cohesion but there is much potential. With the capital’s biennial big top extravaganza that is CircusFest 2014 about to roll around, Circus Bites could be about to become the neighbourhood secret on everyone’s lips.