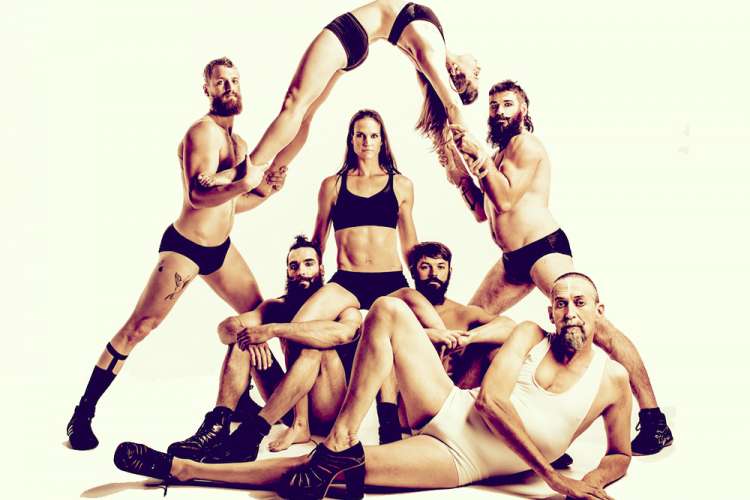 Barbu is, at heart, a high energy, chaotic mixture of acrobatics, object manipulation and beards. Especially beards. Based around a great cast of six multi-skilled performers, a clown character and four musicians, it has a range which is thoroughly explored throughout the seventy-five minutes or so of a production that is unashamedly fun and a reminder of what a pure joy circus can be at it’s best.

Sitting in the front row at the Spiegeltent, I could taste the beer that flies from a keg, feel the sweat hit me, and feel the aerialist come within touching distance as she swings past. It is really a great experience. There are some large scale productions that need the grandeur of a bigger spaces – but it is wonderful to be this close to the action is such a lovely venue for a show that really fits here.

Cirque Alfonse came to London last year with their show Timber which was cuter and more family friendly. This show is much better, though lacks some of the coherence of it’s predecessor. The costumes are a bit all over the place, sort of east London hipster, meets traditional circus, meets nonsense. Sometimes this works well, at others there seems to be lack of clear or consistent thinking.

This lack of finishing off encroaches into other parts of the show. There is a mentalist who brings in some elements of comic release – but seems a bizarre character that isn’t fully formed. I’m really not sure why he is strung up and beaten and attacked with custard pies towards the end. I didn’t feel like he had particularly deserved it.

Thematically, the most interesting part of the show is the exploration of masculinity. “Barbu” means “bearded” in French (the company are Quebecois) and by embracing this so traditionally manly look while at the same time satirising it and opening it up for ridicule, the company tap into a wide range of debates on gender that are very present. The childlike “girly” ribbon twirling to counter the big manly acrobatics at one point is a great juxtaposition. The feminine eye makeup the cast wear in the production photos is another example of refusing to recognise traditional gender norms.

A point in the show touches on homo-eroticism quite casually which raises a pertinent question: what makes a manly man manly? That further begs the question, what role do the two female performers take? While masculinity is clearly being questioned here, the beardless find themselves in much more familiar gender territory: an aerial hoop performance is done in stockings and suspenders and a nearly naked girl is put in a box that is cut in half by the magician. There is one moment where we see a video clip of a girl shaving her face, but it’s a small detail. Perhaps it would have made more sense to either have no women in this show – or to decide how they would fit into the meta-issues being explored.

If the entire production feels a little incoherent, at times that is also one of it’s strengths. It really could go anywhere. The music all played live veers from something epic and grand, to a sort of hybrid disco that sounds like it could have been the soundtrack to an 80s video game. There are some great set pieces – and the real strength comes from the four male performers who juggle cups and clubs together, make giant acrobatic shapes and show off on teeter-board. Their energy is infectious and they manage to be both highly competent and show-manlike, while equally ridiculous and charming. One act where a performer uses a cyr wheel while wearing a giant squidgy disco ball around their waist is a perfect example of this.

Ultimately this is a high flying spectacular show that leaves you feeling uplifted. It may be daft, but it’s skilful enough to make you leave aside any cynicism. It may not have thought through all the answers, but there is enough engaging imagery and ideas to give Barbu a unique sense of character. It will also help you to escape life’s realities for a brief while and, sometimes, that is the very best thing a show can do.