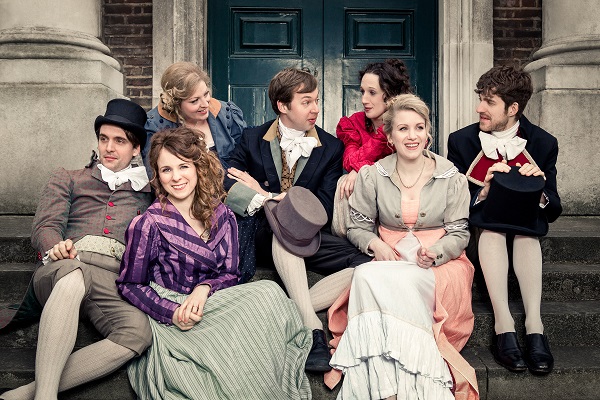 It is a truth universally acknowledged, that a single man (or wo-man, or indeed any individual on the genderqueer spectrum) in possession of a (something funny – duck? mallard? [comedy = specificity] um, mongoose?) must be in want of a laugh.

You see? This improvised Jane Austen novel/comedy business is piss-easy. I’ve only had ten minutes and I believe the results speak for themselves. However, not everyone has my extraordinary grounding in 19th century novels so the cast of Austentatious: An Improvised Jane Austen Novel will consider it a high compliment indeed when I say that theirs is a show most deserving of your shiny guinea.

The title of this entirely improvised show-within-the-show is always plucked from audience suggestions. So it was that the lost classic “Beards & Prejudice (in Shoreditch)” was born. The excellent Cariad Lloyd  and Joseph Morpurgo played star-crossed lovers – a lowly beard shampooing wench and a entrepreneur aristo-cum-media-node-cum-twat and the rest of the company filled out the supporting roles as a family of struggling flat white merchants. Yes, there were Nathan Barley and Portlandia references ahoy, but there were also some delightful and unexpected jokes about beard soap and there’s nothing so thrilling as watching a group of seasoned performers mock and dump one another in difficult situations.

It’s obvious that the cast have worked hard to get their comic rhythms so joyously in sync, and their giddy fun is infectious. Rachel Parris, as an over-caffeinated, 12-year-old socialite danced a vigorous Lydia Bennett goon jig that I could have watched for the full hour. The music was provided by Alex Judd, a violinist able to adjust his accompaniment to underscore the gags with great skill and subtlety. And, to be honest, a violin just adds a lot of class in general.

Although their genteel reign over the South Bank may be over, Austentatious will be fanning itself coquettishly all over the Edinburgh Festival in August, with year-round London residencies at the Old Queen’s Head and Leicester Square Theatre. So go out and ardently admire and/or love them, yeah?