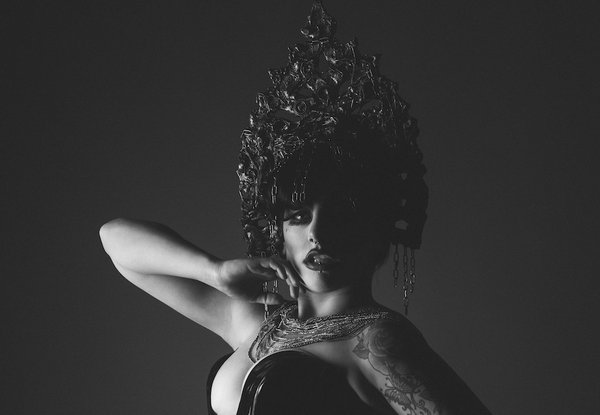 From the winner of the “Most Innovative” award at the prestigious Burlesque Hall of Fame, the London premiere of Aurora Galore’s highly introspective new show Glamorous Weirdo is a colourful affair.

With liberal use of indoor smoke machine, a fuchsia Aurora bursts onto the stage. She is a powerhouse with an immensely supple upper back. Her Charleston, whilst ripping a froofy pink skirt to shreds, is a highlight. Galore’s strength is her dynamic: a commercial dancer who strayed purposefully from that well-beaten boom-boom-kat track into burlesque.

Aurora never slips on (or off) a heel or stocking tonight, favouring a flat jazz shoe. Although bedazzled with the same rhinestones as the sippy cup she’s handed after this opening number –whilst assistant Lilly Snatchdragon fans the dancer’s crotch – surely these shoes can only be described as burlesque’s ultimate passion-killers, perhaps fit only for yet another touring production of CATS?

“Galore’s strength is her dynamic.”

That’s the point, though: Aurora doesn’t care. She accepts the mic still down to her nipple tassels, and whilst rearranging her girls and changing into a sort of papal gown with Miss-Piggy-does-Statue-of-Liberty headdress, regales us with anecdotes regarding her ongoing gas problem and recent trip to the doctors to give a stool sample.

Our main issue with this evening is the lack of performers and to an extent live content. Glamorous Weirdo is billed as Aurora plus ‘an array of other-worldly circus performers’. In truth there are three performers, if you include Aurora herself. If not (and if you count her as the host, she’s not) it’s two.

Jonathan Finch hand balances early on and becomes the perfect other half to his similarly snake-spined husband Ben Brown later in an intensely loving aerial net duo. Highly impressive? Heck yes. Is there enough variety here to sustain an hour long burlesque show on London’s Southbank? No.

“Miss Galore swigs from her sippy cup and tells about her Eminem sex dream.”

As Miss Galore swigs from her sippy cup and tells us about her most recent Eminem sex dream, a huge screen is clunkily carried on behind her by two stage-hands. We are then made to watch a short film involving clips from the movie Psycho, The xx’s Angels guitar riff with Bastille’s front man singing TLC’s Scrubs (a cover track released by Bastille in 2012 under the title No Angels) and plenty of apparent bleeding from Aurora’s eyes and mouth. Oh, and the threading of a needle through her septum. With no live action in front of the screen, we would argue that live theatre should be kept live. We didn’t come here to watch movies.

In truth, it’s all gone a bit dark and a bit Pete Tong. With a touching motivational bit about bullying, going to the gym, ultimately realising your own happiness and inner light without the need to impress your bullies Aurora lifts our spirits somewhat, yet there is an off-putting track in the background, like the musical accompaniment to a scene where somebody dies on Sons and Daughters.

Miss Galore finishes on a high, however, by showing us how accomplished she is with fire. The choreography may become repetitive at times, yet truly can she eat a flame with both ease and musicality.

It is with a heavy heart that we leave underwhelmed. More could have been done to lift the levels of both the Glamour and the Weirdness here.

This Is Cabaret rating ★★★