Review: An Evening of Burlesque 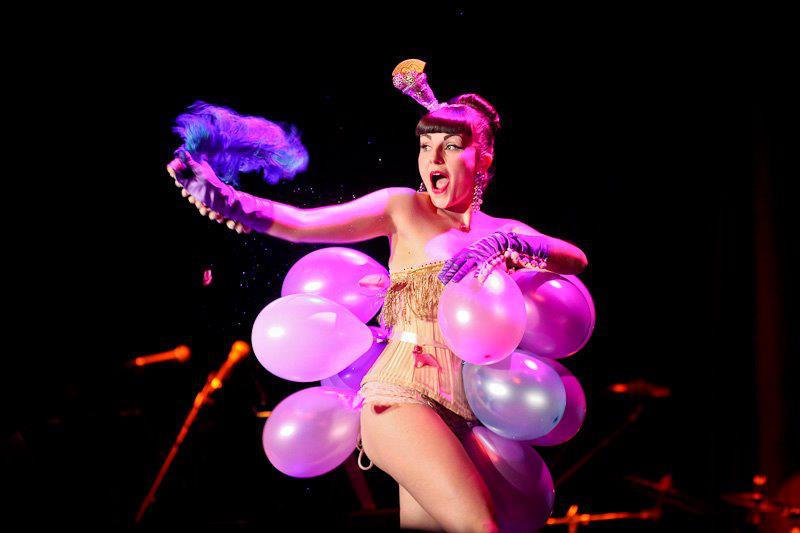 If you like your cheesecake with a hearty side of laughter, you’ll be swayed by An Evening of Burlesque. The touring show has introduced some of London’s finest variety performers to British and continental audiences. Record-breaking sell-out dates have greeted the eight-strong cast in cities as diverse as Padua (1,700 people), Southend-on-Sea (1,500), Milan, Dresden and Copenhagen, proving that cabaret is an English export in high demand.

Following an engagement at the IndigO2 in Greenwich last October, the show returned to London to give the Blackheath Halls its first taste of burlesque. The same could be said for many if not most of the public, judging from the tentative whoops and cheers that surfaced awkwardly here and there, with applause erupting in unison only at the end of acts (and during the circus routines: everyone knows when to clap in those).

Compère Kiki Kaboom tried to go easy on the virgins, but nevertheless graced a few laps with a sit and gave three patrons a chance to debut their bump-and-grinding onstage. Both of Billie Rae’s inventive numbers, including an endearing clockwork doll dance en pointe, suffered with costume struggles and a malfunctioning confetti cannon. Hotcake Kitty and Slinky Sparkles, on the other hand, instantly charmed the pants off the auditorium with, respectively, a balloon pop at close quarters and a graceful, insinuating fan dance topped by vigorous tassel-twirling. 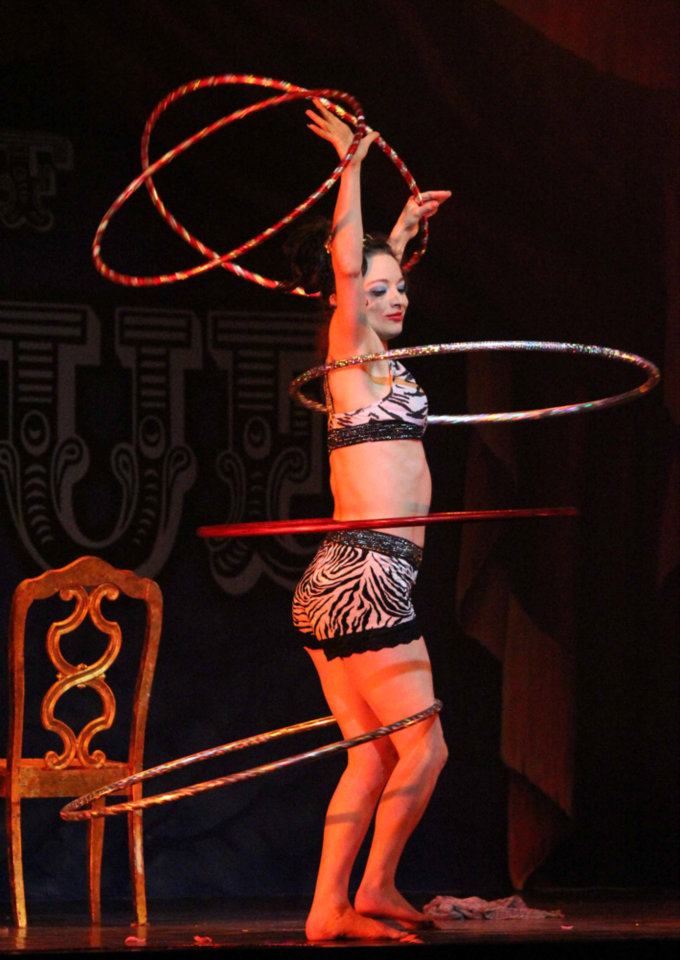 The sizable stage at Blackheath Halls offered the bill’s circus acts the ideal setting for their feats. Against a full-size proscenium, Count Adriano Fettucini’s signature unicycle striptease comes to life with impressive antics that make onlookers hold their breath. Similarly, Kalki Hula Girl is a joy to behold as she stumbles upon her hoops, gradually building up her accomplished drunken hula hoop act. The acrobatic A.J. James inspired laughter and awe in a fine display of music hall irreverence, instantly connecting with the audience by means of his insolent comedy and a dangerous knife-juggling act executed on a balancing skateboard.

Boasting a crisp voice and sharp bawdy wit a la Mae West, headliner Amber Topaz contributed two excellent strip-cum-singing routines. One, her Jessica Rabbit number, sees her crooning Why Don’t You Do Right? while enjoying some silent, yet passionate backup from a stuffed Roger Rabbit, followed by a provocative tease to Blues in the Night. To end the Evening, the diva got into a more athletic mood, launching into an energetic shimmy-and-shake chair dance through Liza Minelli’s Cabaret and Benny Goodman’s Sing, Sing, Sing (With a Swing). Hitting a fine balance between funny and sexy, the diminutive diva knows how to put a larger-than-life act for crowds of any size.

For one used to the intimate supper clubs and pub-sized venues of London’s variety circuit, it’s nothing short of exhilarating to see a show with high production values, where spotlights follow performers among the tables and the sound flows clearly through a room with proper acoustics. Still, in a stage of that magnitude, it’s visually underwhelming to see artists picking up their props from the bare floor as their acts progress. 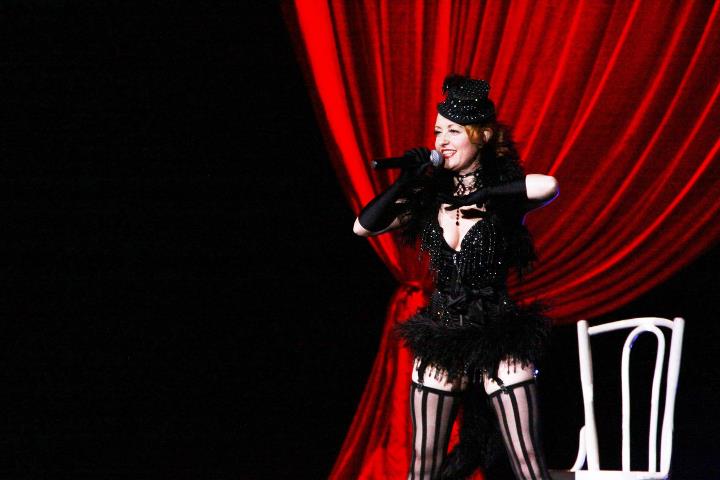 Life is a cabaret for singing burlesquer Amber Topaz

For patrons unused to the genre, An Evening of Burlesque is as grand an introduction to cheesecake glamour and variety entertainment as they could hope for. “Educating audiences that don’t have their own scenes is a driving concern in every show that I create,” says creative director Sean Mooney. “It’s a shame when people end up paying ten or fifteen pounds to see a bunch of amateur girls who think buying a corset makes them a burlesque dancer.” A seasoned London producer with his own company, Beyond the Cabaret, Mooney’s credits include a West End Christmas show with mash-up duo Frisky and Mannish and several engagements of The Folly Mixtures Revue, the homonymous troupe’s ongoing residency at Soho haunt Madame Jojo’s.

You won’t be able to catch the glittering revue any nearer to London than Croydon until October, when An Evening of Burlesque is set to play the IndigO2 once more. In the meantime, they’ll be visiting Canterbury, Hastings, Birmingham and Norwich among other English municipalities, beginning with Horsham on Thursday. Check the website for further dates and cities, including Manchester and York.