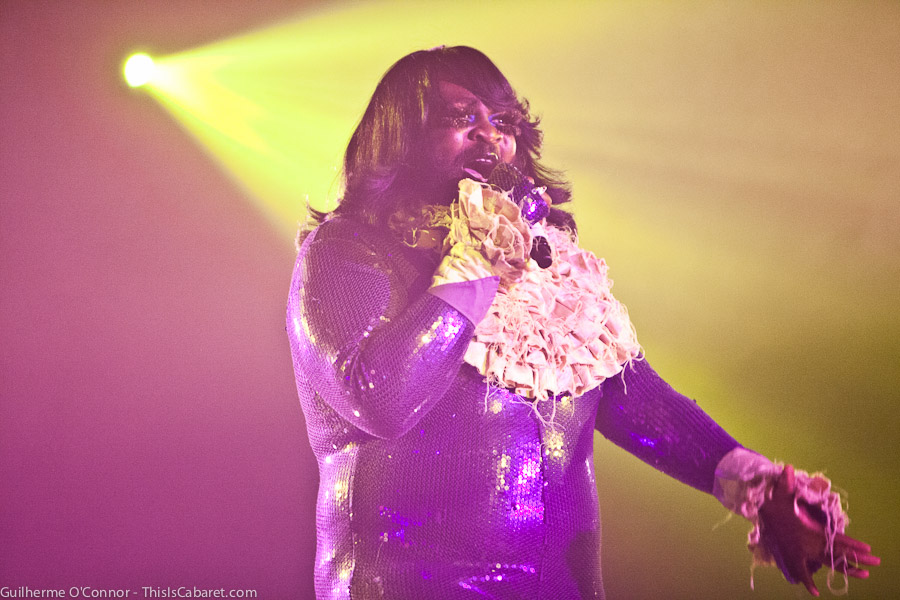 Hello europhiles! This is London calling with our scores for last Friday’s Live Alternative Eurovision presented by Time Out Live. We’ve been knocking back the sherry with our pinkies aloft (of course) so some of the scores are a bit arbitrary. But only some. 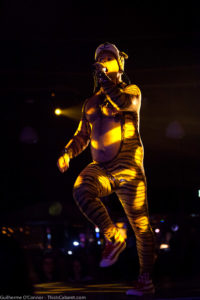 Imagine a hairy singing James Corden poured into a skintight PVC tiger outfit with the belly part cut out accompanied by a Spinal Tap-esque guitarist and drummer. After the opening cry of “Release The Tiger!”, I wish I had my skis handy because it was all downhill from there. This sub-pub rock trio desperately need a new angle; I suggest one hundred and eighty degrees.

Pete Cunningham has dug a rich vein of humour in recent years as Frank Sanazi. With new creation Tom Mones, he’s plowing an entirely different coal seam with his wisecracking take on a certain hip-swinging deep-voiced talent-judging knicker magnet from the valleys. Singing a song about Alzheimers to the tune of Delilah may have seemed in poor taste for some of the audience but, as suggested by Jasper Carrot, he perhaps needn’t worry too much about letters of complaint.

Separately, these two are star acts. Jayde Adams has stunned audiences from the Brickhouse to the Royal Vauxhall Tavern with her thick Brizzle accent and divine operatic talents. Russella is an accomplished actress who is famed for her onstage routine of making pancakes and then flipping them while doing the splits. Their duelling divas routine was amusing but never quite gelled. 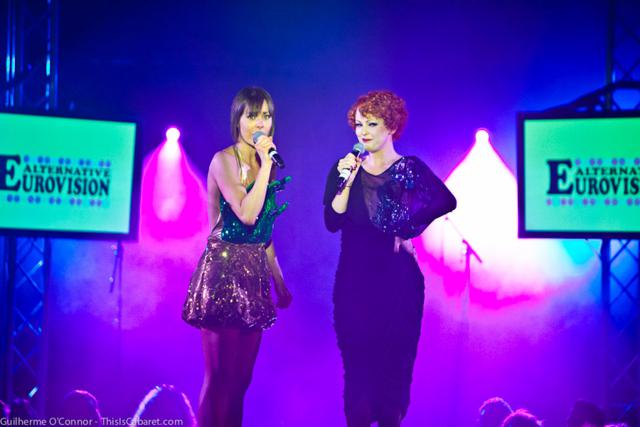 From the moment he appeared, it’s apparent that former Cambridge Footlighter Des O’Connor knows exactly where the boundaries of “good taste” are: right behind him and getting further away. Standing buck-naked with only a guitar, his tale of the origins of Dirty Sanchez (the legendary sex move as opposed to the fifth-rate Jackoff jerkoffs) was a filthy treat of eye-watering detail.

Doing remarkably better than The Hump (hint, hint Eurovision song selectors), Frisky and Mannish are the masters of pulling down the pants of popular music and leaving it looking slightly more ridiculous than it was before. George Michael and Gloria Estefan were re-invented before my eyes before Frisky treated an audience member to an impromptu lesson in paso doble. Like the metre-long bar of Toblerone, their Eurovision routine was great but too much to take in at one sitting. 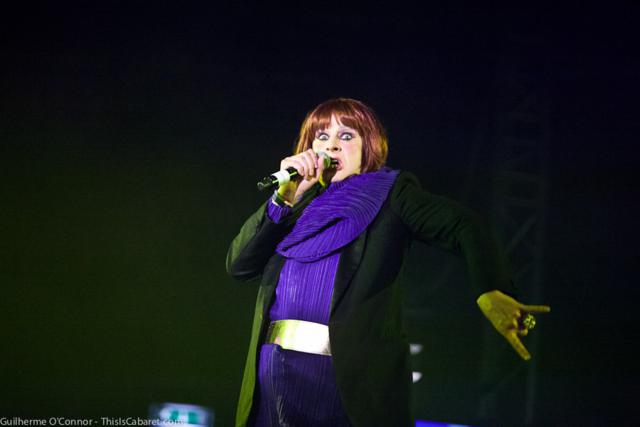 Jonny Woo as Mary Portas (or is it the other way round?)

An unabashedly straight interpretation of what was required by the evening, Lili La Scala dove into an operatic version of Abba’s Money Money Money like a salmon into a stream. Was it a poke at the candidate from Greece (see below)? I don’t know and don’t care because for the short space of that song, La Scala’s effort was a bombastic tour de force of sheer skill and charisma.

One of my favourite ever character comedy creations, Sarah-Louise Young’s La Poule Plombée is Gallic existential angst made flesh.  Her original song What Has the English? has had a few lyrical tweaks, with Mary Whitehouse now standing in for the late Amy Winehouse, but other than that, it is a classic number which the audience eagerly lapped up.

I almost got whiplash the first time I saw Jonny Woo’s impression of the queen of the high street, so sharp was my double-take. The clothes are perfect, the stance and gait are identical and Woo has taken Portas’ strident attitude to its logical conclusion with a rap number both authentic in tone and lyrically: “Who thought this Saturday girl would run the motherfucking world?” Who, indeed?

Already a global cabaret legend, Le Gateau Chocolat has been busy wowing La Soirée audiences this year in London and Australia.  Words could never do justice to this man’s talent, who didn’t so much arrive as explode on stage as he gave South Park‘s Chef anthem Chocolate Salty Balls a shiny new polish. The third operatic number of the night, it was a clear favourite with the audience who voted it (with the aid of an oh-so-scientific clapometer) as the night’s winner. 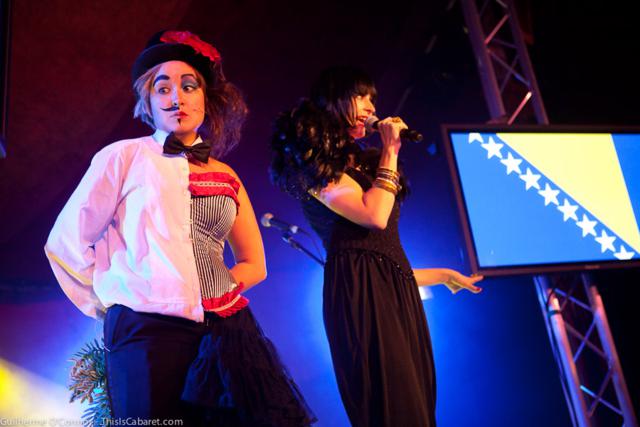 EastEnd Cabaret represent Bosnia and Herzegovina at the Alternative Eurovision contest. A hint at their mysterious origins?

You know when a band takes one of your favourite songs, performs it live and somehow make the song a whole heap awesomer? That. One of the greatest character comedy creations of recent years combine the talents of vamp-chanteuse Bernadette Byrne and half-man-half-woman Victor Victoria to sublime effect. Their latest anthem DangerWank has all the hallmarks of the classic EastEnd Cabaret songs of yore, being the kind of utter filth you’ll be singing for days in inappropriate places. Although I heard the song two days earlier in their headline gig at the same venue, it wasn’t the all-out, near-literal re-enactment of the lyrics performed here.

Anna Greenwood and her twelve (twelve!) outfits did a fine job taking over from the 2010 and 2011 hosts Petra Massey and Toby Park of Spymonkey. The technical team deserve praise just for not being as godawful as last year’s shambolic shower; indeed, they didn’t put a foot wrong.