Race Horse Bring Their Rollercoaster Circus Show To The UK 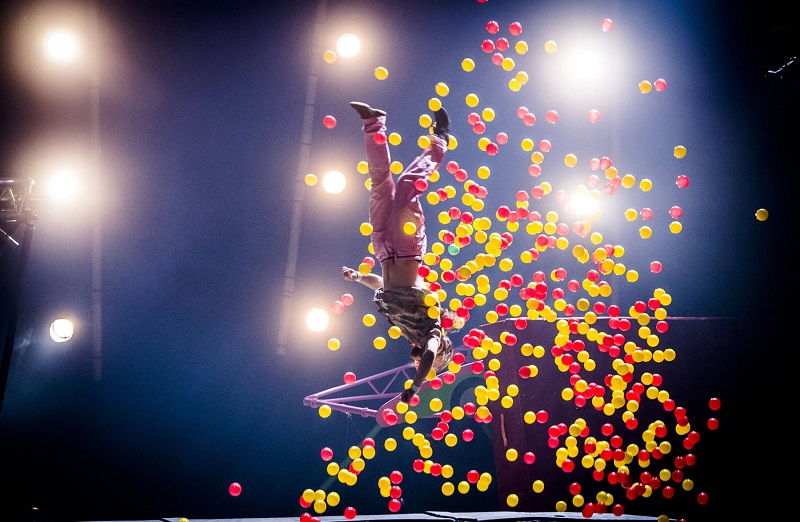 Last year Finland’s Race Horse Company brought their wild circus extravaganza Super Sunday to CircusFest 2016 at the Roundhouse. This year they return with not one but two shows, taking Super Sunday and Around – a circus show for children – on a UK tour from this month until 3 June 2017.

Filmed during the 2014 run, here is a breathtaking taster of what to expect from Super Sunday.

We sat down with Rauli Kosonen and Kalle Lehto, founding members and performers of Race Horse Company, to find out more.

Race Horse Company was formed in 2008 – how did it come about and what was the Finnish circus scene like back then?

Rauli: Race Horse Company started as the dream of three circus students who wanted to create their own raw physical circus show and tour around the world. At that time in Finland, there were only a few “new circus” companies and we asked one of these, Circo Aereo, to work with us to create a show and help us with the production.  We had no idea how things worked and how things were done!  Although the Finnish circus scene is small there is a really hard-working culture, an attitude of not giving up when things are difficult.

What makes Race Horse special? Do you have a concept, a theme or a motif which goes through all your works?

Rauli: I think we look at each work as an individual project but you can find many similarities between them. We want to be truthful to our idea of circus so we always try to tell the story – or express whatever the idea is – through our circus skills. We then like to add black humour and strange elements and then just sweat a lot – on and off stage!

In the end we do want to amaze and amuse people but in such a way that audiences don’t always have to react to everything.  We would still be there doing our thing with the same raw energy.

Your company is not short on daredevil acrobatics and your recent work has shown an aesthetic of chaos and play. How do you look for new ways to push the physical and artistic side of your work?

Rauli: I don’t think we really have to ”look” for new ideas, more or less the ideas comes to us. Always in circus, there is this strong sense of wanting to improve yourself and your skills as much as possible. I think the same applies to creating shows or coming up with ideas. You never want to do the same thing twice, so you start to think about a new way to surprise yourself or how you can do something you haven’t done before.

Has Super Sunday changed since we last saw it at the Roundhouse during Circusfest 2016?

Rauli: The show is still the same idiotic rollercoaster ride but, of course, we make small adjustments and we still like to push ourselves to make the show better each time. We have a playful mutual encouragement to boost each other to new limits.

Tell us about the wheel of death – an impressive but dangerous piece of equipment. Is it really as dangerous as it looks? Have you ever had a serious accident during practice or performance?

Rauli: It is everything you said and even more. The first time you get the thing up and walk on it, it’s already a thrilling experience. It makes your senses really alert – knowing there is a risk of injury at every step is  hard to explain. We’ve had a few injuries s with this machine. It’s not something I really want to talk about, but as a example one of our performers flew out from the top and broke both his ankles. Luckily, nothing more was broken! That’s why we have big mattresses under the death wheel in Super Sunday, just in case.

What should the audience expect from Around? Will adults enjoy it as much as children?

Kalle: I think all ages of audience will enjoy the show. At least that’s what Finnish newspaper Helsingin Sanomat said!

Kalle: Around is actually part 2 of my trilogy of shows for children with the same ringmaster character. The first one Circles  premiered in 2012 and the third Chevalier is coming out in 2019. Creating a show for children is fun because kids are so honest with their feedback and, if they are bored, they let you know. In a way it’s more challenging because kids detect emotions but don’t yet really understand things like irony or sarcasm. And most kids come to see the show with their parents so the show has to entertain adults at the same time.

Live music is being used more and more in contemporary circus and Around features two acrobats and a band of musicians. How important is music to your work and how collaborative is the process between the acrobats and the musicians?

Kalle: I like to work a lot with music because through music I started breakdance and through breakdance I started circus. In this show we use live music because it’s about traditional circus where music was always live. The music in Around is made to accompany the performance and the live aspect creates opportunities for interaction. And even the circus artists contribute to the music in Around – I made my debut in pan flute in this show which was fun.

Super Sunday and Around are on tour in the UK from 9 April – 3 June. For tour dates visit cryingoutloud.org/whats-on/