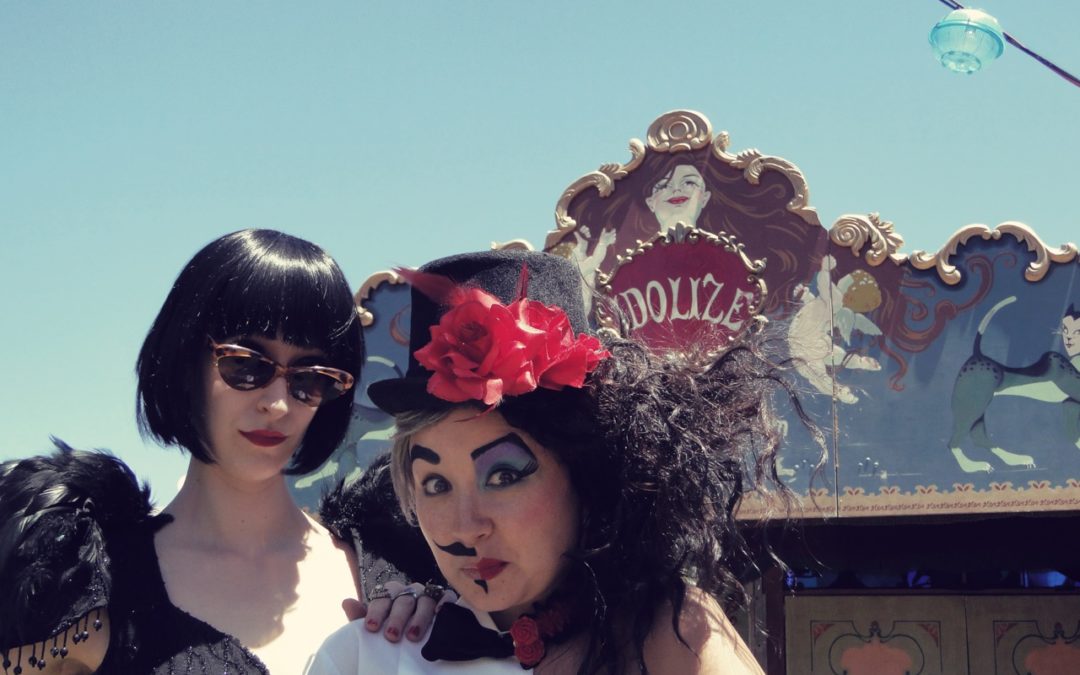 Our series continues with a new postcard sent to us from Bernadette Byrne and Victor/Victoria aka deviant duo EastEnd Cabaret. Having somehow sneaked past Australian immigration authorities, their first stop is Perth’s Fringe World Festival. How did they get on? 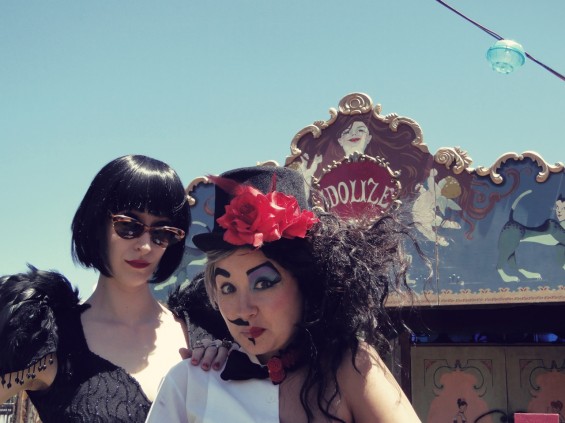 EastEnd Cabaret’s Bernadette Byrne and Victor/Victoria in front of the Idolize Spiegeltent.

Bernadette Byrne: Hello darlings! Wanted to send you a little postcard from sunny Perth, but then Victy lost it and spilled gin on it so it is now a week late…

Victor/Victoria: It was Bernadette that spilt that gin, whilst trying to arrange herself underneath a parasol. A crying shame it was, too.

BB: Anyway, the Fringe in Perth (known as Fringe World) was amazing! We arrived to see the stunning Idolize Spiegeltent waiting for us, the 36 degree heat waiting to force Bernie to become delirious from heat stroke at on least five different occasions, and two beautiful country “blokes” waiting to give us their spare room and introduce us to a liquor called “bundy”.

VV: Although I don’t really recommend it. After consuming a slab of pre-mixed “bundy and coke” I started babbling about the freshness of the “Fremantle Doctor“, my bets on an upcoming V8 supercar race and the possibility of landing a “white pointer” in a “tinny”. It’s as if I was speaking in tongues. I MUST stick to gin, even if it is in a can.

BB: This fringe festival is only in its third year, but it has grown so quickly that the city can hardly keep up! So many fabulous shows (including lots of our fringe friends and cabaret family), the place was buzzing with excitement.

VV: And the people we met, both on and offstage, were wonderful – and very pleased to welcome us to their town! Of course, the newest recruits to the Half-Moustache Army (Perth regiment) wore their moustaches with pride and supplied us with many deliciously cold cans of gin.

BB: We were so sad to leave, but it is nothing that performing at a country wedding followed by a ten hour road trip to Adelaide won’t fix. Onwards, to the next Fringe!

Will Victy or Bernadette catch the bouquet? Will the peripatetic pair have enough gin to last them to Adelaide? What new adventures await them there? Watch this space.