Picture This: Interview With The Live Scriber 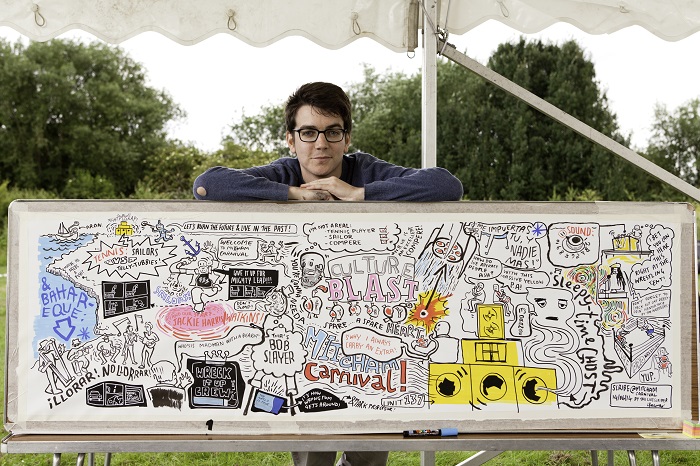 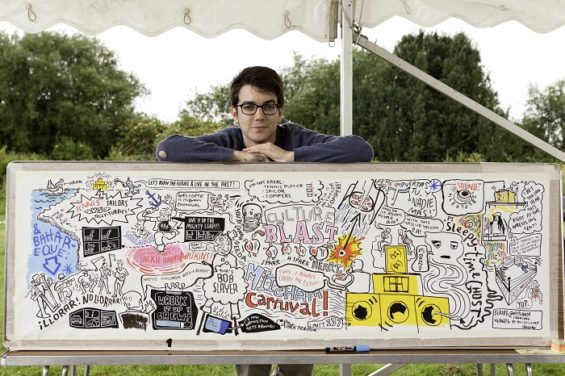 You can see Peter Morey at his interactive Doodle-a-thon-edy show next month.

This year’s Edinburgh Fringe will not be short on artists singing, juggling, stripping or cracking wise. Peter Morey, though, will be entertaining the masses in rather a different way. As an artist who brings “live scribing” to the world of comedy and other live performance, he creates massive inter-connected cartoon murals with his own lateral visual take on whatever unfolds.

Here’s an example of Morey at work.

Like many a cabaret performer, trying to fit The Live Scriber work into an entertainment genre would be like trying to nail jelly to an estate agent’s forehead (albeit less enjoyable). Londoners may have seen at the Soho Theatre but fringe-goers will see him at over 40 shows at the Fringe as well at his own show Doodle-a-thon-edy. Hosted by Bob Slayer and with special guests, Morey will combine comedy and doodling by turning acts and audiences alike into “live scribes”. The show will run at 1:20pm between 6-10 August at Bob & Miss Behave’s Bookshop (Venue 212) and feature human doodles, live projection, animation and prizes.

Before all that, we pinned down the Live Scriber for some questions about his art.

How did this all start? Did you scribe at school?

The proper ‘scribing’ started when I began taking exclusively visual notes whilst at lectures, then I applied this to watching TV and listening to people’s conversations. It was a way to encourage myself to draw all the time without inhibition. Eventually I started working on walls and getting asked to draw along to educational workshops as they happened. Then I was invited to scribe a performance poet in Berlin and shortly afterwards, a comedy show in London.

I say it started then, but actually it started with my constant doodling. I have doodled as long as I remember, and so in this sense yes: I scribed at school. I believe that doodling can be an unconscious or semi-conscious filter for words heard. It can be seen as a lateral way of learning which is rarely officially recognised. My version of ‘scribing’ is a slightly more directed, conscious version of this principle.

Oh and also: I teach English as a foreign language, and I have always drawn pictures to communicate with my students. That’s a kind of instructional ‘scribing’-type activity I guess.

Which materials do you use?

For scribing: I use poster-paint pens of various colours, sizes and nibs. I sometimes use brush-tipped pens and sometimes I break out a bottle of india ink for dipping. The paper is smooth, good quality and comes in a big roll.

I have scribed using whiteboard markers and a whiteboard, however. 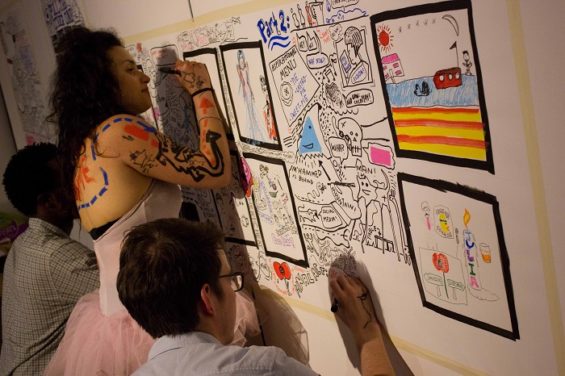 Which artists have inspired your work and your drawing style?

That’s difficult to say specifically, because part of the ‘doodle principle’ that I go by is that images come out intuitively, without too much prior reflection. My favourite artists would influence this: People like Keith Haring, Bill Watterson and Paul Klee. I’m also influenced strongly by ideas coming from educationalist-practitioners like Ivan Brunetti (a cartoonist), Lynda Barry (another cartoonist), Scott McCloud (yet another cartoonist), Jean Debuffet (historic exponent of ‘Art Brut’) and the Oulipo literary movement (especially Raymond Quineau). Some influences filter in from my Philosophy degree: These are more to do with the applied lateral thinking than drawing style, but all of these things feed into one another.

Have you thought about scribing outside of comedy like an opera or circus?

I have scribed teachers’ meetings, conferences, workshops, music gigs, a borough carnival, a news programme and a couple of radio shows. So yes, I try to push the activity into new contexts and innovate as much as possible. 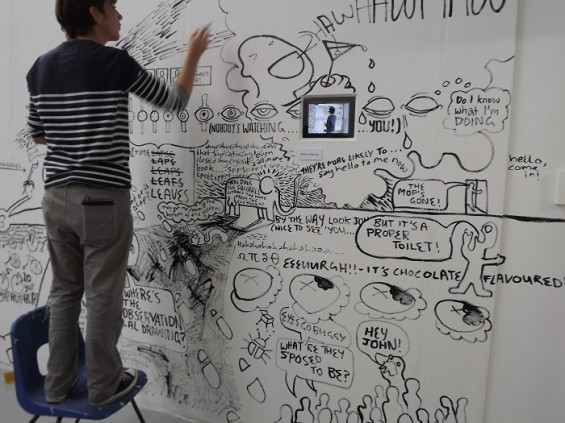 Have you ever tried out standup for yourself?

I have never tried stand-up myself, although my English language lessons can feel like standup routines sometimes. The closest I’ve gotten to stand-up proper would be when I was a roaming English-language storyteller for primary school students in Spain. The sessions were interactive so the students would have to act out the various roles as I told the story.

What makes a good standup in your eyes?

As a relative outsider to comedy, I cannot say definitively what makes a good stand-up comic. My preferences, however, are for the cerebral, the surreal, for engaging story-telling, and for an atmosphere of inclusivity rather than direct antagonism. I also enjoy it when comics play with the expectations of the audience: a comic who is always changing up who exactly the joke is on can be exciting to watch.

What are you up to after the Fringe?

After the Fringe I am moving back to London to continue with my scribing adventures.

Full information on Peter Morey’s Doodle-a-thon-edy can be found here.