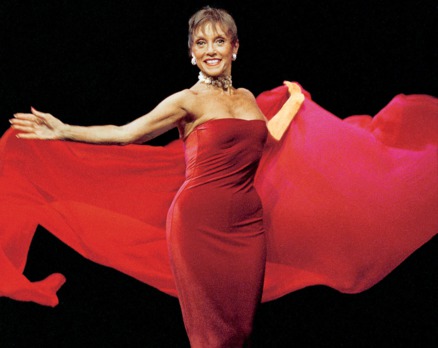 It’s not often you get to spend the night with someone who danced with Fred Astaire, drank with Dean Martin and did who-knows-what with Elvis.

It’s been eleven years since Liliane Montevecchi played London. Then she enthralled Pizza on the Park, now it’s Crazy Coqs where French ambience seems a better match to her show Paris on the Thames. And even if old French poodles really don’t learn new tricks and the routine is unchanged, her voice sounds richer and another decade adds perspective and polish to her life and work.

Montevecchi started out as a ballerina, like Lesley Caron or Zizi Jeanmaire in pointe shoes at 9. Cutting a slender figure, she moves about the stage with agile grace and throws herself about for comic effect, groaning as she jumps up on the piano. At 82, she can still put her foot over her head which was enough for the audience to burst into spontaneous applause.

After an MGM contract she left Hollywood for the Folies Bergère then to Broadway almost by chance in the musical Nine, for which she auditioned singing a capella La Vie en Rose dragging a mink coat in a self-parodic caricature of the femme fatale. She’s still doing it, although she no longer wears mink.

Follies Bergère was a highlight of her act in 2004, but this time around the vocals seem under stress and forced. But even if a few top notes and lyrics get lost, you cannot forget you are in the presence of an experienced performer with genuine joie de vivre. She never takes herself too seriously either, cracking jokes and laughing out loud.

It’s a slightly predictable melange of French songs and classics like Cole Porter or Jacques Brel. As she opens with the number Paris Canaille, music director Nathan Martin shouts ‘I hope you all understand French, otherwise you’re going to get a headache!’ Even though the songs will be familiar to anyone who saw her before or who has her album On The Boulevard, she has the knack of making her delivery seem fresh and spontaneous.

Humour carries the show. Sondheim’s I Never Do Anything Twice is a great song from a rotten movie (The Seven Percent Solution) full of double entendres about never returning to the same lover. She milks it with the shameless fervour of Marie Antoinette in the dairy at Versailles, laden with carefully chosen pauses and knowing stares at the audience. And by the time she gets to “Yes I know that it’s…hard” the more mature “gentlemen who moisturize” in the audience were howling with laughter like they’d never sung it themselves drunk in a piano bar at three in the morning. No?  Just me, then.

She prowls the audience in Je Cherche un Millionaire – no luck in this crowd Liliane, cherie – grabs an unsuspecting member of the audience to join her on stage in New Fangled Tango – debatable whether it’s her version or Lena Horne’s that was the smouldering definitive – and tells him off when he moves.

Equally memorable are her reflective moments when you feel her connection to Paris. Irma la Douce sounds even more full of longing and regret when shorn of Shirley MacLaine’s noisy theatricals and phrased with pathos and meaning.

When she closes her first set with Cole Porter’s You Don’t Know Paree, she reflects on her age, the people she has lost and time gone by. It is a beautiful pause to contemplate the end of an era and a style of performing, and appreciate a master artiste from a past generation. To be full of life and energy at 82 is something to admire when many find their world shrinking and the door of “Shady Pines” beckons.