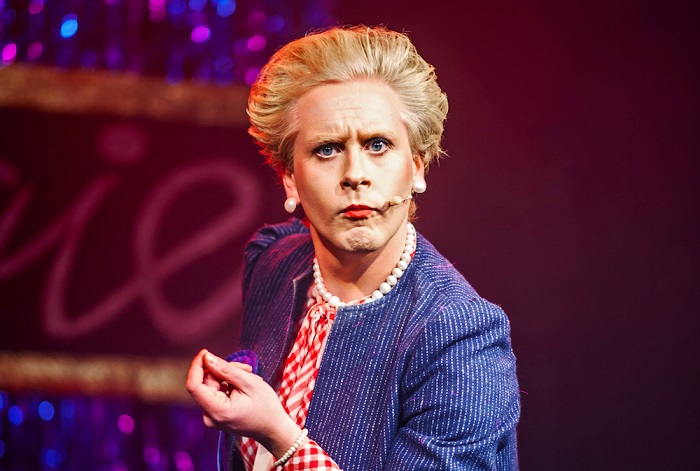 The United States is getting closer and closer to choosing their next commander-in-chief and who better to evaluate the remaining candidates than the Iron Lady of cabaret, Margaret, Queen of Soho?

It’s me, former British Prime Minister and current global cabaret superstar, Margaret Thatcher. You may remember me from the hit film The Iron Lady and its sequel Mamma Mia.

Now if you ever doubted that I’m the best politician ever you need only look at the American elections. Even Sinéad O’Connor would say nothing compares to me. I’ve got better legs than Hillary, I’m more down with the youth than the 74-year-old Bernie Sanders, and unlike Ted Cruz, I don’t look like a cross between a melting Liberace and the Count from Sesame Street. But there is one candidate who has caught my eye, and so I write to you today to wholeheartedly endorse Donald Trump to be the next American President.

Why? Well, aside from the fact that he’s the only male politician who spends as much time styling his hair as I used to, I think “the Donald” will really sort that country out. Finally, there’s someone with the bravery to promise to build a hugely expensive and impractical wall between the US and Mexico – as everyone in East Berlin can attest, they work out great!

Also, he’ll make America strong again. At the moment they only have the second largest army in the world and spend more on defence than the next 10 countries combined (most of which are allies). At the moment the US is practically the little pig who made his house out of straw! If you elect the Donmeister, he will not rest until he’s destroyed every single last trace of ISIS. In fact, he’ll be so thorough that he’s going to destroy every branch of the budget hotel chain Ibis as well.

And who better to fix the bankrupt economy than a man who has had to recover from bankruptcy again.  And again. And again…

But, of course, he has his detractors.

Some say he’s trying to attract the white supremacist voters – but how is that possible? He’s not white! Donald Trump has been bright orange since his skin was permanantly stained with fake tan in the 1990s. Some say he shouldn’t have alluded to the size of his penis in the debates – but that’s what I always did in PMQs. And some say he thinks women are stupid…which he does. But they seem to vote for him anyway, so maybe he has a point!

Look, as we all know America is the most exceptional country in the world – with all of the resources at their finger tips, all of their experience, and all of their economic advantages, it truly exceptional how poorly educated, socially immobile and regressive their country is!

Who better than Donald Trump to manage your decline?

Because ultimately, while other politicians can be corrupted by listening to lobbyists and special interest groups, Donald Trump won’t. I can solemnly promise you now that he categorically will not listen to anyone!

Margaret Thatcher Queen of Soho will be at the Udderbelly Festival at London’s Southbank on 21st April, 19th May and 15th July 2016. Show details can be found here: http://www.udderbelly.co.uk/whats-on/margaret-thatcher-queen-of-soho