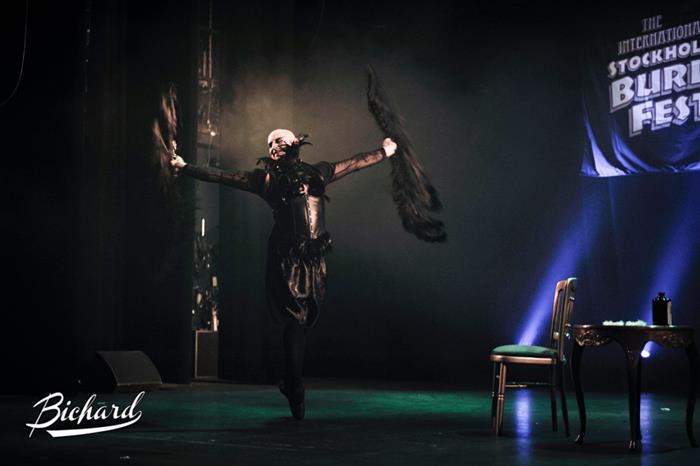 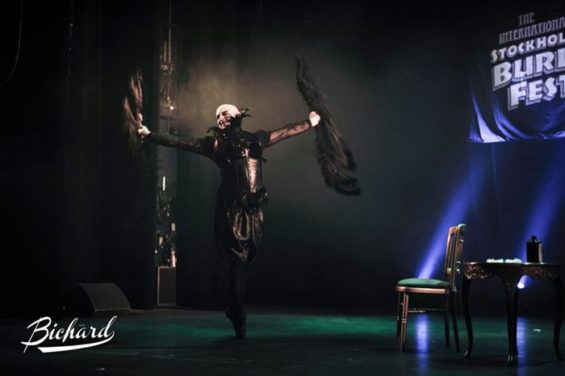 While boylesque may be escaped the attention of the judges of this year’s  London Cabaret Awards, Ipswich-based practitioner Lou Safire is an illuminating modern example of its attractions. As well as being a dab hand at stripping, he is also a skilled fire-breathing sideshow artiste and pole dance teacher who runs his own body modification clinic, Twisted Monkey.

In 2013, he was invited to take part in the Stockholm Burlesque Festival. When he came back, he exclusively wrote for us his account of what sounds like one hell of a jaunt.

Last October, I was lucky enough to be part of the third International Stockholm Burlesque festival. Produced by Fräulein Frauke, John Paul Bichard with support from the Amazing Knicker Kittens, this festival was held over the 3 days of Friday 4 October to Sunday 6 October.

Beautiful venues The Sodra Teatern and the Nalen Ballroom both hosted a show each as well as Octbooberfest, a tassel twirling contest to raise awareness for breast cancer. On the third day there was a vintage sale called Burleskloppis with performances throughout the day.

Both of the main shows were headlined by Mr Pustra and Banbury Cross (both UK) and Minnie Tonka (USA) with Armitage Shanks (USA) providing some wondrous compere skills and keeping the shows flowing.

I arrived in Stockholm a day ahead of proceedings on the Thursday with fellow performers Daisy Black and Trixi Tassles. This gave us a chance to explore some of Stockholm. Mainly we spent our time in Old Town, a part of the city which has some astonishing architecture and cobbled streets.  We were impressed at how clean the streets were as well as the buildings.

Friday night’s show was held at the Sodra Teatern. This theatre is beautifully presented with three tiers of seating and a large stage. Featuring twenty performances, this show was jampacked with an array of styles. There was puppetry from Canada’s Champagne Sparkles, acrobatic dance from Miss Acrolicious & H’andsome Stark of Finland right down to classic burlesque from producer Fräulein Frauke.

Several acts stood out the most for me and I hope to see more of them. Apathy Angel (USA) arrived on stage as a classic style showgirl in a goldfish tail ball gown. All of a sudden she was pouring a massive box of sugar over herself the routine turns to hip hop and with the Angel ass-tassle twerking to the limits. All attitude and tease, this is one fierce performer. And talking of twerking, the line of the weekend came from Trixi Tassles (NZ): “Miley Cyrus can suck a dick!” That’s her told.

Fellow male burlesque performer Willy Waterlilly (FIN) and his Love A Man And His Horse act was a delicious rollercoaster ride. What started as comedy gave way to bondage with sexy boot polishing, horse riding to dance music. Introduced by compere Shanks as “breaking modern decorum and a number of international laws”, the Finn pulled no punches with one surprise following another and finally ending his routine in pasties, a g-string and a cat-o’-nine-tales tail. This is one truly spectacular act.

A master of dark chanson, Mr Pustra sang a haunting rendition of Jack’s Song from film The Nightmare Before Christmas. Burlesquer Banbury Cross’s whip-cracking Wild West number was followed by Minnie Tonka who topped off the night with her fabulous use of a telephone wire. 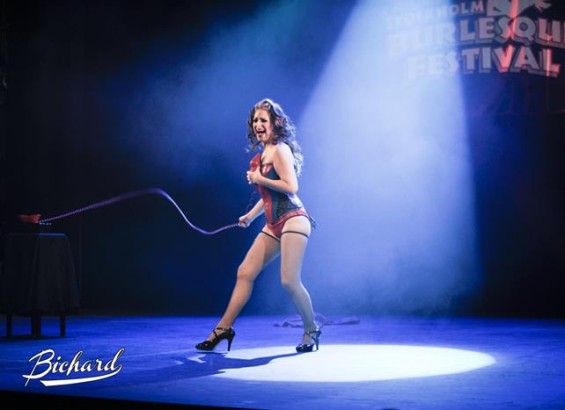 US star Minnie Tonka at the Stockholm Burlesque Festival 2013

On Saturday night it was the turn of the The Nalen to host the next spectacular. Starting the night was the Octbooberfest tassel twirling competition. This was a twirl to the death! Having been made to do tasks whilst twirling (at least one tassel must be spinning at all times) and a couple of unfair tag outs (the audience made their disapproval well known!) London-based Aurora Galore took the crown for 2013.

The Nalen comes with gilded everything and is the home of Fräulein Frauke’s own show.  Within its great hall, this set the atmosphere for another superb show. Host Armitage Shanks opened proceedings with a wonderful carnival freakshow style song called Wicked Fascinations.

With 15 acts on the line up, starting the performances was Lou On The Rocks (FR) with a fiery oriental bump ‘n’ grind silk veil fan dance. Swedish performer Mr Gunner, the only male performer to enter the  tassle competion, gave us a taste of his own style. Calling it “macholesque”, it is a comedic combination of burlesque and Braveheart. Polishing his massive sword and teasing the audience with his sporran, Mr Gunner is the butchest male burlesquer I think I have seen.

The trio of Ivoncita & her Matadores de Amor (SW) demonstrated remarkable synchronicity throughout their whole act which saw a housemaid with two drunken sailors samba their way through a transformation from maid to carnival queen.

Jacques Patriaque (AUT) knows how to work the crowd. His performance as a sixteenth-century vampire dressed in a large white wig and white lace coat is nothing but pure camp comedy. Teasing the audience with a severed foot and some striptease, this superb number ended with Patriaque laying on an Ottoman staking himself while blasts of red confetti flew out across the stage.

Mr Pustra made my night with a song from one of my favourite films Hedwig and the Angry Inch. Minnie Tonka gave another spectacular performance this time with a space age theme while Banbury Cross dazzled with a fierce number while dressed all in red. The night was topped off with  one hell of a band. A 1950s styled rock and roll  group The Troubled Three (SWE)  got the whole crowd dancing and in the spirit of burlesque by the end of their set they were all in their underwear! 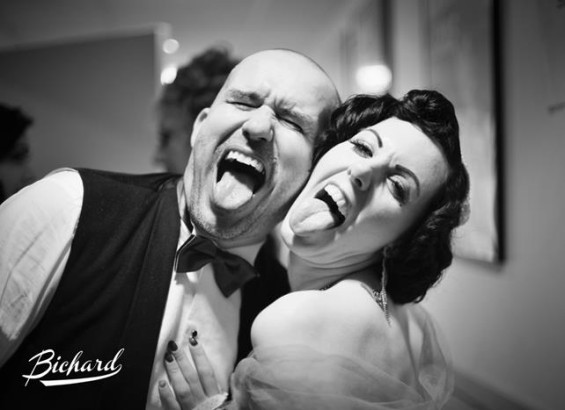 On the last day of the festival, Daisy Black, Trixi Tassels and I headed to Burleskloppi, a place full of vintage boutique stalls. There was plenty here for the ladies, less so for the men unless they were in the market for an army uniform.  None the less, it was busy with women rummaging through rails and with their partners on hand to hold their bags of bargains and watching the performances there throughtout the day.

We didn’t stay long there because it was so hot and we were still recovering from the night before. We spent a few more hours wandering around before heading over to the house of festival organisers Fräulein and John Paul where we had dinner with them,  Minnie Tonka,  Armitage Shanks and Lady Bona (who had flown over just to see the Festival).

Over Mexican food and a few beers we chatted away over all sorts of things and rounded up what we all thought of the festival and our best bits. The whole weekend was an amazing experience and a brilliant festival.  Every single performer through to the stage management was exceptional and knew what they were doing. This was my international debut and I loved every single minute of it. Stockholm is a wonderful city, from the buildings right down to the food and I have every intention of returning for a holiday ( and hopefully perform) to explore the great city.

Information on the Stockholm Burlesque Festival can be found on their official website: www.stockholmburlesquefestival.com