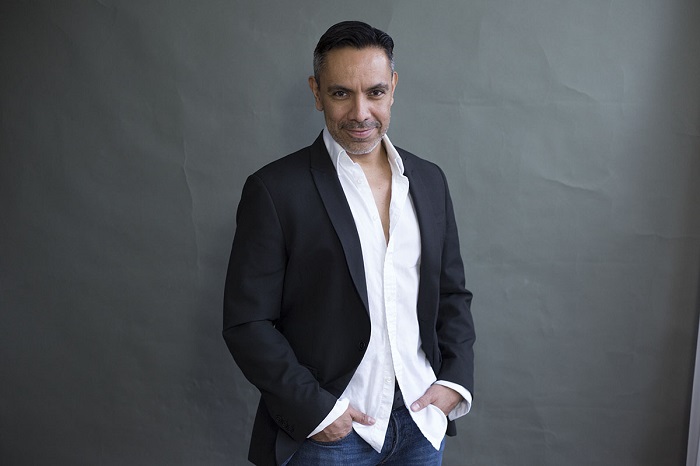 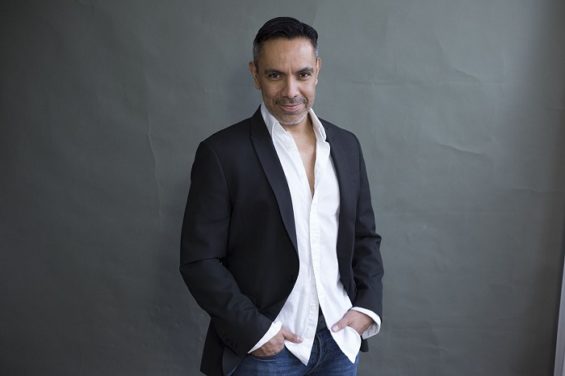 The thing about David Bedella is you’ve heard the name but can’t immediately place him: he even plays on this with cabaret audiences who aren’t sure where they’ve seen him. With his striking saturnine looks and rich and remarkable baritone you think he must be a Phantom or a Valjean, and his pansexual persona surely pins him as an Emcee in Cabaret or Cage aux Folles’ drag diva.

None of the above.

He won his 2004 Olivier for a Satanic supporting role in Jerry Springer The Opera and his last performances I enjoyed were as Arnold Beckhoff the gravel-voiced protagonist of Torch Song Trilogy at the Menier, and Abanazar in Wimbledon’s Aladdin which featured the miscast Jo Brand as a hapless genie.

But he is a bigger personality than the sum of his parts, and clearly beloved of his Sunday night audience in the St James’s Studio although he hasn’t been here before and his stage schtick seems to be a combination of finding his way round and begging to come back. Which he should, although next time please with more forethought and structure because this was an evening of randomness on a near-amateur scale were it not for the professional virtuosity of most of the participants.

Before a rare Barry Manilow 70s composition called Lay Me Down and Roll Me Out to Sea delivered gently as a spiritual, he kicked off with a well-boosted Smooth by Santana accompanied, if that’s the word, by an urgently gyrating dancer named Jonny Labey gurning like crazy and obscuring the sightlines. Since Labey was dismissed after the opening number his purpose other than as protégé seemed obscure until it was revealed he’s in his final year at Bird College and playing Graffiti Pete in Bedella’s current show In The Heights at Southwark Playhouse which, incidentally, I’m reviewing on Friday so I’ll get them twice in one week.

As I will an extraordinary lady named Eve Polycarpou whose hair Bedella told us he styles for her before the show. Heaven knows what the “before” picture might be but the “after” looked like someone had given Miriam Margolyes extensions and an electric shock. She closed the first half with a pair of plangent homespun Cypriot folk pieces which were so school-of-early-Eurovision parodic that I first thought she was a comedienne rather than an earnest feminist singer with serious points to make about the Turkish occupation of North Cyprus, but the audience lapped her up too.

Adopting a chat show format, Bedella interviewed the elegant and amazingly inventive Sacha Regan, pioneer of all-male Gilbert and Sullivant operetta at her own venue the Union Theatre and she showcased the work of three of her current touring cast, pianist Alex Weatherhill, fabulous room-silencing falsetto Alan Richardson and elegant bass-baritone Neil Moors whose rendition of Bright Moon was an admirable balance of power and control.

The evening was billed as David Bedella “and friends” and his guests were almost all drawn from his recent shows – Aladdin for the band, Pinafore and In The Heights as he also introduced Christina Modestou and Emma Kingston who are fine singers but their songs pretty meaningless when decontextualised from the musical.

His closest and best friend, though, and clearly relaxed enough to turn up in a gardening jumper and swap divorce stories, is Douglas Hodge now in the final week of his year heading the cast of Charlie and the Chocolate Factory: they cuddled, kissed, chatted and bitched happily at each other for quite a while before Hodge took a rare opportunity to do non-theatrical material and accompanied himself on the piano to Stevie Wonder’s All In Love is Fair.

This was a genuine and glorious highlight, everything Bedella himself sang was also completely enjoyable and he engages so well with the audience both on-stage and walking around the auditorium where he puts everyone at ease. Just a bit too much rambling chat.