Let Me Be Frank: Michael Feinstein at the Adelphi 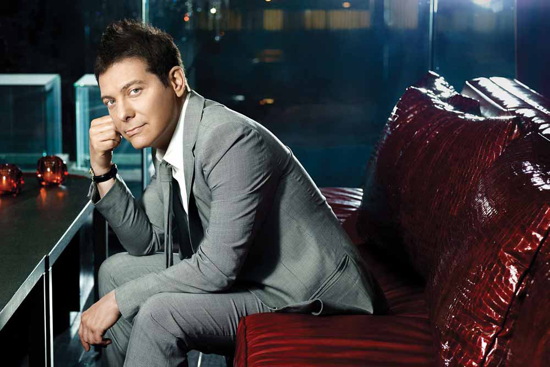 ‘Wanna Sing a Show Tune’ starts Michael Feinstein, cementing a career which has stretched across thirty years of meticulous analysis and delivery of the entire catalogue of the ‘Great American Songbook’ – a songbook which, he tells his British audiences, is truly international. Although he then sings forty songs written by US composers.

In case you have been under some impervious rock sheltering from the radiation of musical theatre, Michael Feinstein is a phenomenon with unique links to the golden age of Broadway melody – a protégé of the late Ira Gershwin in whose house, as a musical secretary in his twenties and Ira’s octogenarian dotage – he served the sort of apprenticeship Sondheim did at Oscar Hammerstein’s knee, eventually inheriting the sheet music archive of the Gershwin brothers. Perhaps Sondheim is fortunate Feinstein didn’t also go down the composer-lyricist route and create rivalry – and it could have been a bitter one, Sondheim referred to Ira’s lyrics as ‘rhyming poison’ – but as he confesses, songwriting is ‘tricky’ and it’s difficult to arrange the notes any differently from how it’s been done before.

Instead he has diligently trademarked a forensic and inventive approach to the back catalogue which can deliver a seventy-year-old lyric newly minted. He has an extraordinary ability to make you hear a vintage song as though for the first time with his soft but crisp diction, carefully-controlled flexibility to adjust tempi and emphases, and a perfected fusion of vocal melody and piano when he plays.

I think he’s best as a crooner and love the tenderness he brings to romantic or regretful torch songs, but now in his late fifties he’s developed an astonishing top belt to which more and more of his arrangements ascend for a climactic finish. Even fronting a 17-piece band, led with skill and fervour by the veteran Larry Blank, he’s always on top of the sound.

He gauges his audiences with some tentative Jewish mother jokes, and a camp impersonation of the flamboyant 70’s American comedian Paul Lynde to see how ‘gay’ he should make the banter and/or how long are the memories of his audience.

It’s an interesting duality – I’ve seen Feinstein entertain a New York theatre audience like a bland bar mitzvah singer with no edge to the performance, and was afraid he’d lost the puppyish cheek which characterized his earliest work. It’s still there, but it’s carefully measured out and while cosmetically he now facially resembles Andy Williams – there’s an occasional welcome outbreak of Kenneth.

And, at last, when he sings Gretchen Cryer and Nancy Ford’s ‘Old Friend’ he now includes the line “and she wonders at my taste in men”. Feinstein was married – by Judge Judy – to his long-time partner Terrence Flannery in 2008.

His set ranged from familiar standards like ‘Embraceable You’ which he underscored with fifteen other Gershwin melodies, ‘Hooray for Hollywood’ and a thoughtful ‘Broadway Baby’ and he’s become more keen to play just a few bars of accompaniment before jumping up with the microphone to deliver the more freely swung numbers like ‘Such A Lot of Living To Do’ although I’m still unconvinced he’s a natural jazz groover.

The two sides of his musical personality were reflected in differing versions of ‘Fly Me To The Moon’ – one slow and reflective based on the original waltz setting preferred by its composer Bart Howard and another introducing Feinstein’s most dramatic medley, a fifteen-minute barnstorming finale of music made famous by Frank Sinatra.

Feinstein is a recent but almost messianic convert to the Sinatra cause, releasing a 2008 album The Sinatra Project – but I have never heard him deliver these numbers with such power and drama, it really was the most mesmerizing piece of cabaret work: not a homage, not an impersonation, but applying his individual talents to a song set made famous by this most famous and revered of male vocalists – is a challenge few performers would find the nerve to undertake, let alone pull off with such bravura.  It was totally thrilling.

But – as Feinstein sings in another lyric – ‘Here’s to us, who’s like us? Damn few’.