The Story And History Behind Velvet Curtain Cabaret 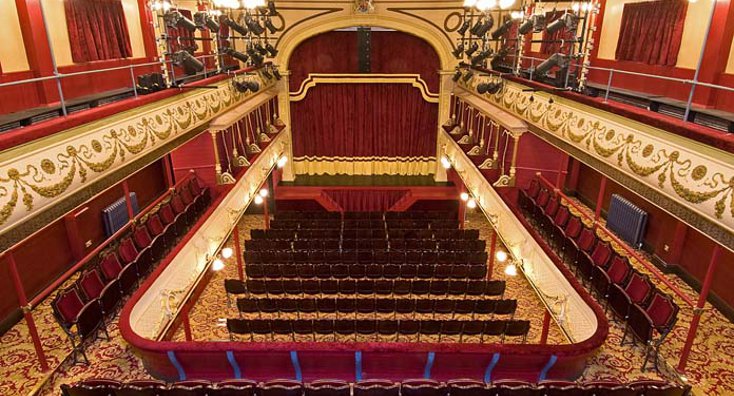 This week, vaudeville returns to one of Yorkshire’s iconic music halls. On 27 May, the City Varieties Hall in Leeds will host The Velvet Curtain Cabaret, a show with a phenomenal line-up of burlesque and variety headlined by Kitten ‘N’ Lou (voted top of the latest global Top 50 poll). This special night is co-produced and starring Havana Hurricane  and Penny Sweets of Leeds Burlesque. We spoke to Penny and asked about the gem of a venue and what they have planned for Friday.

I remember the very first time I set foot inside Leeds’ City Varieties Music Hall. It was in 2008 before the venue was fully restored by a National Lottery grant but, everywhere I looked, I had that feeling of overwhelming opulence: the drapes, the plush claret seating, the soft golden lights dancing and reflecting on every gilt cornice.

This place is undeniably special. Built in 1865 and hidden down Swan Street, a side road of one of the city’s busiest shopping districts, you could be forgiven for not even knowing City Varieties is there. A hidden gem, the theatre is beautifully preserved as a theatrical time capsule retaining the very essence of the music halls of the 1860s.

From that first moment, I knew that I wanted to be on that stage, to tread the boards that had once lain beneath the feet of such greats as Harry Houdini, Charlie Chaplin and the “Queen of the Music Hall” herself, Marie Lloyd. 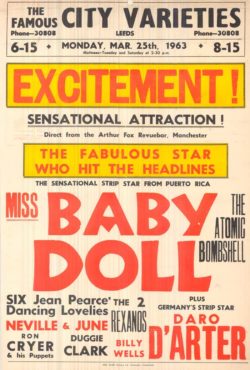 With a reputation of bringing top class entertainment to the masses throughout the coming decades, City Varieties became renowned in the Fifties and Sixties for presenting some of the biggest names in burlesque. The venue quickly gathered a reputation for being a hot spot for northern vaudeville, providing stunning fan dance, comedy burlesque and setting hearts racing with saucy “bump ‘n’ grind”.

At its height in the 1960s, burlesque performers such as Puerto Rico’s Baby Doll, also known as the Atomic Bombshell, and the UK’s very own Rhoda Rogers were frequently gracing the stage. As the glitter settled over the years, burlesque fell out of favour with the public and, although the cabaret continued at City Varieties, the fare was far more family-friendly with only the memories of our peers and the fallen sequins between the cracks in the boards remaining.

When burlesque beauty Havana Hurricane joined me in running Leeds Burlesque last year, I knew that my new business partner was a kindred spirit, we shared a vision of bringing about a burlesque revival to the old music hall. After a lot of tough negotiating and some gentle pleading with the venues management team, we agreed terms and were given the tour.

I remember so clearly that we both held our breaths as we climbed the steps on to the beautifully raked stage. This was it, the moment we had both waited for greater part of a decade for – and it was magical! The lights seemed more even more brilliant as we stood in silent awe and imagined the rows of plush seats filled with happy faces. We felt at home.

We wanted to bring a regular cabaret night that would echo the music hall revues that the venue was so famous for. With the memory of the lavish furnishings still clear in our minds, the name seemed to come so naturally and that is where The Velvet Curtain Cabaret was born.

So on the 27th May 2016 we are bringing a line-up of some of the greatest names in cabaret, a stellar international cast bringing us burlesque, drag, singing, sword swallowing, knife throwing, hula hoop, mind reading and even a few surprises that we are keeping well and truly under our hats. 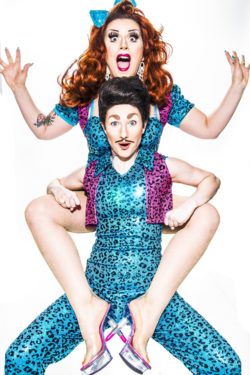 Known as the worlds “Show Busiest Couple”, Kitten ‘N’ Lou were voted number 1 in the world in the latest Top 50 poll run by 21st Century Burlesque and received the “Most Comedic” accolade from the Burlesque Hall of Fame.

Known as Australia’s Sweetheart, Kiki has been seen on BBC’s The Voice (where she was championed by WillIAm) and none other than the Sydney Olympics! Kiki is quite rightfully the UK’s most sought after burlesque chanteuse!

Death Do Us Part Danger Show

Charlie and Rachel Atlas, a husband and wife duo who are pushing the boundaries in modern vaudeville bring the kind of knife-throwing acts that would previously only be seen in a circus of yesteryear to modern cabaret.

One half of Leeds Burlesque, having performed all over the UK, Europe, America and Australia; Havana is a shimmy shakin’, earth quakin’ whirlwind of an international burlesque sensation!

Featured on BBC’s Symphony for Yorkshire and a Double R Club regular, Em Brulée has performed her velvety vocals the length and breadth of our fair Isle.

Gossamer Thread’s Vaudeville Company is made up of aerialist, razor-blade swallower and spinner of hoops Daisy Black, and Alex McAleer, who combines contemporary mind reading with a flair for showmanship.

Finally, taming our troupe of vaudevillians is host and compere for the evening, the second half of Leeds Burlesque; Penny Sweets

We’re delighted to both be able to feature in our first show and you can be assured that the second is already in formation, and it promises to be an extravaganza that will stay true to our ethos of true variety.

More information on the The Velvet Curtain Cabaret can be found here; https://www.cityvarieties.co.uk/Online/VelvetCurtain

Playbill is courtesy of Leeds Library and Information Service. More information on them can be found at www.leodis.net/playbills