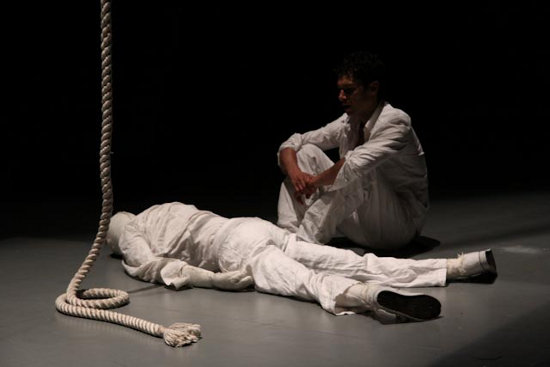 John-Paul Zaccarini is an internationally renowned circus practitioner, director and academic. His exciting project ‘Circoanalysis’, the incorporation of psychoanalytic concepts into circus work, is the result of years of research and development.

Originally trained as a dancer, actor and mime, he entertained the Queen on the opening night of the Millenium Dome, directed the Gandini Juggling Project and toured with DV8 for their Enter Achilles shows.

John-Paul Zaccarini in Beside Myself

After his lecture at this year’s Circusfest, I caught up with him to ask him more about his latest project.

Circus is generally viewed as a very physical discipline, and psychoanalsysis is a very intellectual approach. How is the application of psychoanalysis useful to the process of performing circus?

It’s an interesting split you bring up about the physical/intellectual. Circus is primarily about the body, and so is psychoanalysis, but only insofar as that body is inscribed in language, or demarcated, described or understood through language. Circus may not be intellectual but it is a body of knowledge, the same way that psychoanalysis builds up a knowledge about the body and how it deals with its intellect.

How does Circoanalysis work in practise when you are directing/choreographing?

Obliquely – by listening rather than telling and by encouraging the artist to discover what they knew all along but didn’t know that they knew.

Psychoanalytic theory has often been deployed in other fields as a mode of disassembling work, so its interesting to think of it as a mode for the construction and development of work. How have your students responded to Circoanalysis?

At times with difficulty, with resistance and then once they understand the roots of their decision to do circus, and to whom they address it they seem to feel liberated rather than berated by the difficulties of the technique.

As a circus artist, what drew you personally to psychoanalytic theory?

The death drive, seduction, masochism, fetishism, jouissance and also psychoanalysis as a philosophical position, how, in the Lacanian paradigm it takes up themes from Heidegger, Kant, Aristiotle to name just a few.

It was fascinating what you said about safety zones in your lecture, whereby the circus performer transforms the safety zone (eg for the aerialist the ground becomes dangerous and rope a safe space), and also about the performer’s nerves at not knowing who is going to be out there watching. To what extent would you say the relationship between performer and observer is symbiotic? Do you think the performer is tied to his or her need to please the observer?

The work of circoanalysis is to untie that need to please the other/Other. The symbiotic element is at once the most glorious aspect of the performance but also the one that keeps it stuck in infantile fixation.

Freud wrote that ‘the aim of all life is death’ – how does the Death Drive factor in to Circoanalysis?

More than a wish for death/suicidal tendencies, or even a return to where one came from, the death drive is about an excess that spills over utilitarian forms of enjoyment, it’s useless, senseless, a headless chicken. Most of all it appears in “jouissance” – in that pleasure which borders on pain or that pain that turns into pleasure. The drive wants to exhaust itself.

… and what about the Oedipus complex?

Oedipus is central to psychoanalysis, and that little drama conditions many of our future relations and interactions. However it’s legacy is the super-ego, the law, the constant threat of castration (a taking away of pleasure) and prohibition – circus artists love to break the rules, test their limits for the pure pleasure of it – in a sense they refuse castration.

Moving away from psychoanalysis, what do you think defines the difference between a commercial circus act and an act motivated by the artistic aspirations of the performer? Is it possible to combine the two without some sort of compromise?

The commercial act is defined by the demands of the Other. The artistic act does not define itself in terms of how it can please the Other (whether the Other here is the Market or the School in a position of authority – see Oedipus above) If one can properly delimit the subject of circus and the object of circus it’s perfectly possible to make money with the Act at the same time as producing genuine and authentic artwork alongside.

Circus is increasingly being incorporated into theatre, but it sometimes seems in danger of being used as set dressing rather a piece of work in its own right. Do you think theatre directors struggle with the concept of circus?

Yes. But then the circus artist is too often more than willing to be a warm prop.

On the London cabaret scene circus, is in vogue. A lot of it seems very influenced by burlesque. Do you have an opinion on burlesque and incorporation of it into circus?